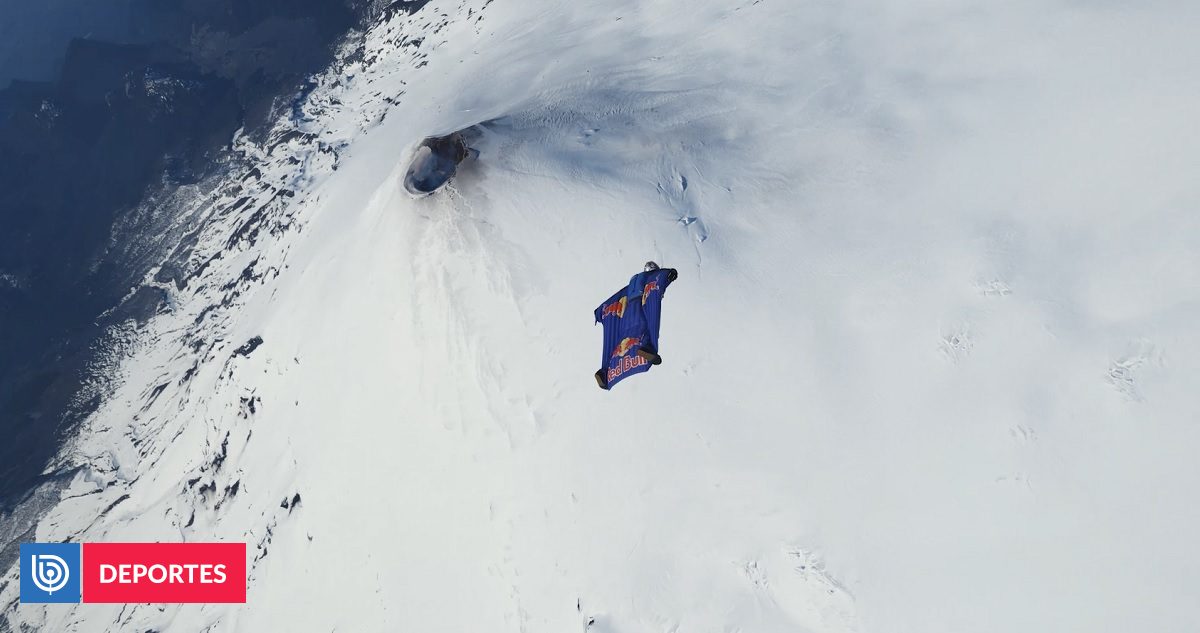 The Chilean athlete Sebastián ‘Ardilla’ Álvarez broke all his records with a remarkable project: he entered and crossed the Villarrica Volcano with a brilliant flight technique.

Known for being an athlete who pushes the limits and for the creativity of each of his projects, the outstanding Chilean paratrooper Sebastian ‘Ardilla’ Álvarez, shocked the world again with the images of his last great sporting feat.

It is an incredible wingsuit jump into the Villarrica volcano crater, located in the Araucanía region, in the one that enters between 7 and 10 meters and then emerges only using its wingsuit suit, with a flight speed of 280 km / h.

To achieve this feat (never before attempted in an active volcano), the athlete resorted to the wingsuit flying “flare” maneuver, which consists of using the vertical energy of descent during a flight to generate horizontal energy and finally vertical energy again.

This allowed the ‘Squirrel’ to dive into the volcano and then exit it without the need for an additional power source.

“It is a maneuver that can basically be done on any flight, with a good suit. But it was an active volcano, which was something that had never been done before ”, Álvarez explained, in an interview with BioBioChile.

The athlete Dani Roman, who recorded the feat of the national athlete, explained the essence of the project in this way: “Basically what ‘Seba’ has done is fly with his own body, enter an active crater and fly out of there. Simply with its body, without a motor, with just a little fabric ”.

This project was born a year ago, when Sebastián Álvarez, a former FACH pilot, thought of combining two ideas: show the beauty of Chile in a unique wingsuit jump.

To do this, he and his team toured different parts of the country, but upon reaching the Villarrica volcano, the consensus was unanimous: its 200-meter diameter crater, its conical shape and the exuberant beauty of its surroundings, was the best option that could imagine… It was the place to make history.

“We were able to realize that it was feasible to do this. It was an active volcano, super dangerous, it has its dark side, a life of its own. One did not know what could happen exactly, but there were the conditions we needed ”, stressed the ‘Squirrel’.

For a feat of this level, a lot of previous work was needed, since although Álvarez had in his head an idea of ​​the volcano and its space, the measurements of the diameter of the crater had to be exact so that the physical maneuver of the athlete was possible and successful. .

But it wasn’t all math. Sebastián spent months getting to know the volcano little by little, its rhythms, the intensity of its columns of smoke, the smell of sulfur, the speed of the wind, the weather, the airspace, among many other factors.

As it is the most dangerous volcano in Chile, with frequent eruptions and the ability to generate lahars, it had an unpredictable component and also “a life of its own”, as Sebastián coined.

Some days it expelled more smoke and at certain times the turbulence was felt more. Everything varied. For the same reason, the ‘Squirrel’ proceeded with patience and was only satisfied when he felt that the volcano, finally, was granting him permission to enter it.

As they positioned the helicopter over the volcano, Sebastian had three things in mind: his suit, the axis (that is, the direction of flight), and speed.

“This was achieved with a lot of training, hard physically and psychologically. I mean, it was inside a crater. There is a moment of the flight where I find myself facing a wall, I could have suffered really bad consequences “Alvarez said, with a slightly nervous laugh.

“The volcano in Mapuche is called Ruka Pillán, that is, the house of the devil. I felt that I was entering hell, but at the same time I wanted to get out of it, ”explained the athlete.

From the helicopter jump to the entrance to the crater, 40 seconds passed. The concentration of the athlete Red Bull it was absolute. There was nothing in his mind other than the calculations to get out of the crater and finish the flight successfully.

“The feeling of entering the devil’s house is one of the most dangerous, strange and terrifying things I have ever experienced. I had to talk to the volcano before to be able to do it, since the volcano does what it wants and if I’m wrong, I’ll stay inside, in hell “, recalled the ‘Ardilla’ Álvarez.

Asked about how he would define this new feat, Sebastián highlighted his team and only managed to exclaim “Wow! Do the impossible basically “.

“We are already studying a next project, I think it will be for the beginning of 2022. This project in Villarrica marks a before and after in my career, I don’t know if I will do something as impressive as what I did. But we will have a surprise ”, concluded the ‘Squirrel’.