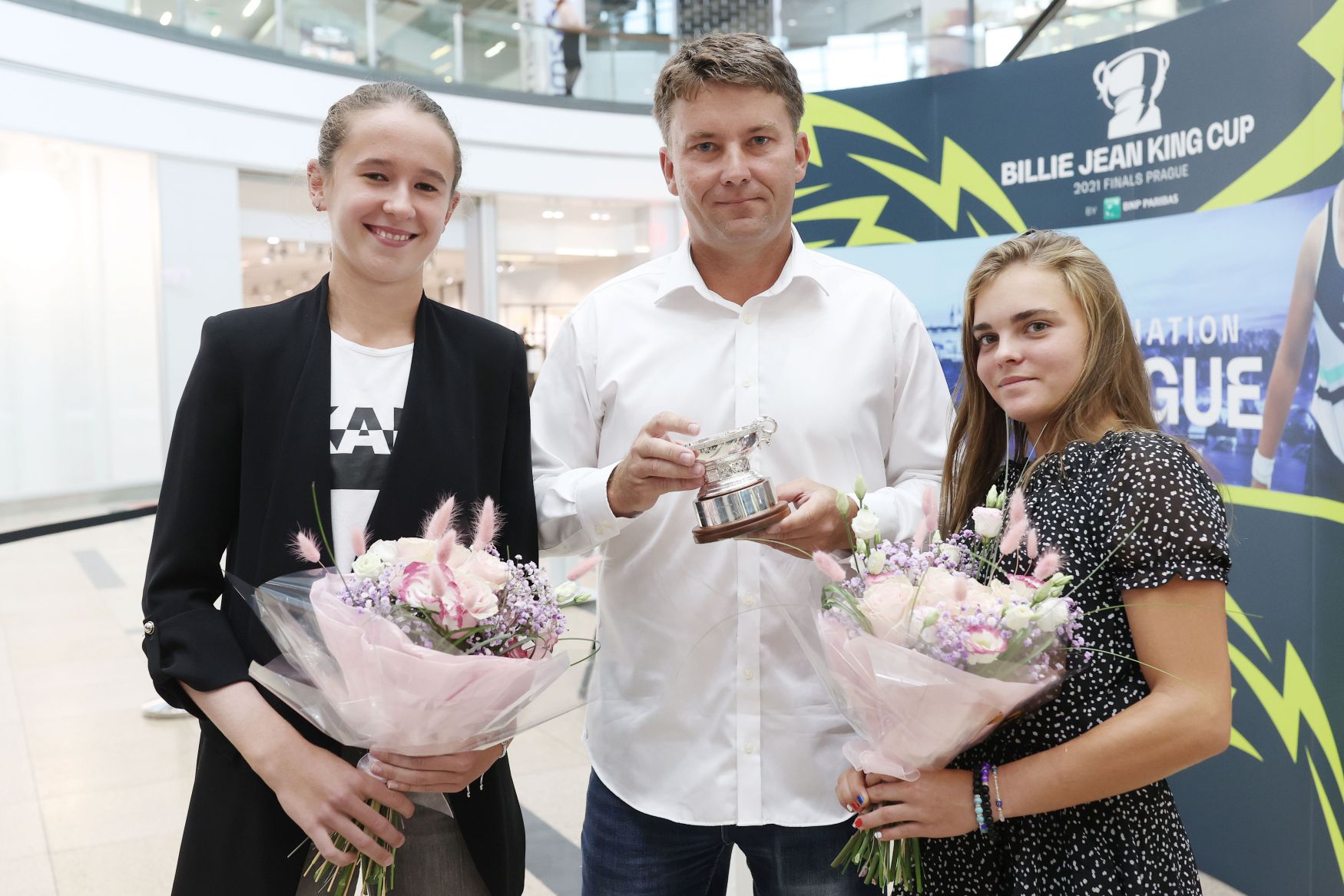 In 1992, he won the singles at Wimbledon juniors. Before him (and after him), only one native of the Czech Republic, Ivan Lendl, managed to do the same. He paid for a huge talent inevitably reaching for the biggest titles. However, David Škoch’s epic tennis career was significantly dampened by fatigue syndrome.

From the position of a former exceptional talent and then an excellent doubles player, he now helps with the development of young Czech female tennis players. He is the non-playing captain of the junior national selections in recent years ruling the tennis world.

In an interview for Aktuálně.cz 45-year-old David Škoch describes why Czech junior women have been dominant in recent years, and he also recalls the feelings he experienced as a young, ambitious athlete when his dreams were shattered years ago due to a recurring illness.

You are the captain of another U16 championship team. From your point of view, is the Czechia really such a junior tennis superpower, as it appears according to the results of recent years?

Lately, it really seems like girls’ junior tennis is pretty much ruling the world. The results are great and the girls have now confirmed again at the European Championships that this is indeed the case.

What is it in? What does Czech tennis have that other much larger and richer countries do not?

We have a lot of good girls overall. And they are still increasing, more and more are being packed. A really broad base has emerged, it’s wave after wave. It’s awesome and I can’t even analyze what it is.

How do you explain that this is the case with girls, but not so much with boys? Is this a systemic problem or is it simply more competition?

A very difficult question. For the boys, there was certainly a slowdown, but the situation is also improving. We see, for example, Jirka Lehečka, who has been talked about for years. The latter confirms the talent and has already settled in the top 100, which is a great achievement. Tomáš Macháč is hampered by injury, but he also belongs there. And I’m sure other guys will follow suit. There are simply too many girls and they pull each other.

Last year, you won the junior Billie Jean King Cup in a team of Brenda Fruhvirtová, Nikola Bartůňková and Sára Bejlek. These are girls who are already trying to establish themselves among adults. How do you see their immediate future?

Sara did the most this year, she already won one “sixty” last year, and this year she confirmed that she had the best footing of the three. We’ll see how they fare.

You modestly said last fall that your function was cosmetic, that the girls play great on their own. Still, I ask, what are the main things you are trying to convey to them?

We want the captains of those selections to have some relevant experience. I was a great junior, then suddenly I had to play only doubles due to injuries. I think I can give them a lot from my position. Why it didn’t work for me, what they should avoid. I try to help them, and so do others.

So what are the risks? There is a lot of talk about how to actually approach, say, child stars, whether hard work and visiting a large number of tournaments is not counterproductive, either in terms of health or psychology. What do you think about it? What is most important to avoid any early burnout?

It’s nice when someone is terribly talented in their youth, but on the other hand, psychological pressure naturally arises on them. It requires having people around you who guide you well, put you back on solid ground, knock you down and drive honestly. Another thing is some injury prevention, and young players who have a lot of load must get on that as soon as possible. It does not want to go to physiotherapists only when something hurts, but continuously and preventively. To keep health especially during the transition from juniors to adults. There, when a longer injury occurs, it is difficult to catch up.

You say that it is necessary to have good people with you, a good environment. With us, in terms of families, clubs, national team coaches, is everything in order in this direction or can something be improved?

I think we have an advantage now. There is an awful lot of ex-players involved in coaching. When I was playing doubles, we had like seventeen doubles players in the top 100. These people are now in their forties and a large part of them are training here in the Czech Republic. The more involved those who have experienced something in tennis and toured those tournaments, the better.

Quite a lot has been and is being written about last year’s set of players. But what about the team that has just won the EC? Tereza Valentová, Lucie Urbanová and Magdaléna Smékalová. How would you describe them?

Tereza is able to beat absolutely everyone in her category, she is our clear number one. Lucka and Majda somehow complement each other. Terka won all her matches and one of the other girls always added a point. We’ll see how it goes. But I believe in that team and we will compete at the World Cup in the first week of November.

Tereza Valentová was the biggest mover, she is the same year as Brenda Fruhvirtová, 2007. Do these girls have what it takes to cover adult tournaments?

I think tennis-wise yes. They just need to gain some experience. When they go to their first tournaments, it definitely takes a while to get the hang of it. Before they touch it a little. Tennis is a little different from junior tennis. But Tereza Valentová could easily play higher adult tournaments for me.

You certainly wish that for everyone, but if you had to name one or two players from those you have gotten to know during the last few years, who has the best chance of making it among the adults, even to the narrow top of the world?

Very hard to answer that. Every girl is different and I think they all have a great chance to get there. Of course, some factors are unpredictable, starting with health and happiness. But if I really had to pick someone, I think that Sára Bejlek could get very high.

What do you admire most about her? What is special about it that sets it apart from the rest?

He can play great matches. Clear match type. He can play those big, crucial balls in matches in important situations. And that, of course, is the key thing.

Let’s go back to your story. You won the junior Wimbledon, you were a great talent, but then health problems took over. What exactly was the problem?

It was a fatigue syndrome that kept coming back. Epstein-Barr virus. I was told that I could only have it once in my life, but then it happened again three years in a row. Every summer I was away for three months. Then came the fatigue fracture of the rib, which also bothered me for several years. This also caused me to lose self-confidence. I hit a couple of results in the doubles, so then I decided relatively quickly to go around the doubles.

How old were you then?

About twenty-two, I think.

Do you know from a distance what it was, if there was an objective cause, overloading the organism or something similar?

No, no, it’s impossible to say if there was a cause. Someone just has it that way. Robin Söderling (Swedish tennis player, two-time French Open finalist from 2009 and 2010, note aut.) actually stopped something similar. Fatigue syndrome caught him and he never got rid of it. I don’t know why it came. Then it went away, but I stayed with doubles.

Was there a lot of pressure on you as a young lad? After all, only Ivan Lendl from the Czech Republic had previously won the Wimbledon junior title. It had to be talked about a lot, everyone had to remind you. It was difficult?

Looking back, the success was huge. I was fifteen and totally excited about it. Shortly afterwards, I won the European Under-16 Championship. Then, at eighteen, the Pardubice junior. The expectations of the surroundings were terribly high and the pressure was on. But it is possible to fight with it, on the other hand, it is much more complicated with the health problems.

How hard was it to deal with the fact that you probably won’t be fighting for the biggest titles? After all, you’ve been working on it since childhood…

I have to say that I didn’t deal with it anymore, it didn’t bother me for a long time. I lost my confidence in the game, but then I found it in doubles. I remember my first doubles result, we were with David Miketa at some tournament, we passed the qualification and then played two rounds. We made quite a bit of money and some points, so I decided on doubles. I didn’t look back much and had a wonderful tennis career in doubles.

There is a significant difference in the financial evaluation of singles and doubles. Making a living wasn’t a problem?

There is a big difference, of course. But if a person is somehow up to the sixtieth place in doubles and goes around the Grand Slams, it’s not bad.

In doubles, you won five tournaments, you were 30th in the world. You didn’t resent tennis even after your career. Was there any other option for you than to devote yourself to tennis again, this time from the coaching position?

I didn’t think about anything else. I immediately followed up naturally. My first mentee was Honza Zedník, with whom I had previously toured tournaments and played doubles with him. Then came a short collaboration with Robin Staňek, then Petr Nouza, I also played with him and at the same time passed on experience to him. So it connected naturally.

Who are you training now?

I work at the Spoje tennis club under Vojta Flégl, and I currently have two wards, Miriam Kolodziejová and Petra Nouza. I have union trips for that.