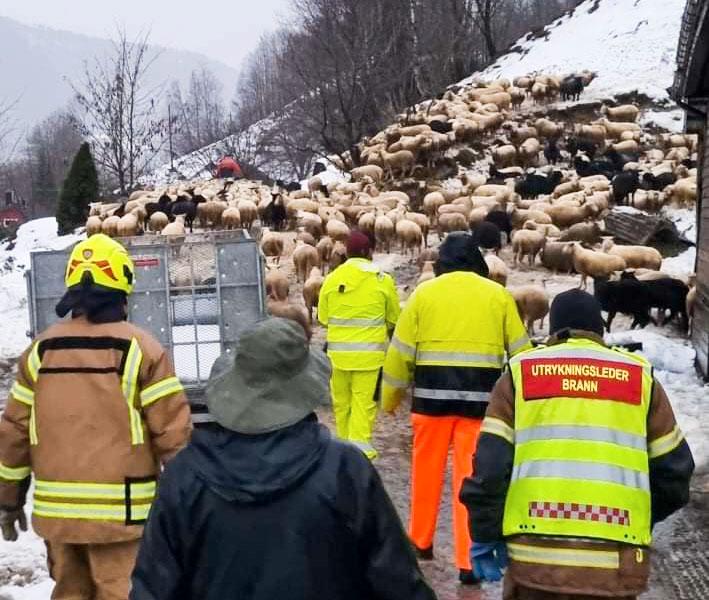 SURNADAL / OSLO (VG) The county road is flooded. This creates trouble for a rescue operation that will evacuate 350 sheep from the extreme weather Gyda.

The children have been sent home from school, the roads have been flooded and the power has gone out in Surnadal. The water level in the river Surna has risen to 3.8 meters – almost four times as high as normal.

And it’s just going to rise through the evening.

Extreme weather Gyda has already led to several minor incidents around the country – and Thursday can be far more intense, warns NVE.

Håvard Krangnes at Vindøla camping confirms to VG that his campsite is under water on Thursday morning.

On Thursday, he himself had to help his parents with a more critical situation on their farm at Svean in Surnadal.

– We have a sheep barn with 350 sheep in it. These are living individuals, and the priority is now. There are only dead things on the campsite. I should have been there too, but there is little we can do, Krangnes said earlier Thursday.

At 16.25 he informs VG that they have rescued the sheep from the barn and placed them with a neighbor on higher ground.

He says that there has been a lot of weather in the area during the extreme weather Gyda.

– It does not seem that it decreases, so the river grows and grows. No sign of improvement, he writes in a text message.

It was Drive who mentioned the case first.

Had to wait for tractor

Fire chief in Surnadal, Tor Arne Moen, confirmed that the fire brigade was on site opposite VG just before 11.00 on Thursday.

– The fire brigade is on site with five people on the farm. The river has stagnated now, there is neither an increase nor a decrease, but they will be out there to assist the farmer if evacuation has to be started.

By the road, VG has observed the fire brigade has been stuck on their way over to the farm, where they have been waiting for a tractor to take over the flooded road.

Tor Arne Moen confirms to VG that the fire brigade was transported across the water by tractor.

– Evacuation has been started a while ago, and the fire brigade is there to help. has been transported by tractor to the barn, says the fire chief.

– The sheep are now led up the hill, and down to a neighboring barn which is about 500 meters further away. They have to go to the hoof, he says.

Farm owners are afraid Surna will rise further. The fire chief says the situation in Surnadal is characterized by “closed roads and relative chaos”.

– The roads are closed on all sides. We are stuck in Surnadal now, says Stine Fiske, who lives in Kvanne, about ten minutes from Surnadal.

– It is extreme with the water coming up the village. Now both roads are closed and there are power outages. The entire Surnadal is submerged, says Fiske

On Thursday, she observed the large bodies of water Gyda has given into the watercourse Søyåa.

She further says that the children are sent home early from school:

– Now we received a message from the schools that they send the kids home at 13.00. It is because the roads are closed, so the buses are not allowed to run, she tells VG.