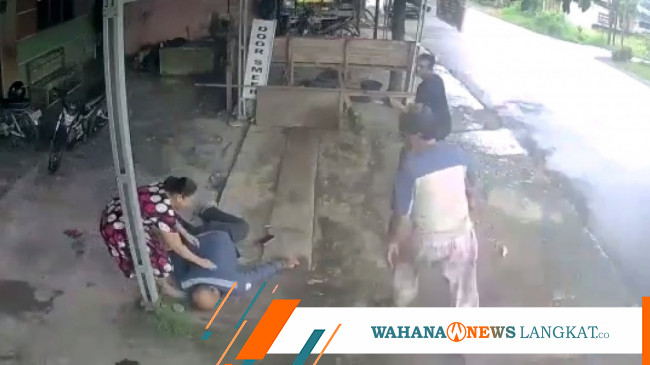 Here’s the story at that time, Fend (47), an HKI Seacion II employee, a resident of Kel. Sidomulyo, Stabat District, came to the house of Eka Maulina, who is a widow with 2 children and is the ex-wife of Indra Mahendra Jalan Ahmad Yani Kp. Kruni Kel. Kwala Bingei.

At around 09.50 WIB, when Fendi and Eka Maulina were chatting at Eka Maulina’s house, suddenly Indra Mahendra came and felt jealous of Fendi, who was considered to be Eka Maulina’s lover, and an argument ensued. And Indra Mahendra took out a knife and stabbed Fendi in the back of the left side of Fendi’s back, Fendi tried to fight back with a 1 M long piece of wood but because too much blood came out Fendi fell down and died on the spot.

Seeing this, Abdul Man Jenggot tried to intervene and arrest Indra Mahendra, but due to fear, Indra Mahendra, driving an SPM Suzuki FU type, fled towards the deadly intersection of Jalan Proklamasi Stabat.

See . Fendi fell down, the parents of Eka Maulina and Salimudin Jenggot and his wife shouted for help from local residents and contacted HKI because . Fendi is an HKI employee.

KKB Papua Rains Bullets on Residents of Badminton, A Trader Killed by Shots

Received a report from the community, the Kapolsek Stabat AKP Ferry Ariadi, SH, MH and his members visited the TKP and sterilized the TKP and took the victim to the hospital. Bayangkara Medan for investigation purposes.

Furthermore, the Stabat Police and Langkat Police are looking for the whereabouts of the perpetrators who have not been found so far. Meanwhile, Fendi’s body will be flown to Madiun, his hometown at the request of the family. (red)

See also  Broadcast: JV, NA and 'Saskaņa' are the three most popular parties three months before the elections