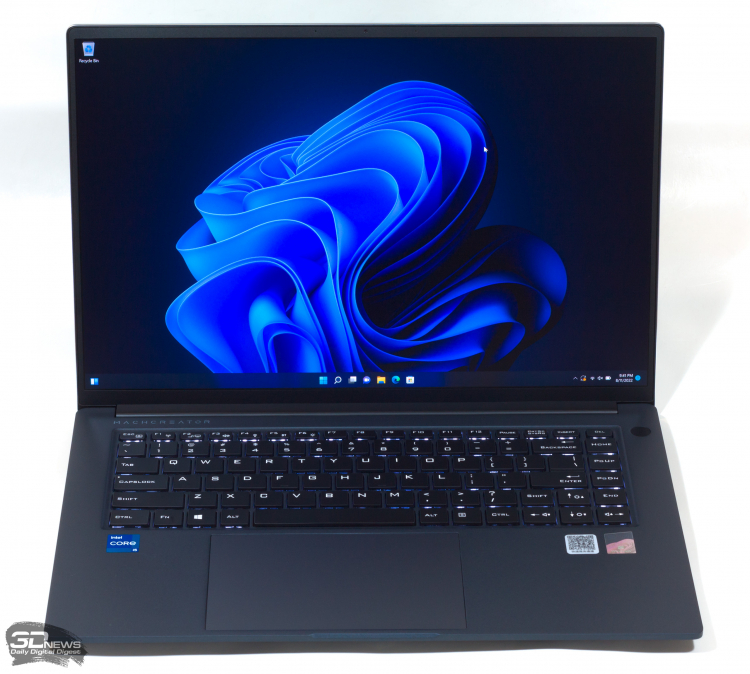 Readers have probably ceased to be outraged by the news that another US-based technology company has decided to leave the Russian market, and the Taiwanese are gradually distancing themselves from us. Not to say that the price lists of computers and components are empty, but for some items the impending shortage is already felt, and many new items were simply inaccessible. Of course, there is hope for parallel imports of “sanctions”, but until it is fully operational, imports from mainland China are much more noticeable, which on the laptop market is no longer limited to the products of two well-known companies with names starting with the Latin letter H. Brands , previously known only to thrifty AliExpress regulars, have now attracted the attention of the general public and even major Russian retailers.

Consider one of these devices − Machenike Machcreator 16. This is a working laptop in the increasingly popular 16-inch form factor, which promises increased performance compared to most ultrabooks, and most importantly, it is sold at a very attractive price.

The creators of the Machenike Machcreator 16 have chosen a central processor that fits the laptop form factor at the junction between compact ultrabooks and powerful, mostly stationary workstations – a quad-core Intel chip Core i5-11320H. As part of the 11th generation of Core, it belongs to the intermediate category H35 between six- and eight-core solutions on the one hand and low-wattage ultrabook CPUs on the other. It is distinguished from the latter by an increased power reserve from 28 to 35 W.

In theory, the dimensions of Machcreator 16 allow the use of even six- and eight-core Intel processors, but then a discrete GPU would have to be added, because the integrated graphics of the top series of 11th generation mobile chips are several times weaker than that of the Core i5-11320H, which contains 96 execution units of the Intel Xe video core.

The amount of RAM is, depending on the configuration of the laptop, 8 or 16 GB of DDR4 type, and the solid state drive can hold 512 GB of data.

See also  The government against Gamers and Technological Progress

Products under the Machenike brand are not yet represented in Russian retail stores, but they are already offered on the Avito, Ozone and, of course, AliExpress marketplaces, where you can buy Machcreator 16 for a little over 63 thousand rubles. directly from the manufacturer. This, as you understand, is a very modest price for a laptop on an Intel platform with similar characteristics.

Despite the large screen size, other design features of the Machenike Machcreator 16 make it look like a typical ultrabook. The device is assembled in a thin metal case, which entails predictable advantages and disadvantages. So, the weight of the laptop is a little more than 1.65 kg, but the panel around the keyboard and the screen cover are easy to bend or bend. The design of the Machcreator 16 captivates with absolute minimalism: the only decorative element here is a barely visible logo on the lid, and everything else is painted in deep black. By the way, the topcase has a rougher, rougher anodization than the lid: whether this is done intentionally or not, the result is that the surface perfectly resists the appearance of oily fingerprints. On smooth dark metal, as any user of such devices knows, prints appear instantly.

The screen cover can be lifted with one hand (although not without difficulty: at a certain point, the hinges begin to resist), and it leans back 180 ° from the keyboard. The screen itself is matte, surrounded by very thin bezels, has a decent resolution of 2560 × 1600 and aspect ratio of 16:10, and most importantly, it is a matrix with a refresh rate of 120 Hz, which is still rare for work laptops.

Although many manufacturers of large-format laptops equip them with a keyboard with a numeric keypad, the creators of the Machcreator 16 decided not to do this (there is only a column of additional keys on the right). But the keys turned out to be very large and it was not necessary to limit any of them in width (including “~”). The key mechanisms have an unusually long stroke and a clear actuation moment, but there is also a drawback: with such a long stroke, the covers should be better stabilized in the plane. In addition, the base under the keyboard feels lacking in rigidity, and it drums rather loudly when typing. The backlighting of the keys is white, two-stage. The keyboard is made in the American layout, but the characters are prudently shifted to the corner of the covers to leave room for engraving.

The power button is separated from the rest of the keys and looks like it has a biometric sensor integrated into it. But not in a laptop for that kind of money, right? However, this is indeed a power button with a fingerprint scanner!

The touchpad on the Machcreator 16 is just huge, but from the first seconds of operation it becomes clear why other manufacturers tend to avoid such large panels. The fact is that with such dimensions it is difficult to make sure that the touchpad does not hang out in the case and is squeezed along the entire length to a more or less the same depth. Here, the touchpad is simply rigidly fixed in the center, and only the front corners are pressed. This is unfamiliar and uncomfortable for those who use a physical click, but those who prefer a short hit on the touchpad will appreciate the panel’s stability. It is also worth noting that the touchpad surface is quite rough. Attributing this to advantages or disadvantages is also a matter of individual habits, but here we also note the positive effect of protection against greasy traces.

A set of external interfaces, typical for a modern ultrabook, includes a USB Type-C port, a pair of USB Type-A (all running at 3.1 Gen 1), full-sized HDMI and a mini-jack for connecting audio devices. But there is something else – the Thunderbolt 4 connector. And this, again, at the anti-crisis price of Machcreator 16!

The laptop battery is charged from an ordinary “brick” with a power of 90 W with a cylindrical plug. With two USB Type-C connectors, this is not an elegant, but practical solution, because otherwise one port would have to be sacrificed for power.

Opening the laptop also brought some pleasant surprises. First, it turned out that the aluminum chassis panels here are not as thin as those of laptops from other manufacturers. We only note that the screw holes are drilled directly into the topcase supports without brass inserts, so you will have to tighten the screws more carefully after preventive cleaning or replacing laptop components. The CPU cooling system consists of two turbines with two heat pipes, although many Machcreator 16 counterparts are content with a single cooler. But the VRM of a rather powerful processor, unfortunately, does not have any active cooling.

RAM is represented by two DDR4 modules, which means it can be easily upgraded. And the SSD, when 512 GB of volume is no longer enough, is not necessary to change, because the motherboard has a second M.2 connector. In offline mode, the laptop is powered by a large 70 Wh battery.

If you notice an error, select it with the mouse and press CTRL+ENTER.