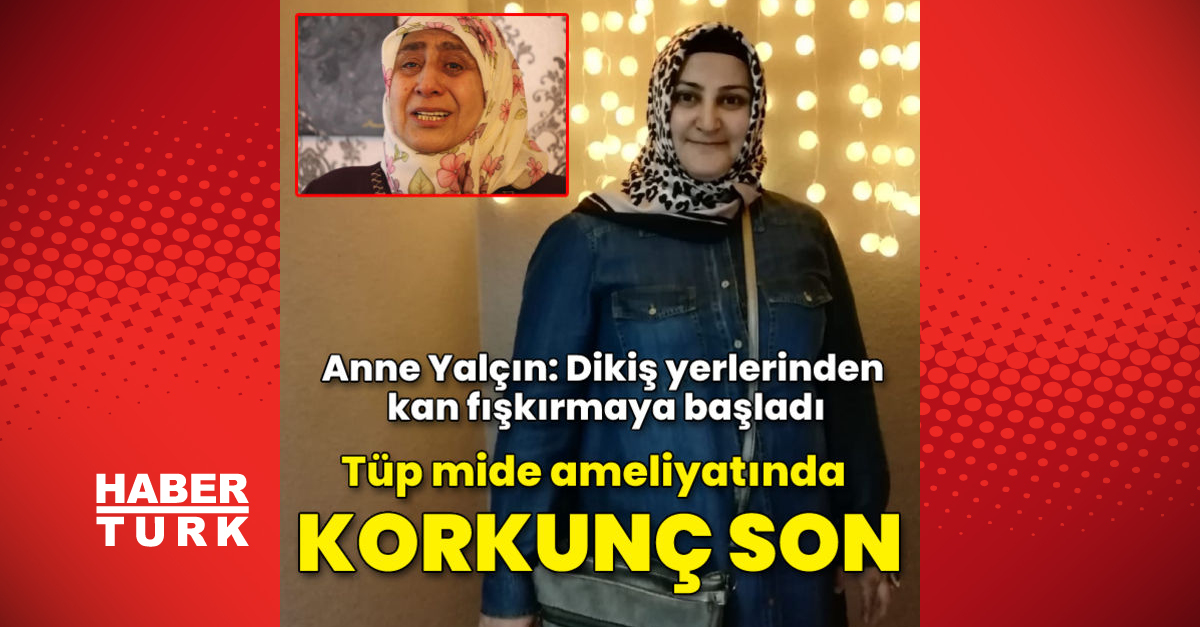 Tuba Yalçın, who works as an audiometry secretary at Ankara Training and Research Hospital, decided to have stomach surgery to get rid of her excess weight.

Tuba Yalçın, who is 112 kilos, is a faculty member of the general surgery department of Gazi University Faculty of Medicine. Dr. He said that he wanted to have surgery by making an appointment with the EU. Dr. Tuba Yalçın on 5 August after her examinations. Gastric sleeve surgery was performed by AB. Tuba Yalçın, who was discharged two days after her surgery, started to complain of pain, fever and diarrhea. Yalçın went to the doctor and explained the situation. Returning home again, Tuba Yalçın lost her life in the hospital she was taken to on August 15, when she fell ill again.

Mother Türkan Yalçın said that her daughter wanted to have an operation because she couldn’t lose weight with diet last year on Eid al-Adha. Mother Yalçın stated that her daughter had tests done at the hospital where she worked and showed these tests to the doctor who performed the surgery at Gazi University, A.B., and that her daughter was taken into surgery according to these tests. Mother Yalçın stated that her daughter had an operation at the university hospital and said, “After the surgery, my daughter started to cry, saying, ‘Mom, I’m burning, a stone has settled in my stomach.’ I explained the situation to the nurses and assistants. They said, ‘Aunt is normal.’ He said: “It burns. I told the doctors again. They said, ‘It’s normal, it’s okay’. Then they hospitalized us for a bit and discharged us.”

‘THE ORGANS DUE TO INFECTION’

Mother Yalçın said that the bleeding continued even after her daughter’s stitches were removed, and she said in tears: “My daughter said that bloody water came from where the stitches were, we went to the hospital where she worked, we were examined. When the doctor checked her abdomen with her fingers, blood started gushing from the seams. She told us that she had an infection. They told us to take him to the place where he had surgery and have him treated. We went to Gazi Hospital and explained the situation, they said, ‘There is no infection, the wound is clean.’ He said, ‘I’m relieved, but his fever came out in the evening. We called the ambulance, they checked his blood pressure and temperature, they said ‘everything is normal’. He started walking around the house with pain in the morning. When his condition worsened, I immediately called a taxi. On the way to the hospital, his feet started to go unsteady, his lips turned purple, I sat down. something happened,” he said, and suddenly his heart stopped. They did CPR, took them to the intensive care unit, and said, ‘Why didn’t you bring them beforehand?’ Due to the infection, his organs failed, he died there.”

Mehtap Kaya, the family’s lawyer, said that they filed a criminal complaint with the Ankara Chief Public Prosecutor’s Office on charges of “causing death by negligence”, “neglect of duty” and “abuse of duty”, claiming that the doctor who performed the surgery and the hospital staff were negligent. Kaya said, “The investigation is continuing. We are waiting for the forensic reports. We are following the legal process to punish the criminals in the most severe way.”

Gazi University Medical Faculty Hospital did not make a statement on the subject.