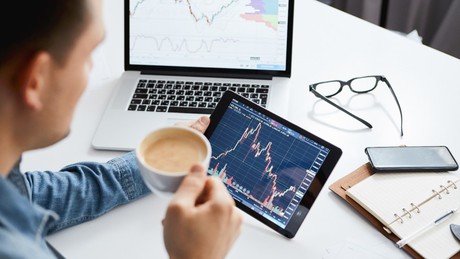 The CNV is studying a Matba-Rofex project to offer futures markets, which would open the door for trading instruments based on cryptocurrencies

After six months of uncertainty, in which it fell 50% with its peak in April, Bitcoin hit a new all-time high in October and floats back to the $ 60,000 range.

According to experts, much of the escalation took place because of a geopolitical shift in its control. That is, in the reaction of the two powers to the digital currency:

Strictly speaking, An ETF is a set of assets that is listed on the Stock Exchange and pursues two objectives: exposure to a sector and, at the same time, diversification. While it seems like a contradiction, the iShares ETF marketed by the investment bank Blackrock :

In the case of ETF ProShares y Valkyrie, recently approved by the US Securities Commission (SEC), what they do is invest in Bitcoin futures contracts to bet on the rise (or fall) of the price of the cryptocurrency.

In these latitudes, there is already a critical instrument that is being analyzed by the National Securities Commission and it would allow these instruments to be operated in pesos.

In Argentina, Matba-Rofex advances so that investors can maintain a position in Bitcoin without having to buy the cryptocurrency and following the standards of a regulated market.

As a first step, Ismael Caram, Deputy General Manager of the Financial Market of Matba-Rofex, reveals the iProUP : “A stock index was created, after several clients asked for Bitcoin futures“.

Futures contracts are nothing new – although the crypto variant- and they work as follows:

In Matba-Rofex You can already trade with futures contracts of different commodities (soybeans, wheat, corn, etc.) or fiat currencies (dollar, euro, yuan), but sets the stage for creating the first local Bitcoin-based instrument.

“We were working for four months and signed an agreement of 12 price taking points, that is, exchanges like SatoshiTango, Let’sBit, Ripio, among others “, says the executive.

In this way, it shows minute by minute “the price, the average liquidity and the width of the spread“. That is, the difference between the buying and selling tips, such that a”photo of the entire bitcoin supply in the local market “.

According to Caram, This index complies with all the guidelines of the International Organization of Securities Commissions (IOSCO), which establishes the good practices of a regulated market.

After several tests, the company created a application programming interface (API). That is, a connector that allows link your system with that of third parties (as an app), so that you “lift” that data in real time.

Caram ensures that the creation of an index was intended to build a tool that allows pricear (price) the asset in local currency. “We list futures in dollars, but grains such as soybeans, corn or wheat are settled in pesos to the official. With bitcoin, if we list it in foreign currency, we have to settle it to the official“, says the executive.

Thus, they avoid the disparities of this market, since Bitcoin has been measured in different ways at the local level.

Once the index is done, the next step of Matba-Rofex is creating the market for the Bitcoin futures contract, once the CNV gives the OK to allow your trading.

According to Caram, this new crypto instrument “It will be operated through a clearing and settlement agent “(Alyc), that is, a broker or an online investment platform which are also registered under that title with the CNV. Then, the executive continues, “a registration fee is paid” and the contract is bought or sold.

Once operated, the executive affirms that the investor will be able to do whatever he wants, from “having the physical position of the asset (bitcoin) and selling it in the future“, which is known as” coverage “; to “arbirtrar it in other markets, for example, against bonds”.

“We see it as an ideal instrument for corporate and institutional investors. As it will be a fully regulated product, you can enter the capture of an investment fund. It is a ‘live position’ that changes all the time, recommended for qualified investors “, anticipates the executive.

Another variant is the possibility to create an exchange-traded fund or ETFSo fashionable these hours on Wall Street for those who want to expose themselves to a sector and, at the same time, diversify the bet in several companies. However, that will no longer depend on Matba-Rofex.

“We have several roles and one of them is market maker: we list options. But we won’t provide an ETF, that’s what banks do. We set the rules for trading futures and other companies will be in charge of providing the exchange-traded fund, “remarks Caram.

In this market, the same exchanges could “participate as liquidity providers”, while the mutual funds, an instrument that Mercado Pago and Ualá made more “massive”, you could “try to find a portion of your portfolio in Bitcoin.”

Although its focus is traditional markets, Matba-Rofex also achieves “exposure” in crypto and fintech sectors through its Primary Ventures risk fund.

“We contribute to the Belo wallet and the Let’sbit exchange. We try to add value beyond money“, says Caram, who adds that they also brought capital closer to the agtech Inteliagro, which applies technology to increase agricultural production; and the fintech VoiceTrade, specialized in the management of electronic invoices.

In addition, the firm accompanied the development of Agrotoken, which launched SOJA, a digital currency which trades alongside the legume and allowed the world’s first 100% crypto transaction of this commodity.

“We work in our laboratory several proofs of concept crypto“, enthuses Caram, who entrusts some examples:

“We are tokenizing to see what we can do with these innovations“, indicates Caram, who points out that they can already act as” oracles “in smart contracts, as the sources of reliable information on the basis of which these automated instruments make decisions are called. In the case of Matba-Rofex, quotes in real time.

For this market revolution to take hold in Argentina, all that remains is the approval of the CNV. The executive ensures that even without the “Crypto Law”, whose project would be presented again with improvements in the coming weeks in Deputies, the entity could approve it.

It will be then that Argentina joins the crypto EFT craze that pushed the leading currency so much. And another tab opens in the catalog of investments 4.0.