Huawei is preparing to launch a new version of its Huawei P30 Pro in Germany, under the name of P30 Pro New Edition. A way for the manufacturer to continue to offer a high-end smartphone equipped with Google services.

A year ago, Huawei launched its P30 and P30 Pro, two smartphones particularly welcomed at their launch. They had good performance, excellent battery life, and some of the best cameras on the market. Since then, the Chinese group has paid the price for the economic conflict between China and the United States and can no longer offer new smartphones with Google mobile services.

It is in this context that the manufacturer would prepare to launch in the coming weeks a reissue of its Huawei P30 Pro. Called “Huawei P30 Pro New Edition”, it should be released in Germany by May 15, as indicated by the conditions of use of a promotion implemented across the Rhine between Huawei and Vodafone: “The promotional period for the P30 Pro NEW EDITION will take place from May 15, 2020 to June 4, 2020”.

It is not known, however, what changes will be made to the Huawei P30 Pro as part of this reissue. Remember that the manufacturer cannot completely change all elements of the device, otherwise it would no longer be certified by Google. We can thus imagine an evolution of storage or memory, as well as a slightly different aspect. However, it seems very unlikely that Huawei will have the latest processor, the Kirin 990, or new cameras.

A second reissue after that of September 2019

It is not the first time that Huawei has decided to reissue its P30 Pro. The Chinese manufacturer had already played a similar card last September, at the IFA in Berlin. It was on this occasion, almost 6 months after the launch of its P30 and P30 Pro, that Huawei had unveiled the versions “Mystic blue” and “Misty lavender” from his smartphone. At the time, the only changes made were aesthetic, with part of the back in frosted glass. It is also with these models that Huawei launched EMUI 10 on its smartphones.

We will have to wait a few days before discovering the New Edition version of the Huawei P30 Pro. For the moment, it is not yet known whether it will only be launched in Germany or whether France will also be affected. 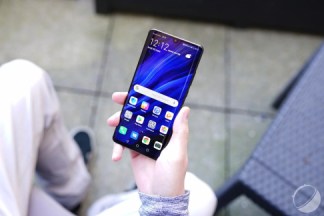 Technical sheet This test was carried out using a smartphone loaned by the brand. Our video test [ytpub:nuXMQpYBniA] Design The Huawei P30 Pro has a small familiar side, and a small innovative side. The first time you take …
Read more