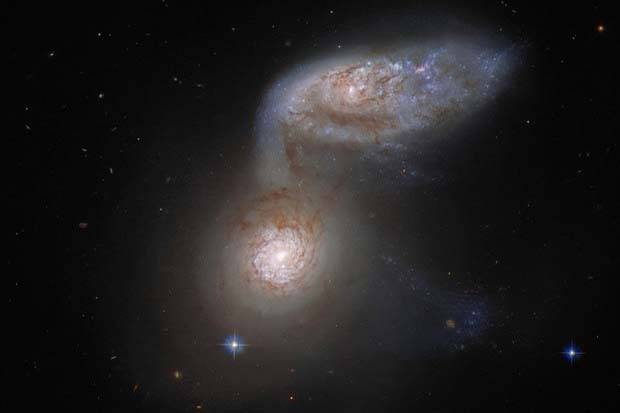 FLORIDA – Hubble Space Telescope recording an image of two galaxies colliding due to the gravitational attraction of the two galaxy the. These two galaxies in one billion years will become one, so it is not yet known how the new galaxy will form.

“These are two galaxies having a bad day. Their gravity attracts each other. So my guess is that this is a kind of mutual attraction,” said Prof Chris Lintott, an astronomer from the University of Oxford, quoted from sciencefocus, Saturday (11/13/2021).

The two spiral-shaped galaxies that have almost the same size are named NGC 5953 and 5954. So these two galaxies have the same strong attraction and when they collide the stars in the two galaxies will separate. (Read also; Scientists Find Evidence of Planets Outside the Milky Way )

These two galaxies are collectively called Arp 91, because they are listed in Halton Arp’s 1966 Atlas of Strange Galaxies. This particular photo was taken by a group led by Julianne Dalcanton, who aimed to photograph many of these strange galaxies.

The final stage of the collision will occur when the black holes of the two galaxies merge. “You can see the material from 5954 is twisted and distorted by the gravitational pull of its neighbors (5953),” said Cris Lintott. (Read also; The First Planet Outside the Milky Way Galaxy With The Size Of Saturn Found )

He said collisions between smaller galaxies in the Universe are common. After the collision event the two galaxies will form a nice large elliptical galaxy. “However, merging (collision of galaxies) of this magnitude is once in a lifetime,” said Lintott.