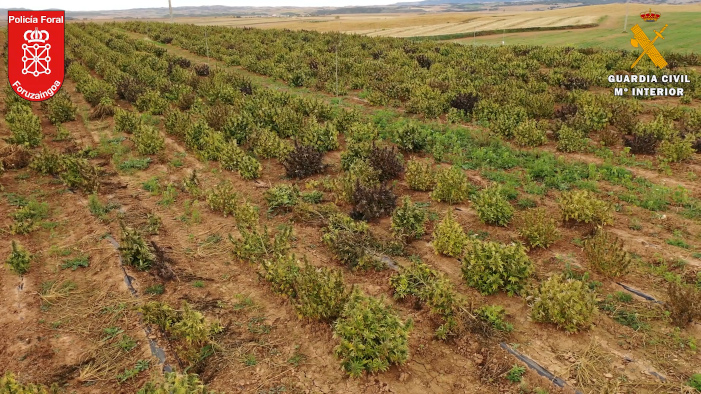 An enormous area of ​​agricultural land with cannabis plants has been discovered in Spain. The plantation, on the open ground, is located in the province of Navarra in northwestern Spain. In total, 415,000 plants were destroyed that could have been sold for 30 million euros for processing into hash oil (CBD). The Spanish Guardia Civil estimates that after processing, the harvests could have been worth 100 million euros. CBD is oil without the THC that gets people stoned, but is still illegal in Spain.

The investigation began in the middle of last year when an agent discovered a large cannabis plantation. Police services in the cities of Artajona and Olite set to work and discovered an area of ​​67 hectares in the countryside. The person in charge of the cultivation informed the agents that the destination was the use of hemp for industrial use, for example to make packaging material.

The suspects had set up a large industrial warehouse in the city of Artajona, which was equipped with a ventilation and temperature system for drying the plants.

The investment the man had made, as well as the final destination of these plants to countries such as Switzerland or Italy, which are known for processing plants for the production of CBD-derived products, made him suspicious. When, in the course of the investigation, it turned out that a truck loaded with dried weed was going to leave for Italy, that load was confiscated.

The rest of the plants that had not yet been collected were cut down and destroyed.

Three people have been arrested.