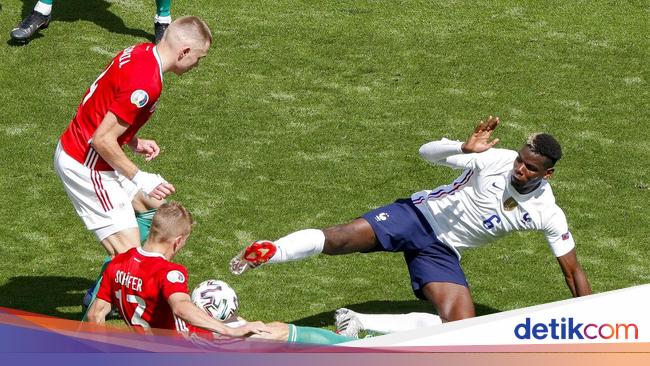 French National Team failed to get full points in the second party Euro 2020 against Hungary. Had left, Les Bleus had to settle for a 1-1 draw.

In the Group F match which was held at the Puskas stadium, Saturday (19/6/2021) night WIB, Hungary was more defensive by only making five attempts, three of which were on goal.

That one shot led to Attila Fiola’s goal in first-half injury time. France, who made 15 attempts, was only able to make one equalizer through Antoine Griezmann in the second half.

The course of the match Hungary Vs France

In this second match, France made one change in the left-back position. Lucas Hernandez was replaced by Lucas Digne to sharpen the attack.

Sure enough, Hungary was under pressure from France from the first minute and struggled to develop the game. The French attacking trio of Kylian Mbappe, Antoine Griezmann, and Karim Benzema are relied on.

France can only get its first golden opportunity in the 14th minute. Getting a pass from Kylian Mbappe, Benzema immediately kicked the ball to the far post which Peter Gulasci could ward off.

Griezmann grabbed the ball but it was blocked by Gulasci before being thrown out by Hungarian defender Willy Orban.

Three minutes later, France attacked again. This time from the left side through Digne who received feedback from Benzema and immediately released a cross which was greeted by Mbappe’s header, but went wide.

France got a chance to score again in the 31st minute. Paul Pogba delivered a through ball to Mbappe and only to face Gulasci he circled him.

However, Mbappe chose to send the ball to Benzema who was about to release a volley. Unfortunately, the ball hit the ankle instead of Benzema’s foot so it flew over the bar.

Hungary, who was more under pressure, made a surprise at the end of the first half when they were able to lead 1-0. Beginning with an imperfect clearance from Benjamin Pavard, the ball fell at the feet of Roland Sallai.

Sallai immediately passed it to Attila Fiola who immediately ran into the French penalty box and beat Hugo Lloris at the near post.

Left behind 0-1 in the first half, France immediately pushed the Hungarian defense but again they struggled to create chances.

Ousmane Dembele was added to replace Adrien Rabiot in order to increase the pounding power. Dembele immediately troubled the Hungarian defense through acceleration. Beating two opposing players in the 59th minute, Dembele was able to shoot the ball into the corner, but still hit the post.

Griezmann! France’s awaited goal finally arrived in the 66th minute. Mbappe stabbed from the right and was able to release a pull pass, even though it was closely guarded by Loic Nego.

Willy Orban couldn’t drive the ball perfectly before Griezmann leaked it from close range to make the score 1-1.

Three minutes later, Mbappe got the ball from Griezmann’s pass from a free-kick even though his shot was wide.

France continued to pound the Hungarian defense in search of the winning goal. In the 82nd minute, Olivier Giroud pushed the ball to Mbappe who shot straight at the goal, but was denied by Gulasci.

No more goals are created until the game Hungary vs France finished with a score of 1-1.