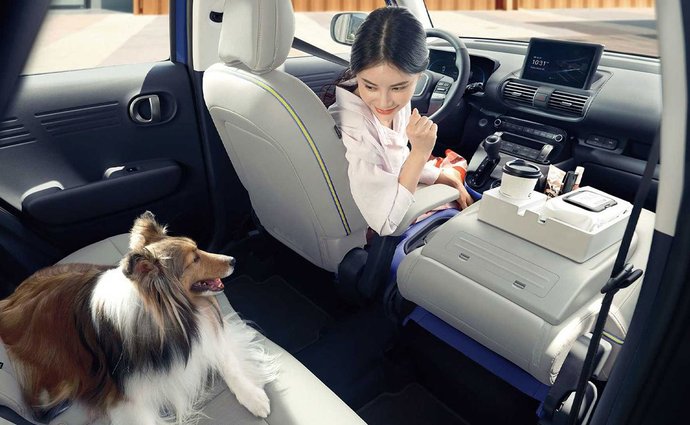 There is also the possibility to fold down the backrests of all seats and create a small camper from Casper.

When it comes to the most affordable SUV, Hyundai offers several options. Overseas, it is the Venue model, in Europe the Bayon model and in South Korea the recently introduced Casper. It was originally speculated that he could arrive in Europe, but this information was not confirmed in the end and Casper will probably remain only a South Korean affair. But it’s a shame.

Compared to the previously mentioned Hyundai SUV, the Casper is significantly smaller and will probably be cheaper. After all, it measures only 3,595 mm in length, 1,595 mm in length, 1,575 mm in height and the wheelbase has a value of only 2.4 meters. Nevertheless, this city squirt with an adventurous look offers a huge amount of variability.

For example, Casper allows not only the rear seat backrests to be folded into the plane, but also both front seat backrests, allowing the crew to turn their cab into one of the smallest “caravans” on the market. In addition, there is a small platform on the back of the front passenger seat that can serve as a practical table for the driver on the road.

The seats in the second row are probably divided 50:50, ie including the seat, and allow a displacement of up to 160 mm. The backrests can not only be folded down, but can also be positioned backwards by up to 39 degrees.

When the seats are folded in both rows, it is said that it is possible to load objects up to 2,059 millimeters long into Casper, and the luggage compartment then has a maximum volume of up to 301 liters when the bench is pushed all the way forward, which is definitely not in vain for a 3.6 meter long car.

See also  The US economy is still far from full employment

In addition, the small cab promises a high level of safety. Casper offers up to seven airbags and, depending on equipment, a wide range of safety assistance systems. There is also a lane-keeping system, a front-wheel drive assistant, a high beam switching system and adaptive cruise control.

An interesting element of the cockpit is the absence of a central tunnel, which is missing due to maximum space. Instead, Casper has a bench on the front, with a drink holder integrated into the center, and a simple armrest. The gearbox selector was then placed by the carmaker in the elongated central part of the dashboard, following the example of the MPV.