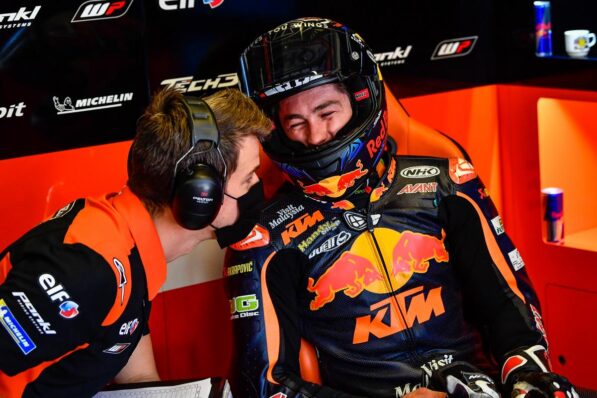 Remy Gardner is preparing to face the last four races of his Moto2 career, which started in 2016. He will be in MotoGP at Tech3 KTM Factory Racing next year, at the end of a 2021 season of which he is for the moment. the boss in his category. But before officially taking the plunge, he got a taste of what to expect this week at the Misano circuit.

The Australian took advantage of a MotoGP test held there, and an invitation from KTM, to climb onto the KTM RC16. And as for his teammate Raul Fernandez, the word ” unbelievable “ came to him when it came to recounting his day. “Logically I expected this power and these brakes, but you don’t understand it until you try it. It was incredible. I shifted gears as if tomorrow didn’t exist, it’s crazy how fast it goes. “

First day in MotoGP, but also first crash for Remy Gardner. A fall “A little stupid, he explained. I had a new rear tire, I arrived with the wheel a little raised, and in turn 10 I went off course. I was going faster than with the Moto2, and while braking I started to widen and I fell into the dirty part. A small and silly fall, the first ”.

Difficult, in 47 laps, to clearly define the prototype. The world leader Moto2 takes this experience as a bonus for the future. “It’s good to try the bike and understand how it’s going. I didn’t do a lot of laps either, it was just about understanding her and feeling her power. It was kind of a gift from KTM. “

“An easy bike, I enjoyed it like a child”: Raul Fernandez on the descent of the KTM RC16