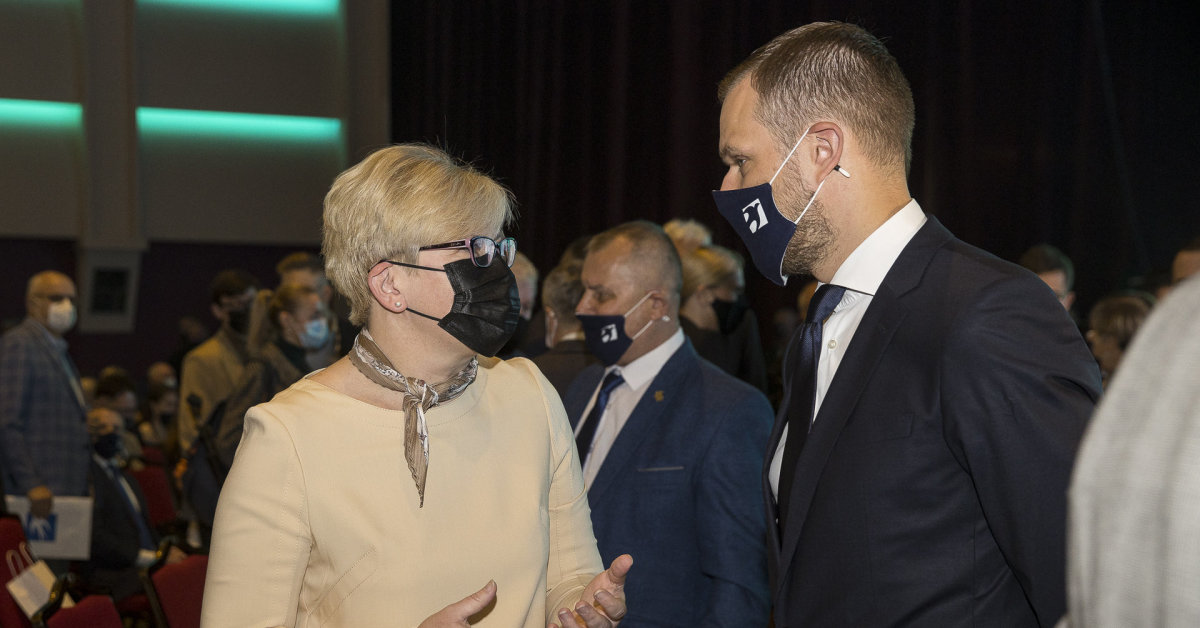 I. Šimonytė is not a member of TS-LKD and every time she is asked about joining the party, she emphasizes that it is a matter of personal self-determination.

On Sunday, journalists were asked about Saulius Skvernelis’ speeches that it was time to reload this government by changing several ministers.

“If I saw a case or if a minister saw a case to change jobs, those changes would be made. Now this is Mr. S. Skvernel’s opinion – who can be angry with him for that opinion, “she said.

It receives not only support but also criticism

Asked if he felt the support of the whole TS-LKD for his government, I. Šimonytė emphasized that it is never the case that there is support from everyone: but just so says. It is known that there are all kinds of opinions all the time, and there are enough criticisms from the party members and colleagues as well, but it seems to me that the Government is best able to check such things in the Seimas during the voting. “

She added that so far there was no vote or decision of the Government that would be submitted to the Seimas and would not have received support.

“Maybe there are people who, like a frequent citizen, think that somehow the issues are resolved without resolving them too much, how often the opposition says in its criticism – everything needs to be done differently, and when the issue is different, it is the first step – cancel everything “What you have done and what to do next, well, there is already less specificity,” she emphasized.

The issue of partnership needs to be resolved

Aušrinė Armonaitė, the Chairwoman of the Freedom Party, who participated in the TS-LKD Congress, assured that the Law on Partnership would be in Lithuania.

“The only question is whether it will happen sooner or later. Let’s do everything we can to make it happen sooner, “she said.

Commenting on this, the Prime Minister stressed that this is not a matter of the Government’s program, it has become a key issue for politicians who have no other agenda, so it is important for moderate politicians to find a consensus on this issue.

Without resolving it, according to the prime minister, the rulers “only have people who have nothing more to say in politics than to fight a holy war no matter what – against three letters in personal names, against same-sex partnerships or something else.”

The Prime Minister reminded that her personal opinion has long been known to everyone – she has supported, supports and will support this decision.

“But we will see whether he will receive support in the Seimas for adoption,” she stressed.

“You have to prove the obvious”

At the congress, I. Šimonytė told the Conservatives that this Government had to face a very uncomfortable reality dictated by a pandemic.

“Vaccines are available to everyone, and often even delivered. I would like to be glad that, compared to other countries, the result of vaccination in Lithuania is relatively good, but I can’t, because every life that a fighter has lost is one death too much, ”she said.

I. Šimonytė emphasized that she had said and would say that she would do everything to fight for people’s lives, their security and future – even if it required unpopular solutions.

According to the Prime Minister, we are involved in the race against the coronavirus, so every person completely vaccinated is a very important participant in this fight.

“Therefore, I would like to sincerely thank everyone who understands this, who trusts science, medicine, the state, the pope, the many authorities and institutions that call for vaccination,” she said.

She said she wanted to thank and wish the patience of the medics, who have to work in difficult conditions again. The politician urged that every effort be made not to further restrict scheduled services or cause moral dilemmas for doctors to give a seriously ill person medical care first.

I would be much happier if I could do without restrictions

“I would be much happier if we could do without restrictions,” she explained.

Freedom becomes a claim to selfishness

According to I. Šimonytė, it is ironic that people who do not agree to compare themselves to those countries on other issues are constantly forced to look at the Scandinavian countries.

“Unfortunately, quite often in Lithuania, the alleged freedom becomes a claim to selfishness, not an opportunity for a respectful and dignified life in a responsible community. “What is recommended is often perceived as simply not important, although the biggest influence on the spread of the virus is the behavior of the people themselves,” she said, emphasizing that the highest price is paid by the person himself.

See also  The governor asks Jenniffer González to urge the federal Treasury to approve a $ 1,200 disbursement

The TS-LKD program, she said, emphasizes that politics must protect human freedom and ensure that everyone assumes their responsibilities.

“Every person’s freedom in society depends on and is limited by the freedom of others (…) Unfortunately, obvious things today have to be proved by fighters for the freedom to die and still kill others along the way,” she said.

According to her, it is not easy to predict how a pandemic will develop.