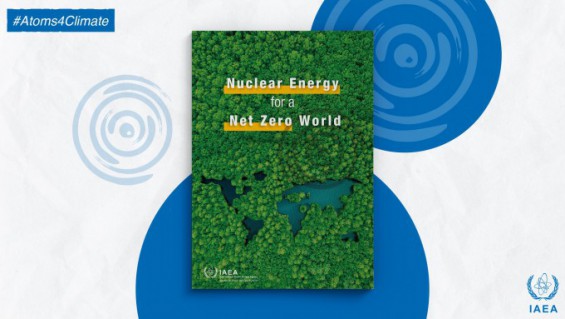 Ahead of the 26th United Nations Conference of the Parties (COP26) to be held in Glasgow, UK, starting on the 31st of this month, the International Atomic Energy Agency (IAEA) released a report that nuclear power plays an essential role in carbon neutrality. Nine countries, including the United States, China and France, have supported the IAEA report.

The IAEA released a report on ‘Nuclear Energy for a Net Zero World’ on the 15th, stating that nuclear power plays an important role in carbon neutrality, serving as a base power to replace coal and fossil fuels and enabling further deployment of renewable energy. released on the 15th. The report also included statements of support from nine countries: the United States, China, Japan, Canada, Finland, France, Poland, Russia and the United Kingdom.

In the foreword to the report, IAEA Secretary-General Rafael Grossi introduced, “In the past 50 years, nuclear energy has reduced cumulative carbon dioxide emissions by 70 gigatons (Gt) and is reducing carbon dioxide emissions by more than 1 Gt annually.” “Now is the time to make evidence-based decisions and increase investment in nuclear energy,” he said.

The IAEA introduced that nuclear power generation provides safety to renewable energy, where the amount of power generation fluctuates due to environmental factors such as weather. “Nuclear plants are critical to achieving our goal of zero greenhouse gas emissions by ensuring a 24/7 energy supply that gives grid resilience and promotes the integration of variable renewables,” the report said. explained that Based on the IAEA’s reactor information system data, he introduced that risk mitigation studies are being conducted stating that although the frequency of weather-related blackouts at nuclear power plants has increased over the past 30 years, power loss has decreased in the last 10 years.

“Nuclear power provides heat and hydrogen to decarbonize areas where carbon reduction is difficult, such as industry and transportation,” the report said. Another analysis added that Korea can produce heat, electricity, and hydrogen by using a ‘hot gas furnace’, one of the nuclear power plants being developed together with the United States. The high-temperature gas reactor uses helium as a coolant and graphite as a moderator to produce heat at 750 degrees.

These are the countries that use the LWR suggested by the IAEA for hydrogen production. IAEA report capture

“Nuclear power accounts for 10% of global electricity production and is already providing 800,000 jobs,” the report said, emphasizing that it could also play a role in economic growth. According to the International Monetary Fund (IMF) estimates, investment in nuclear energy has a greater economic impact than other forms of energy investment and is the most effective measure for a sustainable economic recovery and transition to a resilient zero-energy system.

“Cooperation between renewable energy and nuclear power will be key to achieving zero carbon emissions,” the report said. It helps to lower the

“Limiting global average temperature rise to 1.5 degrees Celsius by 2050 and achieving net zero carbon emissions by 2050 is a challenge and a tremendous economic opportunity,” said John Kerry, the US climate envoy, who participated in the report as a supporter of the US side. “The transition will take place over the next decade and beyond, with large-scale deployments of all clean energy technologies, including nuclear power.”

Ahead of COP26, the argument that nuclear energy should be used for carbon neutrality has been steadily raised, mainly in Europe. Although fossil fuel reduction is necessary, some countries are turning to nuclear power as the transition to renewable energy is delayed. On the 11th, the economic ministers of 10 EU countries, including France, Croatia, Czech Republic, Finland, Hungary, Poland, Slovakia, Slovenia and Romania, jointly sent a letter to the European Commission, adding nuclear power to the EU’s list of sustainable energy sources. They even asked to be added.