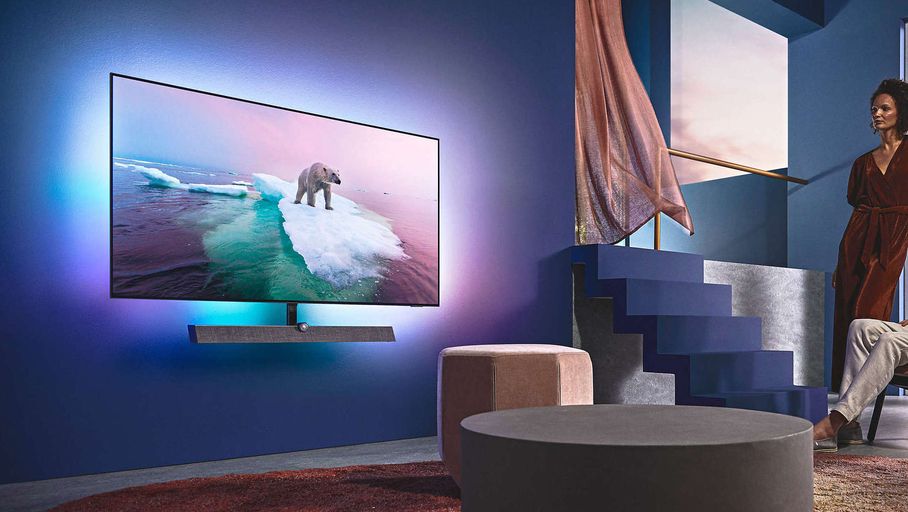 In terms of image quality, the Philips OLED935 television is identical to the Phiips OLED805 and OLED855 already on sale. This television uses an OLED panel of 48 (122 cm), 55 (140 cm) or 65 inches (165 cm) displaying an Ultra HD definition from LG Display and the Android TV system in its version 9.0. Unlike OLED 805, OLED855, OLED865 which are satisfied with a three-sided Ambilight 3 system, the OLED935 operates the Ambilight four-sided ambient lighting system (Ambilight 4). The Ambilight system always does its little “wow” effect, and apparently it’s a real addiction for Philips TV users. The manufacturer claims that 80% of buyers who try Ambilight definitely adopt it. Subsequently, its users renew their television with a model equipped with this ambient lighting system.

The Philips TV operates Android TV 9.0 with a latest generation Quad Core processor, 3 GB of RAM and 16 GB of storage which has been ensuring good system fluidity since 2019. Philips will not immediately switch to Android TV 10 and prefers to bet on system stability 9 for now. Philips also incorporates a specific “Works with Alexa” layer that allows its Android TVs to work with Amazon’s Alexa ecosystem. We also find compatibility with all HDR formats, such as Dolby Vision and HDR10 +, in addition to the classic HDR10 and HLG formats. HDMI remains confined to the HDMI 2.0b version, but they still support ALLM (Auto Low Latency Mode) which automatically reduces the display delay with compatible consoles. Philips has not worked to improve this display delay which remains around 33ms, while Samsung and LG are now dropping below 16ms (only one frame delay). We will check the delay in the display from the first tests, but do not expect a surprise from this side.

This television features the fourth generation Philips P5 processor doped with artificial intelligence. Similar to what Samsung, LG and Sony do, Philips is now leveraging the machine learning to classify the different elements of the image (texture, object, face, etc.) and apply specific filters (color, contrast, movement and sharpness). The rendering of the AI ​​mode is stunning with truly sharper objects on the screen. The Philips OLED935 is delivered with the Philips remote control, a little more pleasant to use than that of last year, with in addition a better finish and, above all, a system of backlighting of the keys (a novelty that we find also on Sony’s premium TVs for 2020).

The big news is the new Dolby Atmos soundbar from Bowers & Wilkins which consists of three main speakers, including a center channel, a woofer and two upward-facing channels for Dolby Atmos effects for a total power of 70 W. The special feature of this audio system is the presence of a separate tweeter placed above the sound bar in order to improve the clarity of the high frequencies. This system has been used for several years on Bowers & Wilkins hi-fi speakers. Philips also confirms that it is the same soundbar that is used on the three versions of the OLED935 namely the 48, 55 and 65 inches. On the other hand, the adjustment is specific to each diagonal so that the sound seems to come out of the center of the television set, the distance between the speaker and the center of the panel being different between the diagonals.