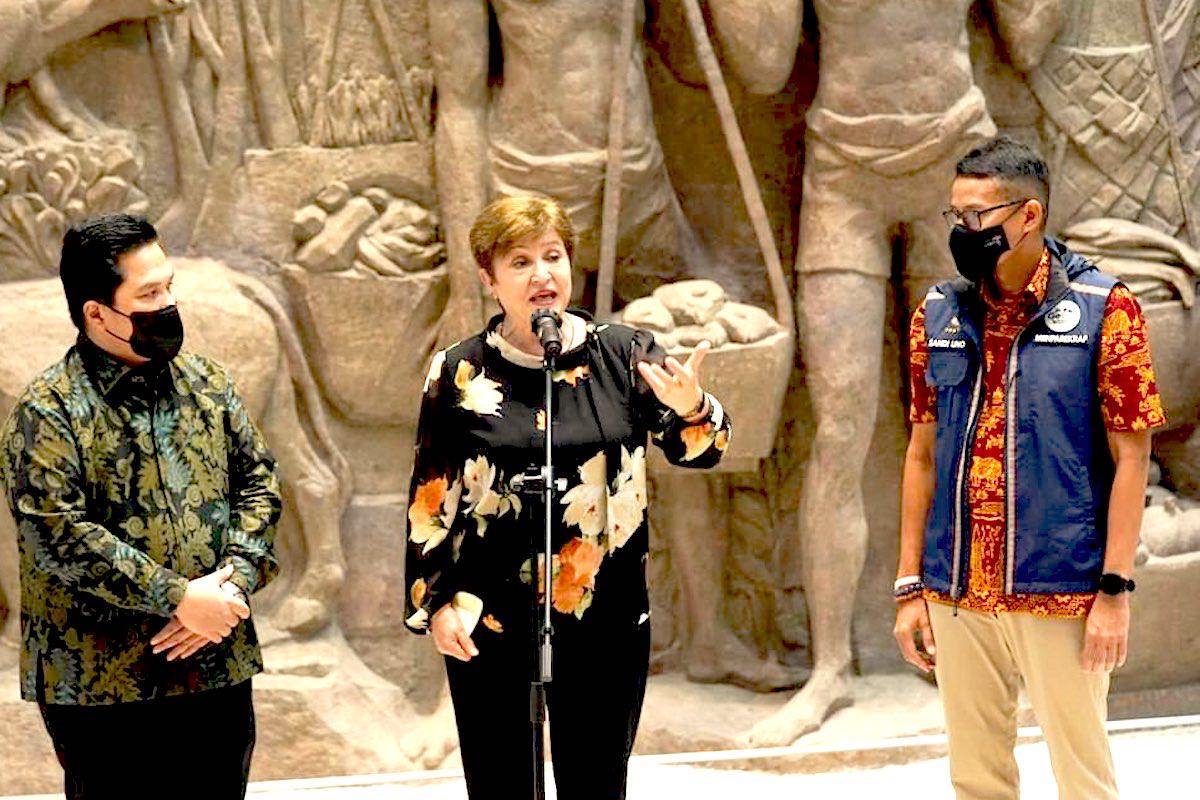 The Managing Director of the International Monetary Fund (IMF) Kristalina Georgieva said she was impressed by the transformation of development that took place in Jakarta after two decades of not visiting the capital city of the Republic of Indonesia.

“Jakarta has changed a lot. The city has had tremendous improvements. Now it looks like the infrastructure of the Metropolitan City, which didn’t exist before,” he said while visiting the Sarinah Mall with SOE Minister Erick Thohir and Tourism Minister Sandiaga Uno in Jakarta.

Georgieva praised the splendor of Sarinah Mall which showcased a variety of products for micro, small and medium enterprises (MSMEs). According to him, the Indonesian people should be proud of the extraordinary values ​​that Indonesia has.

IMF officials visited Indonesia to attend a meeting with G20 finance ministers and central bank governors, one of the topics discussed at the meeting regarding the challenges of the world economy.

Sarinah has become a new magnet for foreign tourists who come to Jakarta. Menparekraf Sandiaga Uno did not even hesitate to invite IMF officials there. https://t.co/S7gwq3OL2p

IMF Director, Kristalina Georgieva said she was impressed by the transformation of development that took place in Jakarta. #TempoMetro https://t.co/ypQ3TMmcFJ

Yesterday at Sarinah Building, Central Jakarta, I was with the Minister of SOEs, Mr @erickthohir welcomed the arrival of the Managing Director of the IMF, Mrs. Crystalina Georgieva. pic.twitter.com/bFk4hlcBB8

Government and Governor Play a Role

The changes and progress that Jakarta has experienced, as stated by Kristalina Georgieva, Managing Director of the IMF, are the result of collaboration between the central government, the DKI Jakarta Provincial Government, the residents of DKI Jakarta and the people of Indonesia.

All played a role and contributed greatly in bringing Jakarta to be developed. For example, the one who designed the initial construction of the MRT was BJ. Habibie, when he was Minister of Research and Technology/Head of BPPT. The Agency for the Assessment and Application of Technology (BPPT) has been merged into BRIN (National Research and Innovation Agency) with the Indonesian Institute of Sciences (LIPI) and various other institutions.

President Jokowi played a role in starting the construction of the MRT from Lebak Bulus to the Hotel Indonesia Station. At that time, there was a problem with the section that the MRT crossed because the owner of the land that the MRT passed did not want to release their land, Anies Baswedan, the Governor of DKI Jakarta who was inaugurated on October 16, 2017 held negotiations with the land owner and it was finally resolved.

Another example, the construction of Transjakarta which is currently a modern mode of mass transportation in Jakarta, the initiator and initial implementer is Governor Sutiyoso, whom I call the Father of Transjakarta. Then continued by Governor Fauzi Bowo, Governor Joko Widodo and Governor Basuki T. Purnama who is popularly known as Ahok.

For its success in realizing the integration of mass transportation modes in Jakarta, DKI Jakarta was awarded as the first city in Southeast Asia to receive the 2021 Sustainable Transport Award (STA) in transportation at the international level. The award was given by the Institute for Transportation and Development Policy (ITDP), based in New York, United States, to the Governor of DKI Jakarta Anies Rasyid Baswedan.

See also  Similar to Omicron, this is how Covid Centaurus is transmitted

The achievement of this award is thanks to the intermodal integration program of public transportation under the umbrella of Jaklingko which is considered to provide convenience and comfort for the people of Jakarta. Governor Anies expressed his pride in Jakarta. Anies is also committed to continuing to strive for a sustainable transportation system whose ultimate goal is the convenience of residents.

Jakarta greets,
Jakarta thank you,
Jakarta gives appreciation to all mothers and fathers.

By taking public transportation, you have contributed to the clean air of Jakarta, you know.

Alhamdulillah, on behalf of the DKI Jakarta Provincial Government, we have just received several certificates that describe the results of the collective performance of all parties in the Transportation and Traffic sector.#JakLingko#JakartaCityGlobal#DishubDKIJakarta pic.twitter.com/w8TECCwLUb

Another role and collaboration given by the residents of DKI Jakarta is to maintain a peaceful and calm atmosphere in Jakarta. In addition, take good care of, maintain and utilize all the facilities built in DKI Jakarta.

In addition, the people of Indonesia, including local officials who often come to Jakarta, also play a role in realizing the changes and progress of DKI Jakarta. Their presence in Jakarta, hotels filled and restaurants became crowded. Likewise, domestic and foreign tourists also contribute to the realization of changes and progress in Jakarta, because they stay at hotels and eat at restaurants, they are subject to taxes.

Thus, Jakarta’s changes and progress are the result of the collaboration of all parties. However, the biggest role and motor of change and progress for Jakarta is Anies Baswedan. Governor of DKI Jakarta.

Hopefully the changes and progress in Jakarta that have been achieved can be continued and improved. Hope, whoever leads Jakarta after Governor Anies Baswedan, will continue to fuel the spirit of collaboration as the key word for successfully realizing the progress of Jakarta and Indonesia.

Do you want to join the Summit series #Y20 which will be held in Jakarta and Bandung on 17-24 July? Look forward to the information on Instagram: y20indonesia2022 and the website https://t.co/YXvEvyjK1c#G20Indonesia2022 #G20 #JakartaCityGlobal #Y20Indonesia2022 #Youth20 pic.twitter.com/3EvZWks57Q