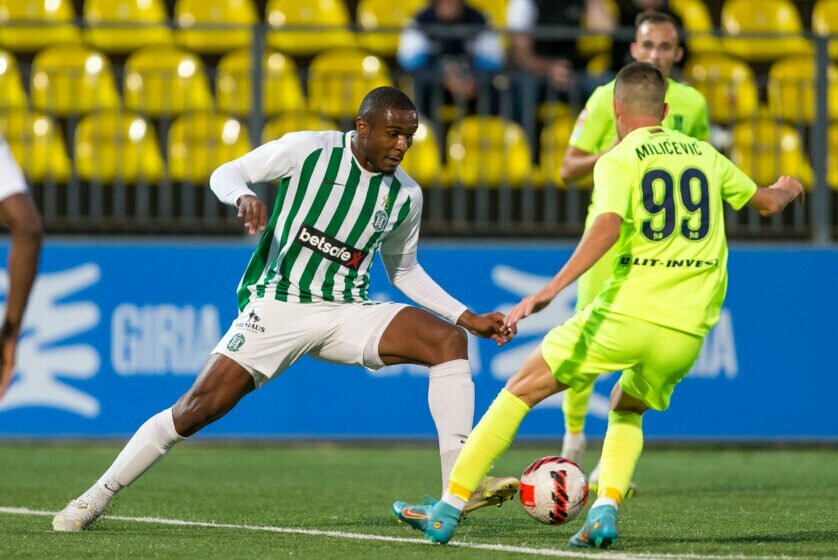 In the quarter-finals of the “Hegelmann LFF Cup” Žalgiris dramatically won the victory. 2:1 beat the Knights.

The opponents took the lead from the 52nd minute when Gytis Paulauskas scored with a header. However, Renan, who scored two goals in extra time, changed the result in favor of Zalgiris.

There were six changes in the starting eleven of “Zalgiris” for this match.

The match for “Žalgiris” started very unsuccessfully. 8 minutes K. Kažukolov did not catch Rokas Filipavičius, who was sprinting after him, and committed a foul near the penalty area. The referee gave a red card for a last-ditch foul.

Left without one player, Žalgiris had to reduce the attacking forces – Ivan Tatomirović replaced Marko Milčkovičius.

For a long time, a lot of the play took place in the middle of the field, with both teams not rushing forward too much. Attacks became more active after half an hour.

32 min. after the pass, Artūras Dolžnikovas ran forward, his path was blocked by Edvins Gertmons and the “Knights” striker failed to put the ball over the goalkeeper.

32 min. Renan broke through on the right side, misled Daividas Malžinskas, but shot wide from a sharp angle.

38 min. R. Filipavičius hit dangerously from a distance. 40 minutes a dangerous shot by F. Ourega was blocked by a defender.

42 min. after a pass from the wing, A. Dolzhnikov shot over the goal.

Right before the break, after F. Ourega’s pass, R. Oliveira made an inaccurate shot.

51 min. after M. Oyewusi’s header, the ball flew near the goal.

52 min. after Choco’s pass to the penalty area, Gytis Paulauskas headed the ball into the goal.

81 min. Mr. Oyewusi finally managed to send the ball into the goal, but the referee recorded a foul.

In overtime, Renan first equalized and then scored the winning goal.