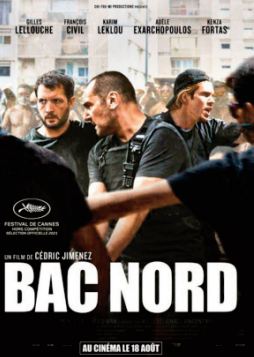 The excesses of the police seen from the side of the uniform: contrary to many films on sensitive neighborhoods, “Bac Nord”, presented in Cannes, plunges into a case that has wavered the Marseille police, by resolutely adopting the point of view of officials.

A sign of the interest aroused by fictions around the Phocaean city, this nervous thriller, presented out of competition and carried by a trio Gilles Lellouche, Karim Leklou and François Civil in “baqueux” was bought in Cannes by Netflix for broadcast in the whole world and should be released mid-August in French theaters. The director Cédric Jimenez is once again inspired by the judicial-police chronicle in Marseille, after “La French” (2014), which looked back on the rise of the mafia Gaëtan Zampa in the 70s and the assassination of judge Michel, but this time puts himself in the shoes of three policemen from the North Bac.

This unit, publicized for its results in the fight against delinquency, ended up being dissolved after the revelation of a series of drug or money thefts, on the sidelines of interventions in the cities of the city. His victims? Most often petty cannabis traffickers, who were stolen tickets or bars of hash. Almost ten years after the facts, the case, traced back to the then Minister of the Interior Manuel Valls, gave rise to a first trial which ended with seven acquittals and suspended sentences for eleven defendants, judgment which the prosecution appealed in May.

The film was shot before this decision, and adopts the line defended by the police officers in question: the abuses are the result of the policy of the number maintained by the hierarchy in what was, at the level of statistics, “the best Bac of France”. “I am three characters who lived for months this story, as they lived it, as they told it to me”, explained the director to AFP. “I don’t think Bac Nord is a ‘pro-cop’ or an ‘anti-cop’ film”.

To a journalist who questioned him at a press conference in Cannes on whether his film was not a caricature of the cities – to keep only the violence – the director replied: “We are talking about anger because we are with police officers who deal with dealers, delinquents, not with the whole population of the northern districts “. “I didn’t want to take sides (but to show) how their work is more complex than you think,” said the director. In “all the problems that we see today (around the action of the police), this must be taken into account: it is also up to the institutions, the State, the hierarchy to assume its responsibilities and to supervise the police “.

In the film, the police remain powerless against the gangs of armed traffickers who hold the points of the deal and do not hesitate to taunt them. “We no longer serve any purpose, the inhabitants of the neighborhoods, they no longer even have the hope that we will come to help them”, cowardly, disgusted, one of them after an intervention. The film shows them driven by the sole desire to do their job well. And illustrates their fall, pursued by a justice presented as blind and soulless.

Unlike reference films on neighborhoods, from “La Haine” to “Miserables”, social distress is only sketched here. On the other hand, history develops the financial difficulties of these low-paid civil servants. “It is rare in action films to find such a strong background, to speak of a hierarchy which lets go of its base. It is a film which speaks of people a little abandoned, whoever they are”, a added Karim Leklou during the press conference.