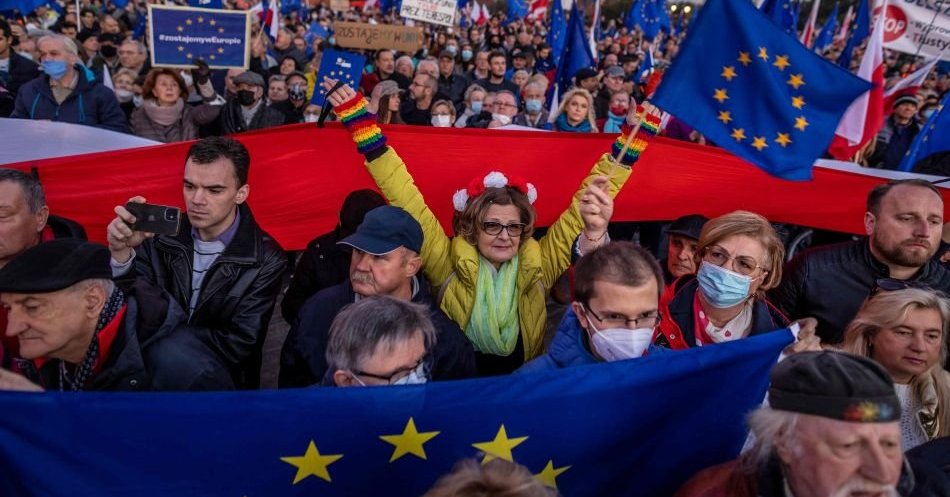 Donald Tusk, the former President of the European Council and now the leader of Poland’s main opposition party, the Civic Platform (PO), has called for people to take part in the demonstrations, warning of the prospect of Polexito’s withdrawal from the EU.

“Tens of thousands of people in Warsaw and more than 100 cities and towns across Poland have come to protest against what this government is doing to our homeland,” Tusk told a large crowd in the capital, flooded with blue EU flags studded with stars.

Tusk asked the people to “defend European Poland” after the above-mentioned court decision was criticized both in Poland and in the Community.

According to polls, membership in the Community remains very popular in Poland, but relations between Warsaw and Brussels have become strained since the right-wing Law and Justice Party (PiS) came to power in 2015.

The main object of disagreement is the comprehensive reform of the judiciary initiated by the PiS, which the EU fears could undermine the independence of the judiciary and democratic freedoms.

The latest turning point in this long-running dispute was the ruling of the Polish Constitutional Tribunal on Thursday. According to government opponents, the CC is an illegal institution because it is rich in PiS allies.

The ruling of the Constitutional Tribunal rejects the primacy of EU law over national law. It states that some articles of the EU Treaty are “incompatible” with the country’s constitution.

The Tribunal also warned the Community institutions not to act “outside their competence” and not to interfere in the reform of the Polish judicial system.

“I am here because I am afraid we will leave the EU. This is very important, especially for my granddaughter, “Elzbieta Morawska, a 64-year-old resident of Warsaw, told AFP.

“Britain has just left the EU, and it is a tragedy; if Poland leaves now, it will also be a tragedy, ”Alexander Winiarski, a 20-year-old Pole studying in England, told AFP in Warsaw.

“This government has transcended all boundaries – it is a mafia state,” Beata, 40, a 40-year-old head of a Warsaw media company who refused to disclose her name, told AFP.

Even before the court ruled, Brussels warned that the case could have “consequences” for the benefits that Poland must receive from the EU’s post-pandemic recovery fund.

However, experts say the ruling of the Constitutional Tribunal, which has yet to be formally published for legal effect, could be a first step towards a possible withdrawal from the EU.

“This ruling is absolutely incompatible with European Union law and must simply be ignored in the case law of general jurisdiction,” said Piotr Bogdanowicz of the University of Warsaw.

“Our membership of the EU is really at stake,” he told TOKFM radio.

However, the government rejected such a perspective.

The head of the Polish government, Mateusz Morawiecki, assured on Friday that his country wants to stay in the European Union.

“The accession of Poland and Central European countries to the European Union is one of the most significant events of the last decade. “Both for us and for the EU itself,” said Morawieckis, referring to the enlargement of the Community to the east in 2004.

“Poland’s place is and will be in the family of European countries,” the prime minister wrote on the social network Facebook.

M. Morawieckis did not signify the ruling of the Constitutional Tribunal. According to him, the principle of the supremacy of constitutional law over other sources of law has been established by courts in other Member States.

“We have the same rights as other countries. We want these rights to be respected. We are not uninvited guests in the European Union. And because of that, we do not agree that we should be treated as a second-class country, “said the Prime Minister.