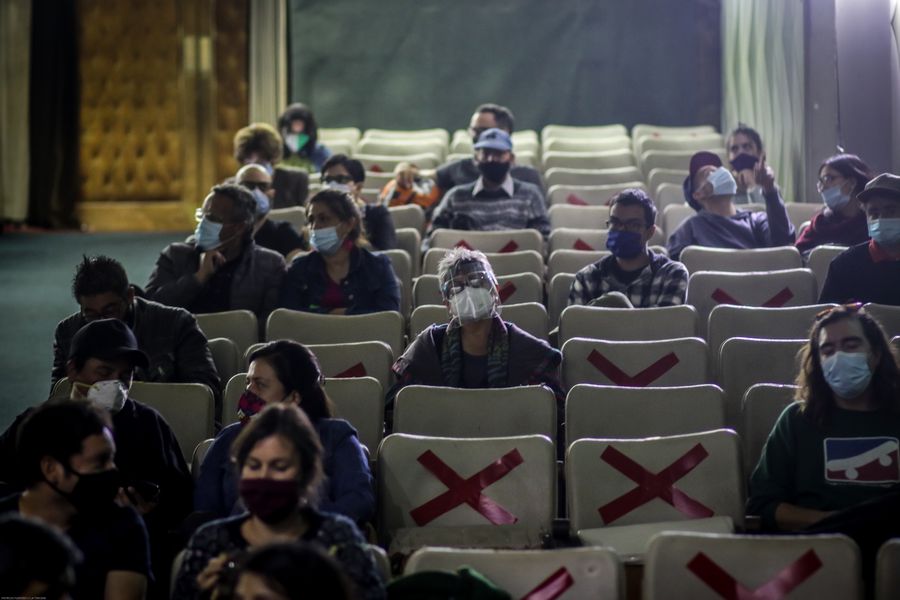 -The movie theater was reopened just three days ago, with about 200 people sitting in the seats. Something that has not happened since March 18, when this classic place, with more than 38 years of life, closed due to the pandemic.

“With the social explosion we had to change our dynamics a lot. Modify schedules, suspend some functions, and above all, finish earlier, but we never suspend (completely) ”, recalls Scarlett Bozzo, cultural manager of the Normandie Art Cinema, a business belonging to the Doll family. Its founder was Alex Doll and today it is run by his sister Mildred. “Luckily we are on a street that is not so main, so we do not suffer damage to the infrastructure. And the public was very respectful with all the modifications we made, ”adds Bozzo.

But the Covid arrived and the ticket office was closed. They took advantage of all the possibilities that existed to survive, such as the Employment Protection Law and they won a fund of $ 18 million provided by the Ministry of Culture, but which only now that they have opened can begin to execute. They also applied for a Sercotec fund and have requested several loans, among other alternatives to survive. “This is how we have remained, but we cannot continue like this for long, for that reason, the transition from the Santiago commune to Phase 4 is excellent news,” she indicates enthusiastically from this place located in Tarapacá 1181, minutes after the first performance after more than eight months.

His main problem – he maintains – is that as long as the cinema chains do not open, there will be no premiere films. But they already have a schedule that they are putting together. Unlike the chains, the business of this type of independent cinema is not in the food and beverages that they sell before entering to sit down to enjoy a film. His earnings are almost entirely on ticket sales.

With regard to capacity, of the three independent cinemas in the center it is the least complicated, since it has a room for 650 people. “With 50% occupancy we feel satisfied. We are very confident, due to all the comments we have seen on social networks, about the reopening ”, explains Bozzo, emphasizing that they already have all the health security elements to work. In addition, the idea is that the 10 people who are currently on suspension from work return to work.

They have not been involved in showing movies online. “Our commitment has always been exclusive to movie theaters and we are going to keep it that way,” explains the cultural manager.

Of course, since last year they have an agreement with Fidocs, which this year will work 100% online, where they are studying doing some kind of online discussion. “We play a lot with the works that have been important in the history of cinema at different times and we want to remain faithful to that editorial line,” concludes Scarlett Bozzo.

– “Gone with the wind” would be a phrase that falls short for Cine Arte Alameda during the first months of the social outbreak and the pandemic, with a before and after that occurred on a hot afternoon on December 27, 2019, where a fire consumed him.

In August of this year, this 27-year-old venue launched an online art cinema channel by subscription (centroartealameda.tv) that already has more than 1,000 registered. It has two values, a plan of $ 3,890 per month that is automatically renewed by credit card, or a manual system that is paid once a month for $ 4,280. In total there are more than 40 films. And just a few days ago they launched a variant where, apart from the payment system, there is a “free channel” with various titles available.

“Cultural companies are always surfing,” says Roser Fort, director of the Centro Arte Alameda (which includes the cinema), regarding the first weeks of 18-O, and adds: “We are in ground zero, but we reinvent ourselves, opening to the public and carrying out various activities. But the fire came and we had to think about what to do, because we were still alive in our memory ”.

Two project funds were won. One was about the formation of audiences of the Ministry of Culture, and the other, of the Other Collaborating Institutions Program (POIC) of the same entity. The first was $ 94 million and was destined to administration, purchase of films, implementation of lamps for projectors and personnel, among other elements, with which they also managed not to fire their 15 workers.

Those monies also helped them for the second part of the strategy: to function temporarily in physical form at the National Institute Extension Center (Ceina), which they began to do just before the pandemic. They did the pilot on February 27 with the Colombian film Monos, where there were 500 people. However, the Covid arrived. Now that Santiago has gone to Phase 4, they are ready to start at Ceina, in a 200-seat room.

“Clearly, online earnings are well below the face-to-face system, but it is a channel that is here to stay and is looking for business models such as alliances with companies to advertise on the site,” says Fort.

Anyway, they are optimistic with the reopening in the space of the National Institute. “We are waiting for the public with all the security measures that are required,” says the director.

And the reconstruction in the Alameda? Fort explains: “Although many ask us why we are going to rebuild in such a devastated area, it seems to us that it is an obligation to think about lifting it. We are looking at several alternatives. We have spoken with authorities and we have the help of the Iglesis y Prat architects office, while we look for the resources ”.

Although there is no clear date, since it depends a lot on the support, the purchase of the land and its reconstruction is a project of approximately 140,000 UF.

-With nearly 40 years of life, Cine el Biógrafo is one of the oldest venues of this type that still remain in Chile. Its founder and current owner, Daniel Escrigna, is preparing everything for its reopening, planned for about two more weeks. Meanwhile, any neighbor or visitor to the Lastarria neighborhood can go for a coffee at the place with the same name and take advantage of seeing the freshly painted facade of this classic in the center of the capital.

“Our main advantage is that – unlike Cine Arte Alameda or the Normandie – we own the property, something that has dampened the economic issue during these months,” says Carolina González, Communications Manager at El Biógrafo.

Five of its employees took advantage of the Labor Protection Law, with the exception of its projectionist, who despite being 80 years old and retired, continues to receive his salary and has gone through all the technologies from his 16 years-age since the one dedicated to this trade-, from celluloid to digital formats.

González acknowledges that although they have been affected since October 18 due to their geographical position, there has been no great damage, other than graffiti. “People love this sector and take care of it. In reality, we were complicated during the social outbreak because it was not possible to attend when there were demonstrations, but there has been no destruction of premises ”, he says.

El Biógrafo hopes to reopen with the same schedule as when they closed in March and there will be a few weeks of white march to see the reaction of the public. They did a survey on social networks, where 75% of 500 people responded that they would go to the room as soon as they opened. They have pre and post function sanitization measures, alcohol gel dispensers throughout the entrance hall and temperature measurement.

With regard to capacity, the interlinear separation between row and row, of more than one meter, is good news for them. They will also have a separation system of two seats for each person (or group of people who come together) who sits. By having the sale numbered, this modality is easier. A “good function” in terms of profitability would be 100 occupied seats, of the 180 that exist in total.

“During these eight months of pandemic, everyone has increased the use of streaming, but the magic of going to the movies is something unique and invaluable, especially for lovers of this world. And although everything is still very uncertain, due to the newness of this situation, I really hope that people really want to go back, ”says Carolina González.