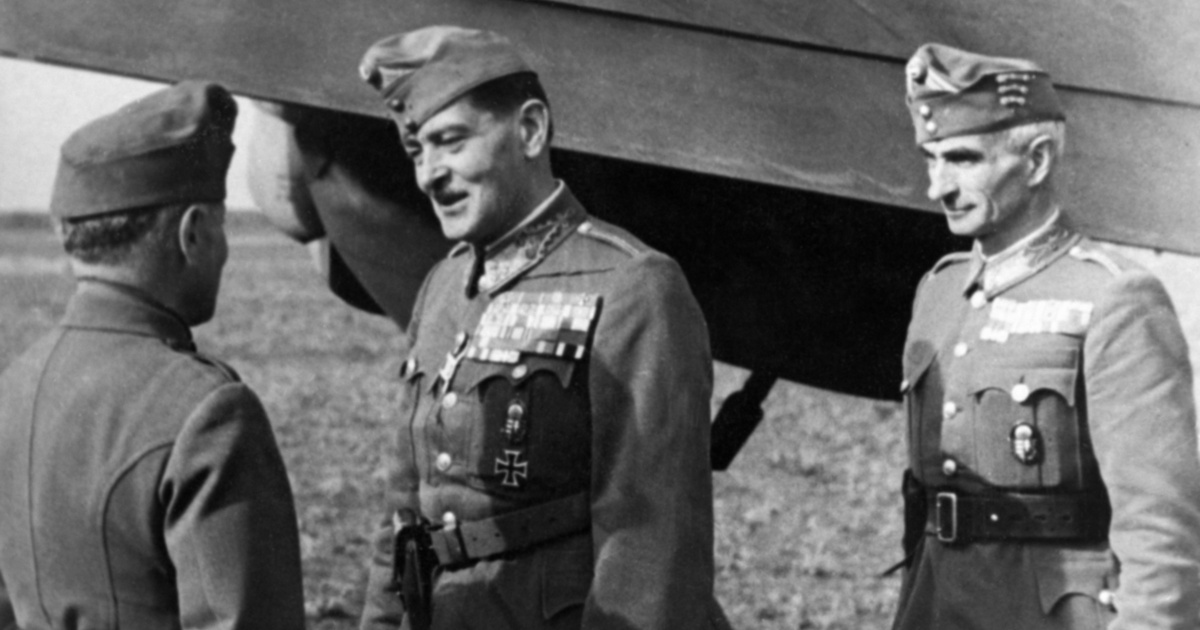 Gusztáv Hautzinger was born on October 21, 1883 in Rajka. His father, Sándor Hautzinger, previously served in the Imperial and Royal 76th Infantry Regiment. After the family moved to Budapest, he was a classmate of György Lukács, later Marxist philosopher, among others, at Deák Tér Evangelical High School. After graduation, he studied at the Ludovika Academy, and was commissioned a lieutenant in 1905. Hautzinger quickly rose through the military ranks: in 1910 he was appointed first lieutenant, in 1915 he was appointed captain, in 1919 he was appointed major, and in 1921 he was appointed lieutenant colonel. When he was admitted to the Order of Chivalry in 1924, he took his mother’s surname (Vilma Jány). His military career remained unbroken, as he was promoted to colonel in 1925. For five years from 1931, he was the commander of the I. main group of the Ludovica Academy, who organized a corridor of the relics of the truncated country in the institute. He was appointed general in 1934, lieutenant general in 1937, and infantry general in May 1941. (The name of this last rank was changed to Colonel General from August 1941.)

Commander in the Don bend

From May 1938, he acted as the chief of the military office of Governor Miklós Horthy. In February 1939, he was appointed corps commander of the Royal Hungarian First Army in Budapest. He held this position until March 1, 1940, when he became the commander of one of the three armies set up as a result of the reorganization of the Hungarian Royal Army, the 2nd Royal Hungarian Army.

He spent a lot of time on the front lines and was more observant than operationally in control. He was also among his soldiers when he was seriously wounded by a mortar shell fragment on August 25, 1942. And when the Soviet troops threatened to encircle the Hungarian Royal 2nd Army in the Don Bend, on January 24, 1943, he issued 294/2. hds. I. a. 43. I. Military Order No. 24for which after the war many people referred to him only as “the Don executioner”:

Let everyone know that I will not let anyone leave here with illness, injury, or frostbite. In the area where we are ordered to assemble, where we carry out the reorganization, everyone will stay there until they are healed or destroyed. […] Order and iron discipline must be restored with the hardest hand, if necessary, by extermination on the spot. There is no exception to this, be it an officer or a non-commissioned soldier who disobeys my orders, he does not deserve to suffer his miserable life any longer and I will not allow anyone to increase our shame any further.

The military order caused general indignation, which is why Jány belatedly withdrew it on April 4.

In January 1943, there were a total of 198,000 soldiers in the 2nd National Army at the front, of which 42,000 disappeared and died, 28,000 returned home wounded and about 26,000 were taken prisoner of war, most of whom were never able to return to Hungary. After the colonel-general returned home from the Don bend on the last train, on August 5, 1943, Horthy relieved him of his command post. He lived in retirement in Budapest until the end of the war, then he left for Germany with his family before the Soviet occupation.

On June 19, 1945, the Minister of National Defense declared him a war criminal, demoted him and expelled him from the army. In 1946, after the death of his wife, he voluntarily returned home. He arrived in the country with a shipment of prisoners of war and surrendered. He was detained on October 7, 1946.

A war crime of two degrees

The indictment against Gusztáv Jány on September 25, 26, 29 and October 4, 1947 discussed the Budapest People’s Court. The council headed by Béla Pálosi included representatives of the six coalition parties. Of the witnesses for the defense, only Vilmos Nagy, a retired colonel and the Minister of National Defense between 1942 and 1943, was questioned.

Referring to the service regulations, Jány claimed before the people’s court that he had never violated them. He did not feel guilty, since, as he claimed, he was also carrying out orders.

I admit that I approved the death sentences presented to me by the camp courts. I do not remember the names of the executed persons, as well as the crime they committed, for which they were sentenced to death. If any camp court passed death sentences against Nazarenes because they did not want to fight or do military work because of their faith, I approved these sentences.

The Budapest People’s Court announced a verdict on October 4, 1947, according to which Jány did not actively help the country drift into war, but

there is no doubt that he did not try to prevent it, although he would have been able to do so due to his position in a leading public office, and thus committed the war crime.

The People’s Court found him guilty of two counts of war crimes, which he committed as an instigator, and therefore sentenced him to death by bullet as a total punishment. After the verdict was handed down, Jány did not ask for a pardon because, as he stated before his judges, that would have been an admission of his guilt. The Budapest People’s Court and the National Council of People’s Courts also qualified him as worthy of pardon, and even the presiding judge submitted him for pardon. However, President Zoltán Tildy rejected the request on November 22. The request of the defense was not even judged. Gusztáv Jány was executed on the morning of November 26 in the yard of the old Collectorate Prison.

He got his honor back, but not his rank

Jány was considered a war criminal during the communist regime. After the system change, in 1993, the General Prosecutor’s Office submitted a review motion to the Supreme Court to set aside the judgment of the Budapest People’s Court.

In its motion, the prosecution argued that Jány had exceeded the provisions of the applicable service regulations,

when he gave the order to persevere to the end, to the last bullet, and threatened those who refused with extermination, or, if the defiance occurred as a group, with decimation. The prosecutor’s office did not classify the issuing of the order, which authorized the Hungarian army to take hostages and take revenge on them in case of subversive acts, as a war crime. In the Second World War, both sides took hostages, and the taking of hostages was prohibited by the relevant international conventions only after the war. Even the People’s Court decision of 1947 recognized this: it could not be proven that decimation had taken place, and no probative data was found about the execution of hostages either.

On October 4, 1993, the review council of the Supreme Court annulled the People’s Court verdict of 1947. According to the justification, the case was withdrawn from the military court, and the charge was examined by politically engaged people’s judges who were not familiar with military life conditions. The commander was convicted of crimes he did not commit. For example, it was blamed on the fact that, long before the breakthrough, the Hungarian army lost nine thousand soldiers in the battle of Uriv in September 1942. Yes, but Jány was in Budapest at the time, and the Germans launched the attack against his orders.

The Supreme Court has refrained from taking a stand on issues that are for historians to judge. Thus, the subject of his analysis was not the just or unjust nature of the war, nor the military, professional evaluation of the military operations

– stressed the presenting judge of the case, István Kónya. Also present at the trial was Kéri Kálmán, a parliament member and colonel at the time, and after the acquittal was announced, he saluted in front of the pulpit and thanked him for the verdict.

Years later, in 2011, the lawyer István Galli, who defended the late general as an assigned defender, initiated the appointment of his protégé as a posthumous colonel-general at the President of the Republic. According to the lawyer, in 1993 the colonel-general got his honor back, but not his rank. The matter was complicated by the fact that Jány had already appeared before the People’s Court as a civilian, as the Minister of National Defense had previously demoted him and expelled him from the army. This is also the explanation for the fact that in 1993 the review council of the Supreme Court was not able to deal with the question of rank. By the way, the Office of the President of the Republic sent the lawyer’s request to the Ministry of National Defense for further consideration.

In other words, Gusztáv Jány’s case cannot be said to be closed even on the seventy-fifth anniversary of his execution.

(Cover photo: Major-General Gusztáv Jány, commander of the 2nd Hungarian Army, arrives at the front after recovering from his wounds. The exact date and location of the original recording is unknown. Photo: MTI)