INDIANA, KOMPAS.com – The Consulate General of the Republic of Indonesia (KJRI) Chicago on Monday (24/8/2020) held a business meeting in the city of Greensburg, Indiana State, in order to promote the potential for cooperation in trade and investment and tourism (TTI) in accordance with the focus of Indonesia’s economic diplomacy.

The event was held at the Mayasari Indonesian Grill restaurant owned by the Indonesian diaspora and was attended directly by the Mayor of Greensburg, Joshua Marsh as well as business people from the chamber of commerce and industry as well as business associations. soy, and an exporter under the US Midwest region.

“The Indonesian government is committed to further enhancing Indonesia’s cooperation with Indiana,” said the Indonesian Consul General in Chicago, Meri Binsar Simorangkir, in his opening remarks.

Indiana was also chosen because the state is one of the US’s main agricultural production centers.

Also read: The irony of Indonesia, the country of Tempe, the majority of soybeans are imports

One of Indiana’s leading products is premium quality soybeans, supported by seeds and mastery of advanced agricultural technology.

That is why Indiana is considered a potential partner for Indonesia in transferring soybean production technology, developing technical cooperation and sharing experiences and applications.

Mayor Marsh expressed his appreciation and positive response to the potential for this cooperation and offered to form cooperation sister city between the city of Greensburg and similar cities in Indonesia.

KJRI Chicago A visit to the Steward Seed was guided by seed owner Alex Steward.

Marsh also expressed his desire and related business people to visit a number of countries in Asia, including Indonesia, to realize sister city cooperation as well as encourage increased cooperation between the two cities.

“In order to realize these cooperation plans, the Mayor of Greensburg’s office is ready to draft an agreement as an umbrella for cooperation, at the same time plan of action To make this happen, of course after the Covid-19 pandemic ends, “said Mayor Marsh during the discussion.

Also read: US Covid-19 Epicenter Shifts to Midwest, Here’s the Appeal of the Indonesian Consulate General in Chicago to Indonesian Citizens

In addition to the promotion of cooperation, KJRI Chicago Also present to support the progress of the Indonesian diaspora in Greensburg, Mayasari Effendi, who actively promotes Indonesian culture and culinary in Indiana through her Mayasari Indonesian Grill restaurant, especially the tempeh menu with a wide variety of dishes.

Not only promoting culture through Indonesian dishes, Mayasari will also establish the first large-scale tempe factory in the Midwest.

The plant land and equipment are ready, and are expected to be fully operational by early 2021. 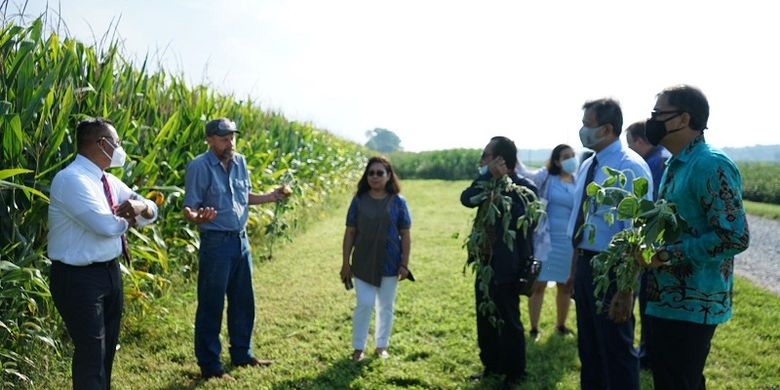 KJRI Chicago The Indonesian Consul General and his entourage listened to the soybean expert’s explanation about the superiority of soybeans from Indiana.

So far, Mayasari and his family who have a home industry for tempe production can only produce hundreds of packs, but after the factory is established, it is hoped that later they can produce 1.6 million packs per week.

According to Mayasari Effendi, his and his family’s desire to set up a tempe factory in Greensburg is because more and more people in the US are consuming tempe, not only from Greensburg but orders also coming from other states.

So far, tempe is more commonly consumed on a large scale on the East and West Coast of the US, so the plan for this tempe factory in the Midwest is something new, or “venturing into new turfs”.

Also read: The Indonesian Consulate General in Chicago Holds A Journey to Indonesia

This coal fertilizer is the result of research by an inventor from Indonesia and recently received recognition in the form of a patent from the US Government.

In addition to explaining the advantages of coal fertilizer, he also offers investment cooperation in the form of establishing a coal fertilizer factory in the Midwest.

“Indiana is one of the largest coal producers in the US,” said Steve. “So it is fitting that the first coal fertilizer plant to be established in this state, to ensure a sustainable supply of raw materials, as well as to facilitate the distribution of fertilizers produced to Indiana farmers.”

Association Soy Indiana and the Department of Economic Development Cooperation of the City of Greensburg who were also present expressed their interest in further exploring the offer to establish a coal fertilizer plant.

They also agreed that Indiana was a strategic location for its founding. According to the latest data, Indonesia is currently still importing soybeans from abroad to meet its domestic consumption needs.

During the last 5 years, Indonesian soybean imports from the US were generally obtained from the states of Illinois and Ohio.

As one of the regions in the US that is also a source of quality soybean production and a growing industry, Indiana has the potential to increase its export and import trade with Indonesia.

The Indonesian Consul General in Chicago also visited soybean farms belonging to the Indonesian diaspora, the location of the candidate for the first tempe factory in the Midwest, and the largest supplier of plant seeds and soybeans in the Midwest called Steward Seed.

In accordance with the topic of discussion on soybeans, at this business meeting the audience also enjoyed soybean-based Indonesian specialties, namely tempeh, which has been processed into tempeh salad and tempeh rendang.

The special culinary promotion of the archipelago is also complementary to the promotion of tourism destinations in Indonesia, where culinary riches are seen as being able to attract tourists to visit a country.