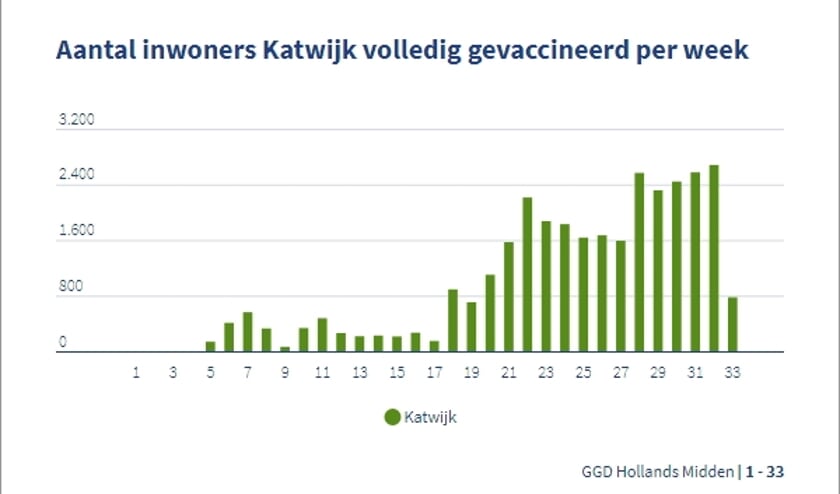 Another small decrease in corona infections in Katwijk. Last week, 52 infections were reported to GGD Hollands Midden out of a total of 390 tests. Last Monday there were 7 new infections and another 13 on Tuesday.

No people have been admitted from Katwijk in the past week due to the corona virus and no one has died from it.

36,907 residents of Katwijk have now had at least one shot. 32,054 people have now been fully vaccinated. In Hollands Midden, to be precise in Alphen aan den Rijn, the millionth jab was taken last Saturday.

Test street Katwijk closed
As more people have been vaccinated, the demand for testing has declined sharply recently. The GGD will therefore close the test location in Katwijk from Sunday 29 August. The test locations in Leiden, Gouda and Alphen aan den Rijn will remain open.

At the same time, the GGD Hollands Midden is taking into account a possible increase in the number of infections and therefore the need for testing capacity. This increase may be caused by returning holidaymakers from abroad. Travelers are advised to be tested.

In addition, the start of the new school year may lead to more infections and thus the demand for more risk-oriented testing. In order to be able to quickly and flexibly detect outbreaks of sources of contamination in all kinds of places, the GGD HM will start working with mobile test buses from September. These are also used to test where a possible increase in the number of infections can be expected. Testing where it is needed without an appointment.

Support for measures
During the previous measurement, fewer people were in favor of sticking to the basic measures. In this last measurement, from the beginning of August, we see that the support among participants has remained the same or has even increased again this round. Avoiding crowded places, keeping a distance of 1.5 meters, working from home and wearing a face mask in public transport will receive more support from the participants. This probably has everything to do with the recent revival of the virus, the participants feel more threat from the virus again.

In this measurement, the participants were asked for the first time whether they ventilate their house sufficiently: almost everyone has a window open or ventilates the house when they are at home and four out of five participants have a window/ventilation open during a visit. These results come from the 14th measurement of the corona behavioral research.