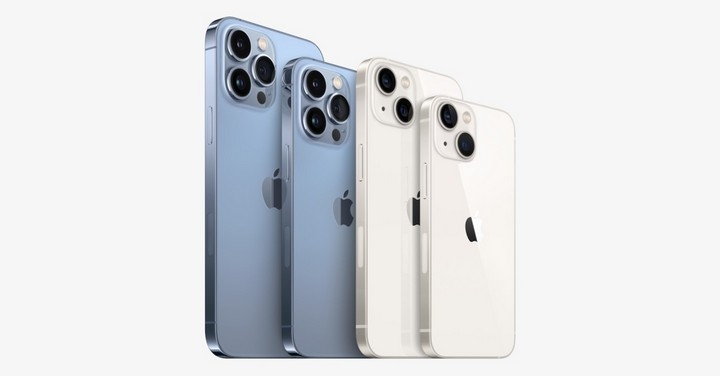 After a whole year of Internet rumors, Apple announced the new iPhone smartphone for 2021 at its online press conference today (15), as expected, and the model is not shy, and it is directly called iPhone 13. Like the previous generation iPhone 12 series, iPhone 13 has four models: iPhone 13 mini, iPhone 13, iPhone 13 Pro and iPhone 13 Pro Max. The four models will be pre-ordered on 9/17 in Taiwan and listed on 9/24.

The design of the four iPhone 13 series continues the right-angle side design of the iPhone 12 last year. The iPhone 13/13 mini uses an aluminum frame material, while the iPhone 13 Pro / Pro Max uses a stainless steel frame. The four models also maintain the previous generation. IP68 waterproof grade, the front is made of super-ceramic shield (Ceramic Shield) glass developed in cooperation with Corning, providing the highest protection against scratches and drops.

The iPhone 13 series maintains the multiple choices of the previous generation in color matching. The iPhone 13/13 mini has a total of five color systems: starlight, midnight, blue, pink and (PRODUCT) RED; while the iPhone 13 Pro / Pro Max has There are four colors: graphite, gold, silver, and sky blue.

In addition, the two models of the Pro version finally support ProMotion technology as rumored to support up to 120Hz update rate display, and support automatic update rate adjustment, which can be adjusted between 10Hz and 120Hz according to the content and the speed of the user’s finger sliding on the screen. Automatic adjustment, taking into account power saving and smoothness. In addition, the iPhone 13 series, as previously rumored, narrowed the bangs on the screen, which is 20% smaller than the previous generation; however, Apple still maintains the setting of only supporting Face ID this time, and does not add the function of Touch ID. .

▲ The bangs of the iPhone 13 series have become narrower, but the Face ID function is maintained, and the camera pixels remain 12 million.

Equipped with Apple A15 Bionic processor

The new generation of iPhone 13 series are equipped with the new Apple A15 Bionic processor. This processor is built with a 5nm process. The CPU adopts a 6-core design, including 2 new performance cores and 4 new energy-saving cores. The performance is advertised as compared to the competition at the same level. The opponent is 50% higher; and the GPU part is slightly different: the A15 Bionic processor of the iPhone 13/13 mini has a built-in 4-core GPU, while the GPU of the iPhone 13 Pro / Pro Max has 5 cores, so the graphics In terms of performance, the Pro version is even better. Even the non-Pro version with a 4-core GPU, Apple emphasizes that the graphics processing performance is 30% higher than that of competitors at the same level.

In addition, the A15 Bionic processor is also equipped with a new 16-core neural network engine, emphasizing that it can perform 15.8 trillion operations per second, so it can improve the performance of machine learning and AI.

▲ iPhone 13 series are equipped with Apple A15 Bionic processor.

The camera function that the iPhone has always emphasized has also been improved on the iPhone 13 series. First of all, in the iPhone 13/13 mini part, these two models still use the standard + 120-degree ultra-wide-angle dual-lens main camera configuration. The pixels of the two lenses maintain a configuration of 12 million pixels, but the photosensitive element of the standard lens has become larger. In addition, it has also changed from the previous generation of OIS to the same sensor mobile anti-shake technology as the iPhone 12 Pro Max, so the dual lenses of the iPhone 13 are arranged diagonally.

▲ The standard lens uses a new photosensitive element, has a pixel size of 1.7μm, maintains an aperture of F1.6, and supports 100% Focus Pixels.

▲ The standard lens adopts the mobile anti-shake technology of the photosensitive element.

▲ The ultra-wide-angle lens maintains a 120-degree viewing angle setting of 12 million pixels, but it also uses a new photosensitive element.

In the Pro version, Apple maintains the settings of a 12-megapixel three-lens plus LiDAR lens, including standard lenses, 120-degree ultra-wide-angle lenses, and 3X telephoto lenses. The standard lens uses a larger photosensitive element, so it has 1.9 The pixel size of μm, and the aperture is also increased to F1.5, you can get more light in the night shooting. Incidentally, the 3 lenses of the Pro version now support night mode shooting.

As for the camera function, the iPhone 13 series has added a new “Photo Style” function, which allows users to fine-tune their favorite photo styles. Apple pointed out that the “Photography Style” function allows users to apply their preferred hue and color temperature settings to photos, but still retains the natural tones of the sky and skin. In the photography style, Apple presets four templates: “Vivid” and ” “Rich Contrast”, “Warm Color” or “Cool Color” can be directly applied or further fine-tuned by the user. As long as the style is set once, it will look the way it wants every time after shooting.

In terms of video recording, the entire iPhone 13 series will be equipped with a new “movie-level mode” recording function, which allows users to shoot a focus shift effect similar to that of a movie lens. When recording through the “movie-level mode”, the iPhone will apply the area other than the subject Shallow depth of field effect, and will intelligently detect where the subject is looking, or a person entering the viewfinder, to automatically switch the focus area, making the picture more tension. In addition to automatic detection, users can also re-edit the focus point of movies in film mode after shooting, and support recording in Dolby Vision format.

▲ “Film-level mode” recording can automatically detect the subject and switch the focus point.

▲Users can also edit the video afterwards and customize the focus method or depth of field.

▲ The short film that Apple played at the press conference, recorded and edited through the “movie-level mode”.

Another new recording function is “ProRes”, which is mainly designed for professional audio-visual professionals. It emphasizes the high color fidelity and low compression rate. It can easily import ProRes videos into Final Cut Pro for subsequent processing and editing. Apple Emphasize that users can have an end-to-end professional workflow. ProRes recording function will be provided to Pro model users later.

In addition, the iPhone 13 series also continues the previous generation of MagSafe magnetic wireless charging technology, and is compatible with the MagSafe accessory ecosystem; Apple also announced a new MagSafe card package accessory at the press conference, which can support Find My function, if the card holder is accidentally lost, you can check the location through the Find My function.

This time, the iPhone 13 series in Taiwan is also one of the first wave of listing countries. It is expected to open for pre-order at 8pm on September 17 and will be on sale on September 24. The prices of each model are as follows: