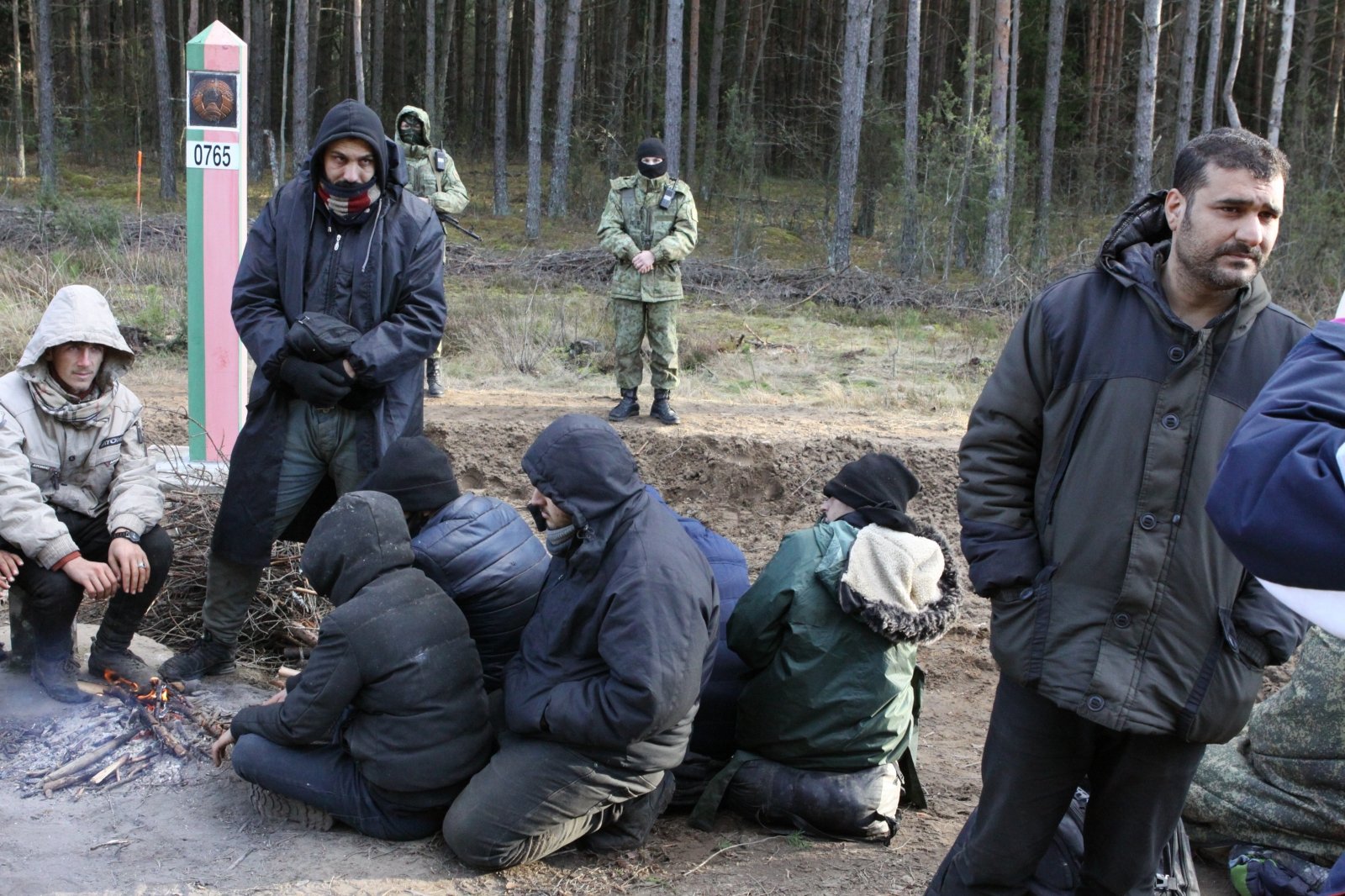 A group of thirteen men from Iraq, some of them wrapped in sleeping bags, are burning a small bonfire on the Belarusian side, near the Lithuanian border, at Dieveniškės loop (Šalčininkai district). In one step or several – the territory of the European Union, that is, Lithuania. But they don’t go there.

Nearby, Belarusian officials armed with machine guns were carefully guarding them.

This is the same group that became famous when a border guard dog (at that time Belarusian officials blinded his owner, a Lithuanian official) was bitten into a sleeping bag, which later turned out to contain a man. Lithuanian border guards subsequently claimed that he had not been harmed. In fact, and at the time of her dealings with Delphi, all the men were seemingly healthy.

Men know they will not be admitted to the EU. On the same day, they inquired about the phone number of the Iraqi embassy in Moscow. He got it. They also told Delfi journalists that they wanted a home. Lithuanian officials are enforcing the decision to reverse illegal migrantsand the Belarusians are not allowed to return home.

An English-speaking man in the group said they came from Iraq, from the Kurdistan region. He agreed to answer journalists’ questions:

– Where did you come from?
– From the Kurdistan Region of Iraq.

– What are you doing here?
– We were brought here. We’ve been stuck here for ten days. We cannot enter any state.

– We are seeing the Belarusian border guards. Do you mean they brought you here?
– Yes.

– Do you want to enter Lithuania? You are completely on the border.
– No, we want to go back to Iraq.

– We know you called the embassy.
– Yes, we called the Iraqi embassy. They are trying to help us, we are waiting now.

– If you turned in the other direction, what would those border guards do?
– They’re with us everywhere. We have tried to go back many times, but they bring us back again and again.

– How did they get you here?
– Military trucks. We had valid visas.

– Could you tell me more?
– Excuse me, I cannot tell you more, I cannot talk much about this situation.

– Why did you come to Belarus at all?
– Everyone came here because it was promised that Europe would accept everyone, legally, that it would be possible to cross borders legally. But we were brought here, a lot of people. One man is missing – a man with a four-year-old child, who has been missing for five days.

– Now – yes, but at first, when you flew to Belarus, where did you want to travel?
– They wanted to travel to Germany.

– Are they all?
– Yes. People are coming here for this.

– How long have you been in Belarus?
– Ten days. In the forest. And eleven days – in Belarus.

– How are you surviving? I see you’re burning bonfires.
– The Lithuanian army helped us – gave us food and water.

– We know you tried to get here once.
– It seems to me that I have sent you a voice message.

– Well, do you have food?
– As I mentioned, Lithuanian soldiers gave us food and provided it.

– What place were you promised to be taken to?
– Told us – to Europe.

– How are you feeling now?
– We feel bad. Because the nights are cold. And our country was hot. It’s different here, it’s very cold here.

– What did you do in Iraq? You speak excellent English.
– I graduated with a master’s degree in law.

– Do you feel in danger here?
– Well I do not know. The last time I was told was that you spoke English, you could not return to Belarus. I hope everything will be fine.

– When you return to Iraq, will you spread the word that access to the European Union is not as easy as promised?
– Yes, of course. Now people already know.

The villagers are not afraid

There has been an increase in illegal activity in the Dieveniškės loop in recent days. It had been quiet there for a while before. On Saturday, while visiting Delphi, border guards were intensively searching for seven migrants who crossed the border illegally at night (judging by the significant footprints in the strip).

He worked as a cynologist. It was decided whether to raise the helicopter. The border guards are assisted in their work by the military. They appreciate their help.

Border guards notice an interesting trend that more than half of the migrants they meet do not even want to go to Lithuania. They are on the wall and stay. Sometimes there are situations when, under the pressure of the Belarusian regime, they cross the border into Lithuania, but as soon as they walk sideways along the border, they return to Belarus themselves.

Residents of local villages say they are not afraid of them, although they are not specifically looking for contact with them either. One young man from Stakai village said that now “migrants are coming again, both men and families are going”. He himself said once at night he saw several of them just sitting at the bus stop, “then they caught them on the seventh morning.”

There are all sorts of legends about migrants in the villages, that some people in the village stole a goose (although it is not known whether it was not taken by a fox in a forest-surrounded area), someone went to their house and sat on the porch. Some said that people saw them in one village, others in another.

Asked if they were afraid, people shook their heads. “And what are you afraid of here?” Said a woman she met in one of the border villages. She also said that she had heard that a migrant had come to someone, “gave her food, and she fell asleep in the gazebo, then the border guards came and took her.”

An old man of respectable age from the village of Dainavėlė, where people told me when they went astray, told us that we were doing a report, quickly took us through the yard, behind the garden and showed me towards the forest that they were walking along the forest. Showed to an abandoned house in the wilderness that they might be sleeping there. “But I’m not going there,” the old man said.

By the way, Lithuanian border guards told Delfi that relations with colleagues from Belarus had completely changed. Lithuanian and Belarusian officials who met at the border a couple of years ago said goodbye, sometimes in a different word, and now everything is different. “If you say goodbye to them, one in five or none at all will answer,” the border guards said.

2 foreigners were admitted to Lithuania on humanitarian grounds on Friday. Since the beginning of August, when border guards acquired the right to refuse entry to foreigners from Belarus, 7,200 have not entered Lithuania (data from midnight on Friday to Saturday). Lithuanian border guards and soldiers assisting them professionally during the migrant crisis lost their service weapons at the border last day.

Border control on the Lithuanian side is intensified. During the monitoring and control of illegal migration, on Friday the officers of the SBGS Vilnius Border Team detained 7 persons in two places of the capital.

They had Spanish identity cards and introduced themselves as citizens of that country. SBGS officials immediately found the identity cards to be completely counterfeit. It turned out that all 7 people also have passports of Iraqi citizens. The border guards launched a pre-trial investigation into the forgery of the document or the use or realization of the forged document.