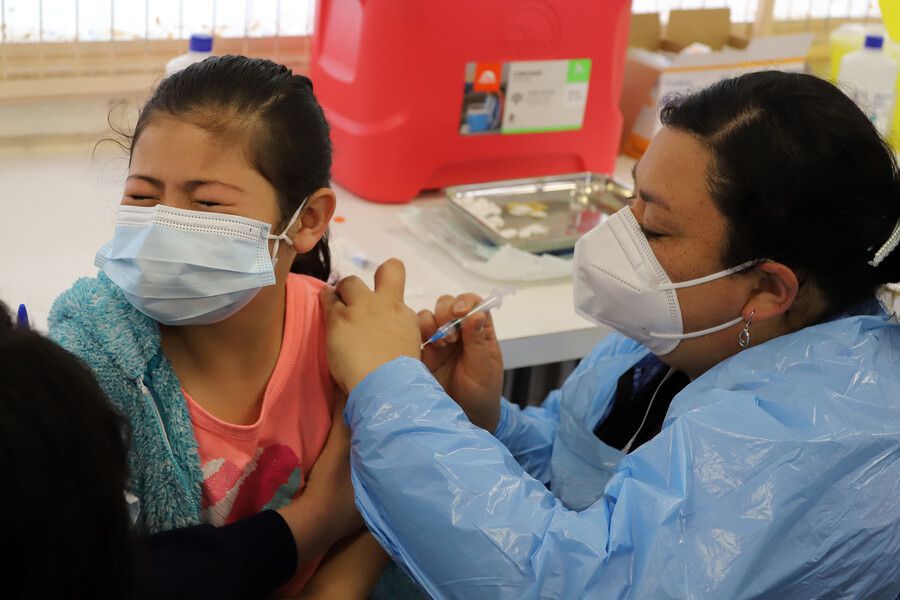 In December of last year, the Public Health Institute (ISP) delivered the first emergency use authorization for a vaccine against Covid-19 in people over 18 years of age. This was the case of the Pfizer-BioNTech laboratory, which was joined a month later by the Chinese company Sinovac, with its CoronaVac formula.

Today there are six vaccines that have obtained permission, of which four are being used -from Sinovac, Pfizer, AstraZeneca and Cansino laboratories- in different age ranges, from the extensions and restrictions that the ISP has established, taking into account the history of each vaccine.

But even considering all authorizations and vaccinations, children under the age of six are not included in the immunization plan. Although this is expected to change next week, with the analysis that the ISP is developing to expand coverage and authorize the Sinovac vaccine after three years.

Today, the vaccination campaign has a minimum age of six years and already has 2,159,556 minors under 18 years of age with their complete scheme, which represents 70.9% of the target population. Of these, 874,580 are boys and girls between the ages of six and 11.

According to the director (S) of the Institute of Public Health, Heriberto García, there is already a report that includes the adverse events of the Sinovac vaccine from almost 100 million doses that have been administered in China to children of three to 17 years.

According to García, “3,890 cases of adverse reactions have been reported, mostly mild, with only 93 of them being serious. They are very good results ”.

The authority adds that “Everything we have reviewed so far indicates that it is possible to do the age extension in the use of this vaccine. What remains is to review in detail some data from the report and also progress of the study being carried out by the Catholic University in the pediatric population ”.

In the analysis carried out, it favored (more than Pfizer, for example), the fact that the Chinese vaccine uses a known mechanism and there is data on its use both in the Asian country and in Chile, which, as detailed, gives the experts more certainty regarding the incidence of adverse reactions.

If authorization is obtained next week, as projected, before the end of the year, the inoculation of this group, which is around 600 thousand boys and girls, could begin. This, in addition, would leave only the zero to three-year-old segment without immunization, considerably expanding the target population likely to be vaccinated.

“In the initial emergency approval that was made, it was decided to leave the approval for children between three and six years old pending until more information is available, but it is most likely that this is a safe vaccine for younger children,” says Carlos Pérez, Dean of the Faculty of Medicine and Sciences of the U. San Sebastián and infectologist of the U. de los Andes Clinic.

The professional adds that, for approval, the important thing is that the number of children who have been studied is sufficient to establish that the vaccine in that age range is safe and effective. “If that is true, there is no problem in expanding the age range”, It closes.

See also  Is a booster vaccine for everyone necessary? 'Effect of injection is decreasing, but still protects well against serious disease'

Among the justifications to move towards approval, from the ISP García points out that a three-year-old child has more social activity or goes to kindergarten, for example, and that increases his possibility of being infected. “Maybe he won’t get sick, or he may have a slight fever, but you can pass the virus to your mom, who, in turn, will infect others, so the circle does not end. That is why it is relevant to be able to carry vaccination to this group ”, he assures.

Miguel O’Ryan, infectologist at the University of Chile, points out that “to the extent that clinical studies support it, this is a strategy that will advance sooner or later, although the virus seems clearly less relevant, due to frequency and severity, than in adults and even older children ”.

But Sinovac is not the only thing. Thursday of last week, the American Pfizer submitted to the ISP the request to extend the age of use of its vaccine from five years. Currently, this formula is supplied in Chile from 12.

In this case, yes, compared to Sinovac, more analysis time is required, since, as explained by the ISP, the formulation has a new mechanism of action, the dose is lower and it comes in another presentation, which also implies a review of the results of clinical studies, as well as analysis of quality and manufacturing controls. For this reason, the institute is permanently monitoring its use in the United States, where it has been authorized since the age of five.