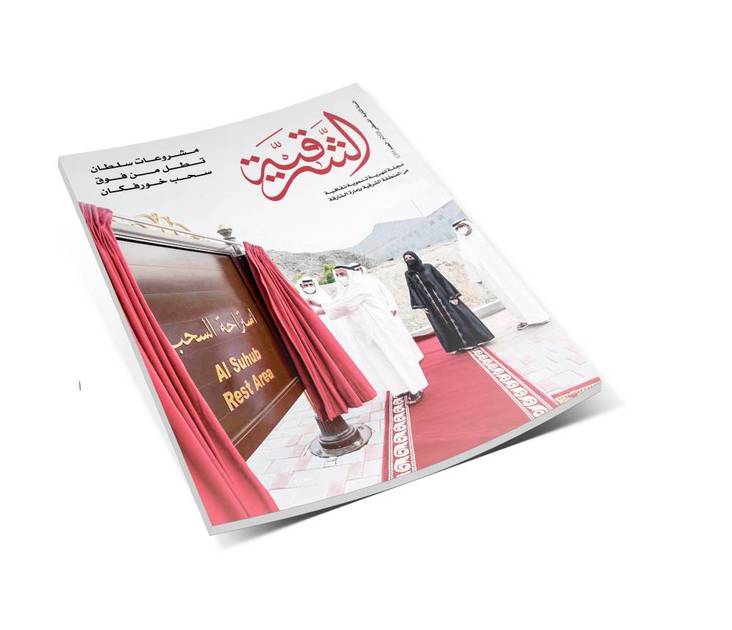 The “Sharjah Culture” issue 23 of “Al Sharqiah” magazine and “Al Wusta” magazine, for the month of August 2021, was issued. The two issues included topics that shed light on the merits of the development scene in the central and eastern regions, drawing a closer picture of the development, cultural and tourism movement represented in the various projects that implemented by Sharjah.

The “Al Sharqiya” included interesting materials that covered all developmental, cultural, heritage and tourism fields in the Eastern Region. One of the most important tourism development projects that Khorfakkan recently witnessed, and the project is one of the aesthetic development lessons offered by Sharjah through the vision of His Highness Sheikh Dr. Sultan bin Muhammad Al Qasimi, Supreme Council Member and Ruler of Sharjah. As for the section “The Path of the Summit”, it included a dialogue with Fadhil Busaim, director of the “Sharjah Book” branch in the Eastern Province, to learn about the stages of his professional and humanitarian career and his relationship to the book. ancient, and how people lived at that time. He tells a lot about the customs of the people of the region in the past, and in “Meydan” a tour of the Dibba Al-Hisn Cultural and Sports Club and its strategy for developing the club’s performance and doubling its achievements, and in “Under the Light” we stop with the “Khorfakkan Youth Center”, and its various programs aimed at creating generations of talented youth In various fields, who are able to face challenges and participate in building the future and advancing their country.

In “You’re welcome,” the issue included a topic about Lake Kalba, which opened in 2006, and has become a distinctive sign in the city, in terms of its location and its environmental and aesthetic components. It has become a landmark that reflects the splendor of nature, and a tourist attraction.

It also included a bundle of development, social and cultural news, and monitored various activities on the eastern coast of Sharjah, in addition to a number of articles and articles for the magazine’s writers.

The “Wusta” also included a range of interesting topics of interest to the people of the central region. In the “Enjaz” section, it shed light on the Al Shamal pasture project in Al Dhaid, which His Highness the Ruler of Sharjah inaugurated in November 2020, the first phase of it, which is the first natural pastures that the Sharjah government intends To be completed in all the cities and regions of the emirate, which are 13 pastures. This file contains a variety of interesting cultural information about the natural pastures known to the central region in the past, and the types of plants that contained them.

As for “The Path of the Summit”, there is a dialogue with Dr. Maryam Saeed Al-Ajid Al-Ketbi, daughter of Maliha, and a talk about her accomplishments and her career and life, which were honored with achievements and awards. In “Authentic Features”, there is a dialogue with Saif Obaid Al Tunaiji, who talks about the fragrance of the past and the original values ​​that prevailed in the Badia and Saharan societies. “Under the Light” also documents the traditions of the Al-Maqiq for which the region is famous. The issue also includes various news related to the region, stops and opinion articles, and exclusive reports and coverage that come closer to the diaries of the people of the region and their vibrant memories with the land.