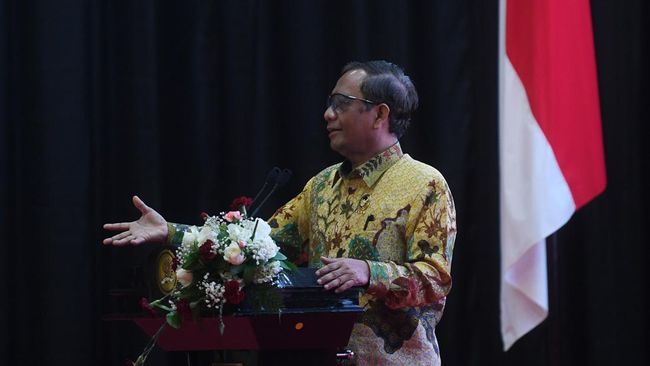 Coordinating Minister for Political, Legal and Security Affairs (Menko Polhukam) Mahfud MD calling it unlawful to establish a country like in the times Nabi Muhammad SAW.

“We cannot and are prohibited from forming a state like the one formed by the prophet, no. It’s illegal,” said Mahfud during a Tarawih Lecture with the theme ‘Nationalist-Islamic and Nationalist-Secular Meeting Point in National and State Life’ at the UGM Mosque, Sleman, Sunday (3/4).

Mahfud initially explained the formation of a religion from an Islamic perspective or its fiqh construction. He said establishing a state was a religious teaching.

“For what, the prophet used to create a country,” he said.

The second argument, according to Mahfud, is that the state is needed so that people can have a good religion. The argument in question is It is not obligatory except for the obligatory understanding.

Therefore, continued Mahfud, the previous scholars made a fatwa to continue to fight for independence in order to achieve freedom and religious perfection. Starting from worship, pilgrimage, and other rights.

“Then what is the country like? If in the hadith ‘I leave two things with you which when you hold it you will not go astray, namely the Quran and Sunnah’, the hadith. This means that because the prophet formed a country, we must also form a religion, that is the teaching of the prophet,” he added. .

It’s just that, said Mahfud, forming a state like what the prophet did is no longer relevant.

“Because the state that was formed by the prophet, the source of the law is God and the prophet. If there is anything the law comes down from God, there is an incident that the prophet decides this is the law. Now there are no more prophets. Therefore, the system that is being formed cannot be like prophet,” explained Mahfud.

“If there are new things, for example the problem of human trafficking, terrorism issues, ITE, it didn’t exist before. Now if someone does it, ask the prophet, there is no prophet, God, God doesn’t reduced another revelation. Who is it, then? Form the state system according to our needs,” he continued.

According to Mahfud, none of the 67 countries with a majority Muslim population use a prophetic state administration system. For example, Egypt or Morocco with presidential systems, Malaysia and Pakistan use parliamentary systems, then the emirates of the United Arab Emirates and the absolute monarchy system of the Kingdom of Saudi Arabia.

“And Indonesia is also a country which is the largest Muslim majority to form the name of the Unitary State of the Republic of Indonesia based on Pancasila as well as based on the ijtihad of the scholars,” added Mahfud.

Becoming an Islamic country, said Mahfud, is not something Indonesia is aiming for. Instead, it becomes an Islamic state or a country that applies the values ​​of Islamic teachings.

“That’s why I say Indonesia is not an Islamic country, but an Islamic country. Islam is an adjective, not a name. So that Islamic traits grow here, through culture, through wayang. Lebaran is Islam, but there is no Eid in the teachings Islam does not exist, it is culture, it was created by Sunan Bonang but it is a culture now, because we are building an Islamic culture, which is in accordance with the needs of Indonesian culture,” he concluded.