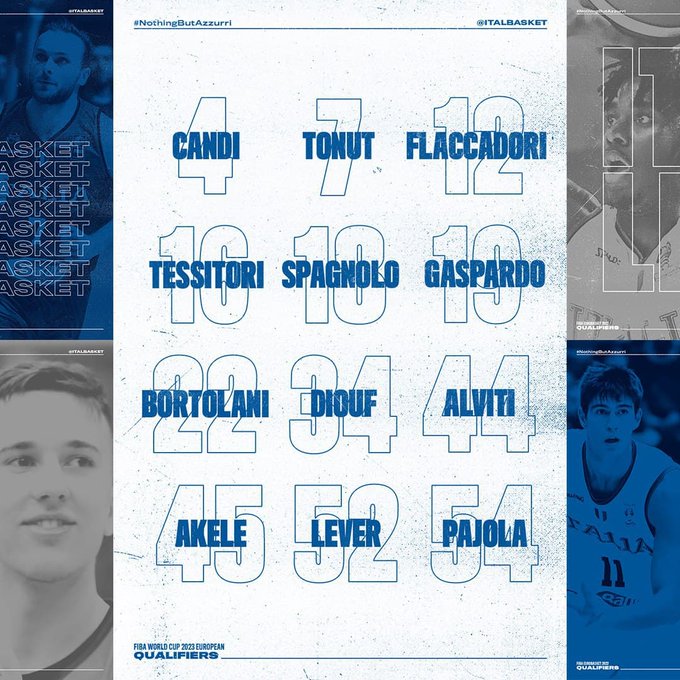 A few days before the debut in qualifying for the FIBA ​​World Cup 2023, the coach Meo Sacchetti has chosen the 12 who will face Russia in St. Petersburg on Friday 26 November at 17.00 Italian time (19.00 local time).

Michele Vitali will be part of the expedition to Russia but will not be available for the match against the hosts. Bruno Mascolo, Gabriele Procida and Mattia Udom will not travel with the team but will re-join the group on Saturday 27 November in Milan.

“We can’t wait to resume the journey – said the coach Meo Sacchetti – and our desire is to start this long journey with a victory against Russia also because from Friday onwards every match will be decisive on the way to the World Cup. We are a team with many young people, many of whom, however, already have some international experience. As always we will give our best “.

The team will fly the same day to St. Petersburg and tomorrow will have a double training session at the Yubileyniy Sport Complex, where they will face the hosts on Friday 26 November. Immediately after the match, the return to Italy to prepare for the match against the Netherlands at the Mediolanum Forum in Assago on Monday 29 November, at 20.30.

For i FIP members There is a promotion for the purchase of a reduced-price ticket. For reservations and information, the email to contact is HYPERLINK “mailto: [email protected]” [email protected] .

Requests must be received through the FIP affiliated companies and not from individual members. The deadline for reservations is November 23rd.

The Azzurri for Russia

Following return to Italy in Milan

The schedule of group H

In the first phase, the 32 participating teams were divided into 8 groups of four teams each competing in an Italian round with home and away matches along three “windows”. Only the first three teams in the standings qualify for the second phase, forming a further six-party group with the first three qualified teams of the matched group, taking with them the points scored with the other teams that have passed the round. In the second round, only the teams that did not clash in the first phase face each other in home and away matches. Only the top three in the second round qualify for the World Cup. The Italy group will cross with group G, the one made up of Spain, Georgia, North Macedonia and Ukraine.

I 1️⃣2️⃣ for Russia!

Coach Meo Sacchetti chose the Azzurri for the match on Friday 26 November vs 🇷🇺 in St. Petersburg! 💙#Italbasket#FIBAWC pic.twitter.com/HfAAaYxYiT