In the midst of a lack of confidence after the strict measures adopted for more than two months, Italy will start a reopening plan starting next week, which includes airports, gyms, sports centers and swimming pools, among others.

Paola De Mucheli, Minister of Transportation, announced that all the country’s airports will open from June 3. “All airports will be opened as of June 3, when travel between Italian and international regions will be authorized,” he said in a speech in parliament.

The Italian government announced last weekend the opening from June 3 of its borders to tourists from the countries of the European Union (EU) and the suspension of the mandatory quarantine for foreigners entering the peninsula .

First country in Europe affected by the coronavirus epidemic, Italy had ordered the closure, with a ministerial decree of March 12, of several airports, including Linate, in Milan. Others were able to operate, but in a limited way, such as that of Rome (Fiumicino), Milan (Malpensa), Bologna, Palermo and Turin.

The second airports in Rome, Ciampino and Florence, Peretola, were closed on March 13, and were able to open on May 4. The Italian airline Alitalia, which will be nationalized due to its economic difficulties, announced that it will multiply its flights in June, with a 36% increase in its connections compared to May. As of June 2, meanwhile, the company will gradually resume its flights between Rome and New York, with Spain, and between Milan and southern Italy.

“Come spend your holidays in Italy,” urged Foreign Minister Luigi Di Maio in an interview with the German press on Wednesday.

The Government further announced that From May 25 they will open gyms, sports centers and swimming pools and on June 15 you can go to the theater or the cinema.

Days ago the Prime Minister Giuseppe Conte He had expressed his satisfaction with the “encouraging” data on the evolution of the pandemic in the country. The president indicated that the nation is facing the reopening phase “wanting to start again but with caution.”

Since May 18, Italy is “phase two”. This implies that from that day on, people should not justify to the police the displacements carried out within the region itself. If by June 3 the data “remains encouraging”, Italians will also be able to travel to other areas of the country. 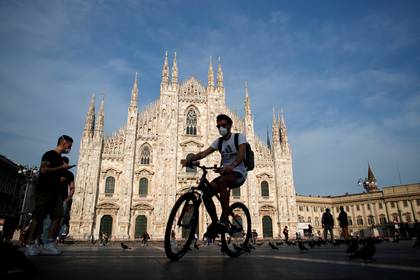 Since last Monday, also, people can visit friends and family, as long as they do not create crowds. Religious events can be held and some museums have opened, as well as small businesses such as clothing or barber shops, beauty centers and restaurants.

Italy recorded in the last 24 hours 161 dead, a figure almost identical to yesterday, after they fell below a hundred on Monday, and the total number of deaths now stands at 32,330, according to the latest official data from Civil Protection. The total cases of contagion since the beginning of the emergency on February 21 in Italy are 227,364, with 665 in the last 24 hours (about half in Lombardy), a figure lower than that of Tuesday.

Coronavirus, live: the advance of the pandemic and the search for a treatment

Coronavirus: Germany is reopening and learning a hard lesson

VIRTUAL EDUCATION – ‘It was just too much’: How distance learning is driving parents to a breaking point

In the...
Read more
Archynewsyarchynewsy.com