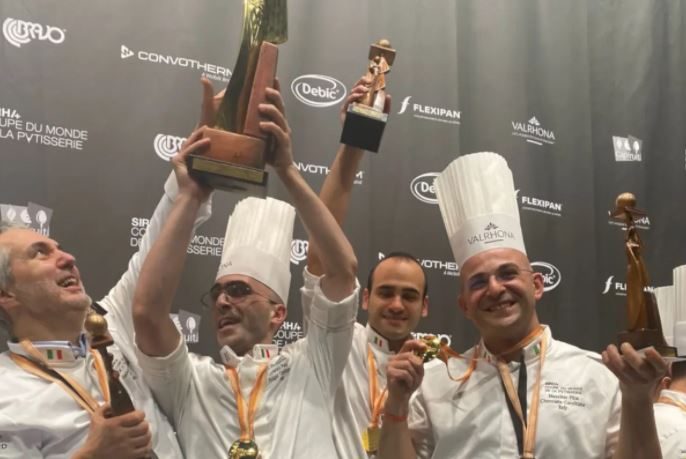 The Italian team of pastry chefs won La Coupe du Monde de la Pâtisserie 2021, the world stage that saw the 11 nations that reached the final compete in Lyon. The “blue team” was made up of Andrea Restuccia, Massimo Pica and Lorenzo Puca.

After the triumphs at the Tokyo Olympics, the European football, volleyball and cycling championships, Italy has another success, although this time not in a sport. Our team of pastry chefs has in fact won La Coupe du Monde de la Pâtisserie 2021, the world stage that saw the 11 nations that reached the final compete in Lyon. The “blue team” was made up of Andrea Restuccia, Massimo Pica and Lorenzo Puca, while the coach was the president of Club Italia Alessandro Dalmasso. Behind us were Japan and France, while the important sustainability award was won by Switzerland. It was the twelfth time that Italy participated in the competition and the victories before yesterday’s had been two.

Our three chefs – a sugar designer, a pastry chef and a chocolatier – in ten hours managed to create a chocolate dessert to share, a restaurant dessert – a category introduced this year as a novelty and judged by chefs of the caliber of Dominique Crenn and Jordi Roca -, an ice cream cake, a 165 cm tall sugar sculpture and another in chocolate, delicacies that managed to convince the jury. Andrea Restuccia, Massimo Pica and Lorenzo Puca had been preparing for weeks with daily training under the watchful eye of the “coach” Alessandro Dalmasso, who commented on the eve of the final: “We face this appointment with a great team spirit, at all levels ; these guys have dedicated a year and a half of their life to preparing for the final, and today more than ever our whole sector is united to cheer for them. Without divisions, transversely: it is something very important that makes us proud “.

Angelo Musolino, president of Conpait (Confederation of Italian Confectioners) commented on the victory: “Precision, concentration and imagination have allowed the tricolor pastrychefs to win the prestigious prize in Lyon with works of art dedicated to nature. We are proud of Lorenzo Puca, Massimo Pica and Andrea Restuccia who have won the pastry world championship. also luck and we are convinced that the work of recent times is making the whole sector grow dramatically. The victory in France fills us with happiness, long live Italian pastry, long live the young pastry chefs of our territory “.