Jake Paul was seen out for the first time since the FBI raided his home last week, as he walked his dog with his ex-girlfriend Tana Mongeau in Calabasas, California.

The 23-year-old YouTube personality donned a brown T-shirt with khaki shorts and beige Nike trainers, wearing a large face mask on the outing.

Mongeau, 22, kept warm in an oversize white sweatshirt with black and white trainers on the walk, with her blonde locks down and parted. 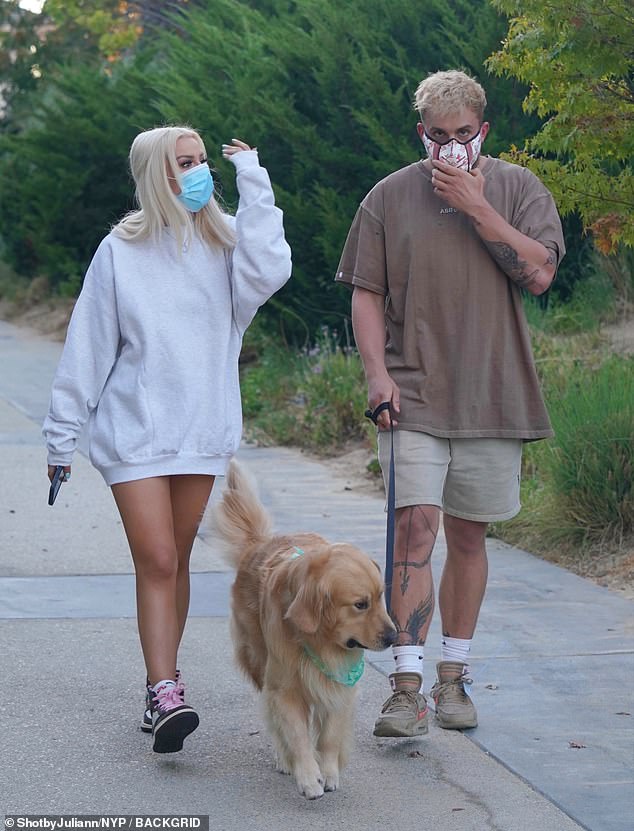 Out and about: Jake Paul, 23, was seen out for the first time since the FBI raided his home last week, as he walked his dog with his ex-girlfriend Tana Mongeau, 22, in Calabasas, California on Wednesday

The Las Vegas-born beauty, who parted ways romantically with Paul earlier this year, donned a standard medical face mask on the outdoor trek.

Jake, who’s the younger brother of fellow social media star Logan Paul, made his first public appearance weeks after FBI and SWAT executed a search warrant at his $6.9 million Calabasas home in an August 5 raid in which they retrieved multiple firearms off the premises.

In a clip obtained by TMZ, Paul said he wanted ‘to clarify things and set things straight’ in regards to the incident.

‘The FBI raid is entirely related to the Arizona looting situation that had happened, and it is an investigation,’ the influencer said. ‘There are rumors of it having to with so many other things that have nothing to do with me or my character, and the s*** that people are making up is absolutely absurd. 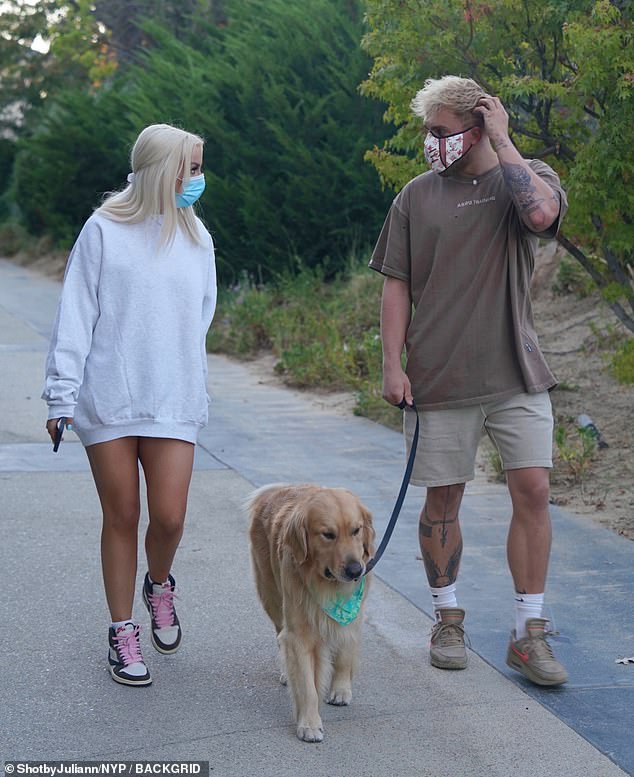 Details: Insiders close to Paul told DailyMail.com that the raid was focused on gathering evidence of looting this past May at a riot at the Fashion Square Mall in Scottsdale, Arizona 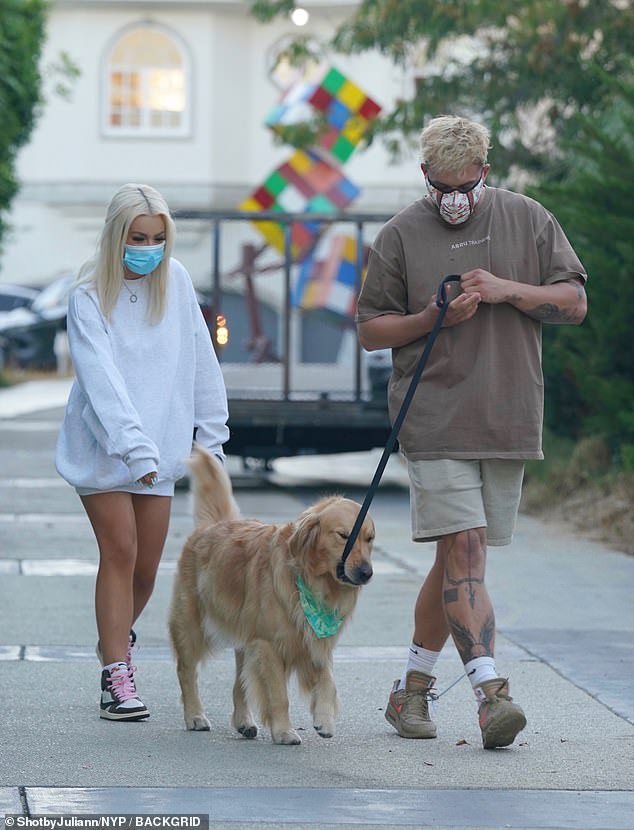 Paul alluded to a problematic member of his inner circle in the statement.

‘With that being said when I become aware of someone around me who is doing malicious things, they are immediately cut out of my life – I don’t put up with bulls***, I don’t surround myself with bad people, and if someone does something bad they will be removed from my life.’

Paul said he was focusing on music and boxing in the meantime.

Insiders close to Paul told DailyMail.com that the raid was focused on gathering evidence of looting this past May at a riot at the Fashion Square Mall in Scottsdale, Arizona.

The source also revealed that police searched other properties beyond the two mansions in the coordinated raid – though the FBI remained tight-lipped saying the case had been sealed. 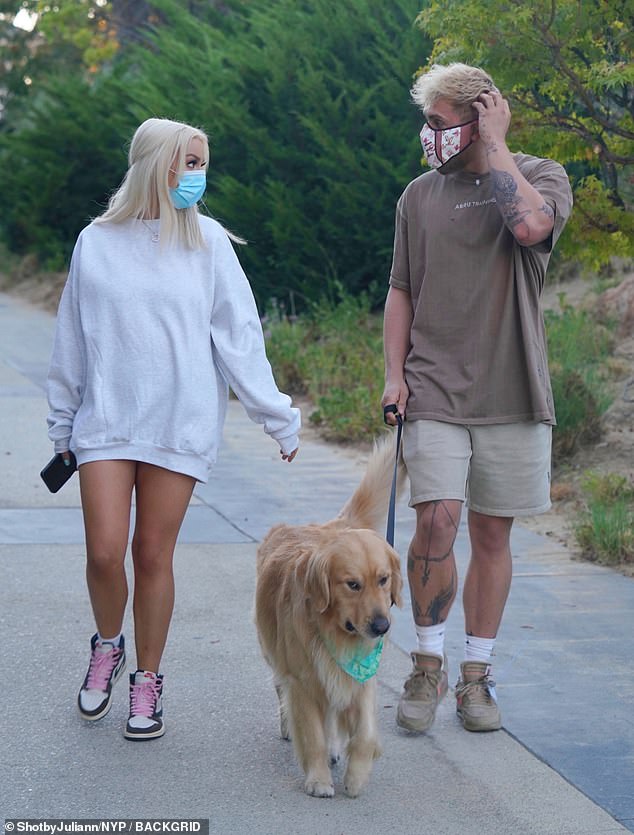 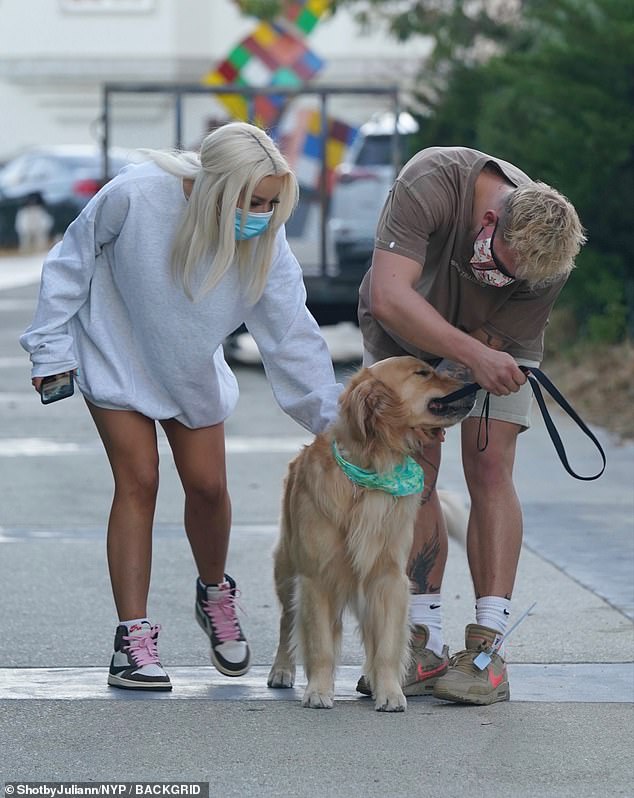 Casual: The YouTube personality donned a brown T-shirt with khaki shorts and beige Nike trainers, wearing a large face mask on the outing

Paul, 23, Izadi, 35, and a third YouTuber filmed themselves at a Scottsdale protest over the killing of George Floyd. They were arrested and charged with trespassing and unlawful assembly after looters ransacked and vandalized the Scottsdale Fashion Square mall.

As dozens of SWAT officers in armored vehicles hit the influencers’ mansions around 6 a.m., Scottsdale Police Department announced the Arizona state charges against the three men had been temporarily dismissed while the case was handed over to federal investigators.

‘It seems they wanted to get their hands on technology to review any footage that may not have been released,’ the source told DailyMail.com. ‘That is what seems to be out of control. Why is it so aggressive for just that? 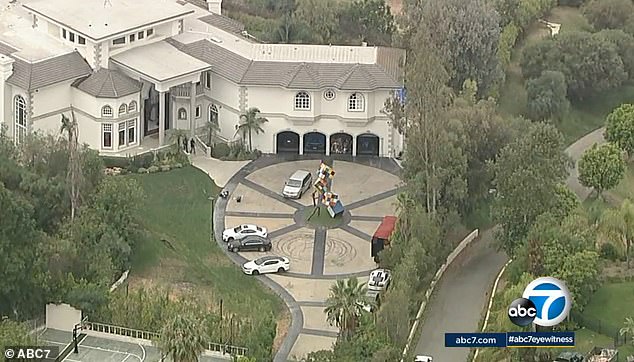 DailyMail.com can reveal that agents were looking for evidence of the Arizona mall looting he is linked to

Multiple high powered weapons were seized at the $6.9million Calabasas mansion during the raid for video information

‘It was a shock to everyone… You just don’t see that every day, these huge SWAT teams. Everybody there was detained while they secured the property.

‘They asked [Izadi] a lot of questions,’ the source added. ‘They were asking him things pertaining to why they were in Arizona. We don’t fully understand how misdemeanor trespassing charges turned into a federal investigation.’

News choppers caught on camera federal officers carrying several rifles confiscated from Paul’s mansion during the Calabasas search, setting social media ablaze with speculation over the reason for the raid.

Jake Paul was charged with two misdemeanor crimes after he was seen at an Arizona mall that was being looted in May. He was seen in video taken at the incident 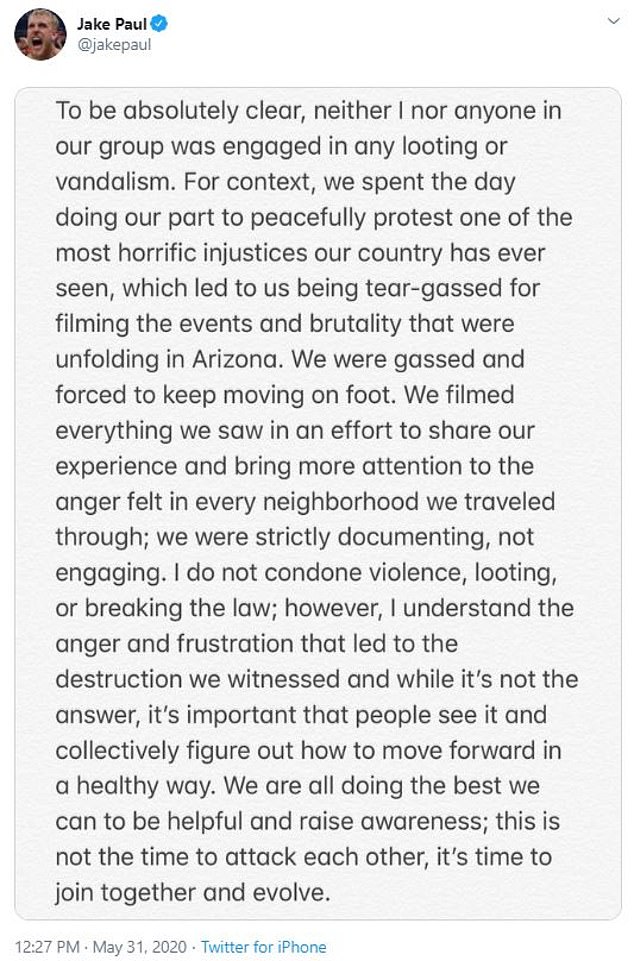 A spokesperson at the FBI’s Phoenix office confirmed the raids were connected to a federal investigation of the mall looting.

May 30: Looting at the Scottsdale Fashion Square mall, Arizona

May 31: Paul tried to distance himself from the situation in a statement, saying he was in no way involved in any looting or vandalism

August 5: Paul’s home in LA and Armani Izadi in Las Vegas are both raided by the FBI

Charges are dropped against both men by Scottsdale police; they remain the subjects of a federal investigation

Echoing a statement released by Paul in June, the source insisted they were not involved in any looting.

‘This is definitely being trumped up,’ the friend of the YouTube stars said. ‘It was never anyone’s intention to go down there and loot. I know that Mr. Izadi and Jake didn’t loot anything. It’s hard to say what was going on with all of the people around them.

‘There’s plenty of footage out there showing there were ignorant people around them that were encouraging bad behavior. There were people who they knew and didn’t know who were doing things that weren’t intelligent.

‘But of course the only names getting dragged into the media are Jake’s and Izadi’s. That’s always the position. Jake’s insanely famous and Mr. Izadi’s a good friend.’

The FBI said there were no arrests during the searches, and Paul’s lawyer, Richard Schonfeld, said he was out of California at the time.

‘They got here about 6 am this morning. We opened the gate to let them come in. They woke the staff with a couple of flash bangs which was pretty exciting,’ Richard Ochoa told the TV station.

Izadi later posted on, saying: ‘A lot of people talking trash. A lot of people making up things online today. I’m not going to get into any details other than all they wanted to know about was Arizona.’ 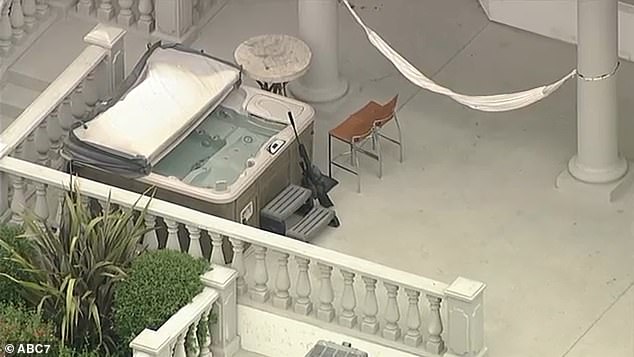 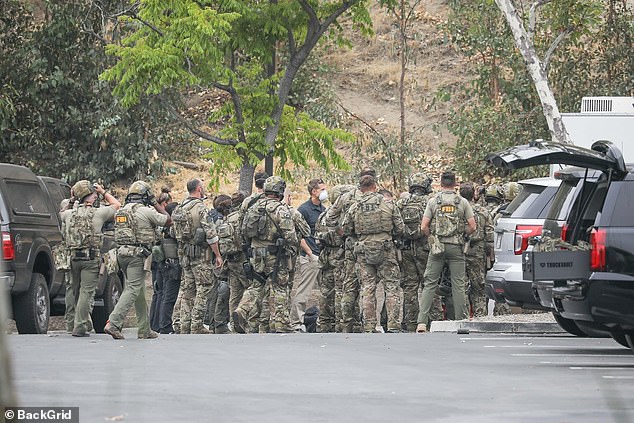 The FBI said no arrests were planned in the search. Sources say: ‘We don’t fully understand how misdemeanor trespassing charges turned into a federal investigation’ 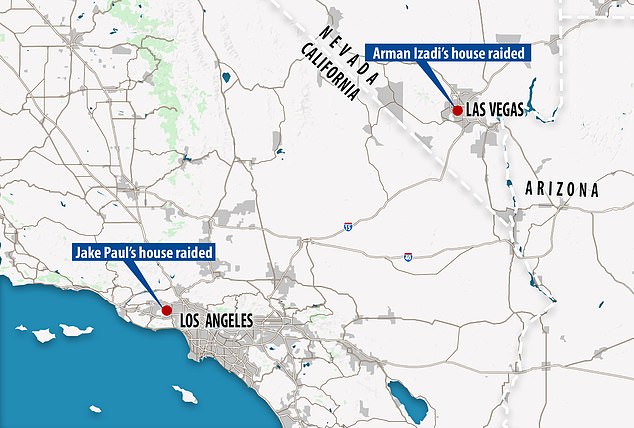 In a statement on Wednesday, the Phoenix FBI office said, ‘The FBI is investigating allegations of criminal acts surrounding the incident at Scottsdale Fashion Square in May 2020.

‘This morning the FBI executed federal search warrants in California and Las Vegas, Nevada in connection with this investigation. The search warrant affidavits are sealed and we are, therefore, prohibited from commenting further.’

Scottsdale Police said: ‘Misdemeanor charges for Jake Paul, Arman Izadi and Andrew Leon related to their involvement in the May 30, 2020 Scottsdale Fashion Square riots are being dismissed without prejudice today.

‘It is in the best interest of the community to dismiss misdemeanor charges without prejudice so that a federal criminal investigation can be completed. Scottsdale retains the option to refile charges depending on the outcome of the federal investigation.’

The rigged elections will maintain the dictatorship and impunity in Bolivia

Elections in Bolivia (EFE) Ten months after the resignation of Evo Morales, the dictatorship in Bolivia is intact and...
Read more

Gáldar puts out to tender the works of the new institute

Life before COVID-19 will not return until 2022, even with the first vaccines

By: Paul PadillaPhoto via: Twitter @MillosFCOficial At the age of 43, former soccer player Ricardo Ciciliano died after having relapsed...
Read more

"I couldn't sleep because I was impressed with that...
Read more
Entertainment

Coronavirus today in Venezuela: how many cases are registered as of September 20

Ashley Tisdale is pregnant! The “HSM” star is expecting her first child with Christopher French

Step aside Troy and Gabriella, This is the true...
Read more

They will give contracts to doctors and nurses; call for ‘Wellness Doctors’

Changes in the structure and function of the heart due to atherosclerosis Even in people...
Read more
Archynewsyarchynewsy.com