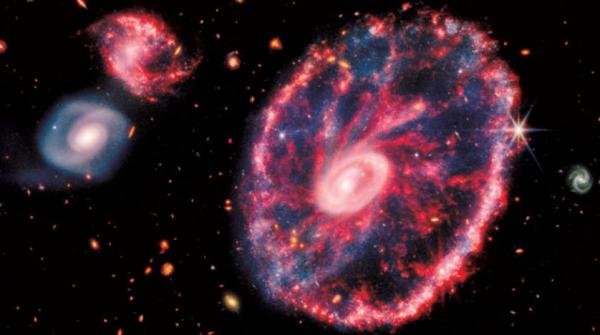 The US space agency “NASA” published, the day before yesterday (Tuesday), a rare and amazing image of a galaxy 500 million light-years away, the Cartwheel galaxy, whose rings appear in unprecedented clarity, thanks to the new “James Webb” space telescope.

Astronomers believe that the Cartwheel galaxy was originally a spiral galaxy, like the Milky Way, which includes the Earth, but a major event gave it its shape, which is the collision with another smaller galaxy (not shown in the picture). According to “Agence France Presse”.

This led to the formation of two rings from the main point of the collision, in the manner of circular ripples caused by throwing a pebble into the water, hence the name.

It was noted that the first, more moderate, ring is very bright, while the second, ie the outer, has been expanding since 440 million years ago. As it expands, the ring collides with surrounding gas, resulting in star formation.

This galaxy had previously been observed by the Hubble Space Telescope, but the infrared capabilities of James Webb revealed new details that were not visible before today, as it allows vision through a large amount of dust.

The composite image, taken from observations by two science telescope instruments, included two other small galaxies, as well as a number of other background galaxies.

And NASA explained in its statement that the Cart Wheel Galaxy is still in a “transitional” state. She added that the James Webb Telescope provides “insight into its current state,” as well as “what happened to it in the past, and how it will evolve in the future.”

See also  She takes a selfie but forgets to check the background, we all see the same thing

The James Webb Telescope, which cost 10 billion dollars, was sent into space about 7 months ago, and is currently stationed about 1.5 million kilometers from the planet.