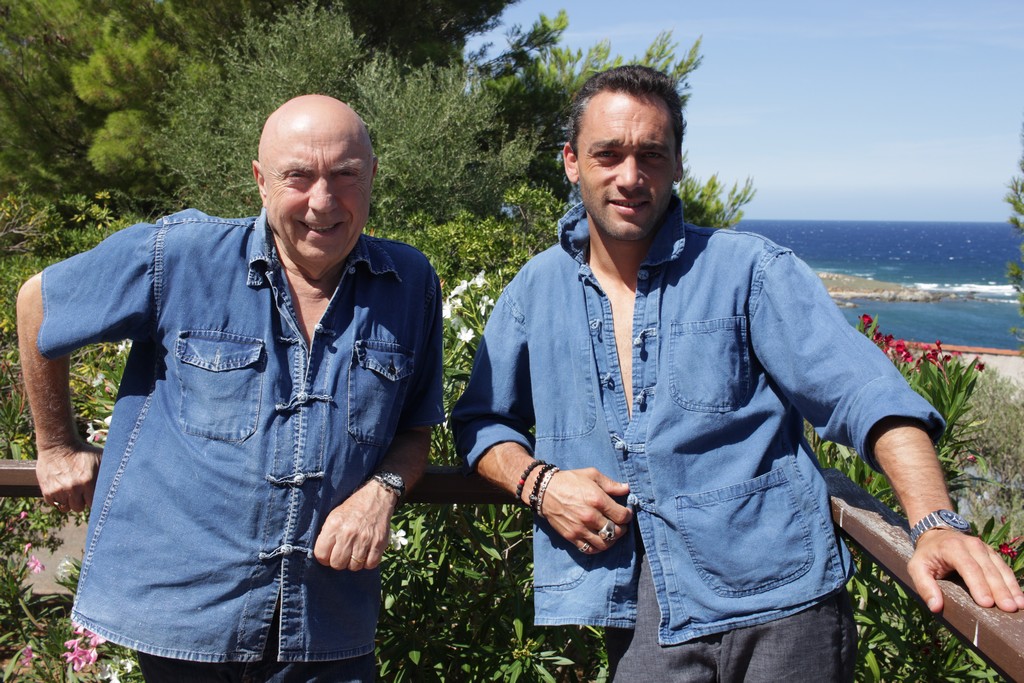 There are fairy tales that sometimes we cannot imagine, even in dreams.
However, the present-Jean-Baptiste Guegan is indeed real. A fairy tale for the boy with the voice of Johnny Hallyday, who is born of an encounter, however unlikely, between him and Michel Mallory, record-holder of songs written for the idol that has come to an end on 5 December in the evening at Marnes-la-Coquette.
It is in the residence of Michel Mallory, of the Navy of Davia, where Johnny had his habits, as we found the two men.

11 o’clock in the morning, Michel Mallory is there with his wife Nathalie for welcoming us so warmly as they know how to do.
In a corner of the patio, Jean-Baptiste Guegan is there, cell-phone glued to the ear to respond to a journalist requesting an interview.
A detail-dress hits at Jean-Baptiste; he is wearing a blue chinese like Michel who, in fact, we know his trademark.
Michel Mallory takes advantage of this moment to tell us how this story between him and Jean-Baptiste was born.

“In fact, it is necessary to go back to the time of the tour of the old scoundrels. We were several, including David Hallyday and Eddy Mitchel when Johnny told me that he wanted to record one final album in Nashville, and by adding “like that the circle will be complete and this album will be with you”.He wanted to go every two to Nashville, to really make the music he wanted to do. He wanted to finish it. The departure was planned in December
This announcement has cast a cold and yet it was serious. So I started to write a few titles, but unfortunately, his desire could not be carried out”.

And to continue.“Then, through a friend of Nathalie (his wife) we started to talk to me about Jean-Baptiste Guegan and insisted that I meet them. Quite frankly, I didn’t want to. I thought I had to do another look-alike, like so many others, the Taulier.
To make it short, I would say that then I have listened to on the social networks and by closing my eyes, I had the impression to hear Johnny. It was huge.
I finally agreed to take the phone to his producer to which I said that I was in Corsica, and that if he wanted to meet me, he had to vienna. And there, everything went very quickly.
With Jean-Baptiste and his producer, we were invited by José Oriano on his boat-drink to enjoy pasta with the spider crab. On the boat, there was a pa system and a microphone. Jean-Baptiste got hold of and started to sing “Oh Mary”. I burst into tears, and I immediately realized that we had not dealing with an imitator, nothing to see.

I then explained to the producer that I had already written several songs for the album Johnny and that some one could take them back to Jean-Baptiste, other the remove and that we could also keep it but by changing the words. This song is the one written for Johnny so that he thanked his audience.
This song” To say thank you” was destined to Johnny for that he thanked his audience. Today, it is suitable for Jean-Baptiste, who sings to thank his idol as always.
This trip to Nashville was just giant.

‘”As it is written” will be released under pressure on August 30, instead of the month of October It is just fabulous.
I got to know Jean-Baptiste, to discuss with him and I am struck by its course that in a lot of points, especially in childhood and adolescence is the same, see worse than that of Johnny.
By making knowledge of Jean-Baptiste Guegan, who I met first an artist, a real one, with his sensitivity. If Johnny had not existed , BR would have still sung” .

Before leaving, Michael tells a little anecdote:” One day Jean-Baptiste went and consulted an ENT. The latter said to him, “it’s funny you have the same vocal cords as one of my patients very well known” Curious Jean-Baptiste wanted to know more and the practitioner revealed to him that it was our Johnny”.

“Even in my wildest dreams I could not have imagined this will happen to me”
Jean-Baptiste Guegan has a physical play-boy and as an actor, nothing to do with Johnny Hallyday.
On the other hand, when it is a approach, and you speak, the intonations are the likeness voice with Johnny is there and well there.A little later, when Michel Mallory we will listen to the two title, then there’s the hair ruffle, the creeps takes you and the emotion you goes to the body.

Smiling, casual, Jean-Baptiste Guegan takes over from Michel
“What happens to me, not even in my wildest dreams I could have imagine.
Today, however, it is the reality. The album is just monstrous. I really look forward to the 30th August to see the baby coming out.

As Michel said, the album is already gold record while it is still in pre-sale. This is fabulous. It is also a pride for me to continue in my own way the work of the one who has been and always will be my idol.

If by my contribution I can put a little balm to the heart to the many fans of our rocker, I would be the happiest.

I am both proud and happy to see that people follow me and as the rooms fill up each of my services, whether in France, Belgium or Switzerland. I also have the tour of the 40 Zenith in France, which is going very well.

Johnny was everything to me. Child, he saved my life, without knowing it, each time it has helped me to climb back up the slope. He was there to heal my wounds in my childhood complicated”.

When we ask the question to Jean-Baptiste know if he had already had the opportunity to meet his idol, Jean-Baptiste replied with great modesty:

“No, one day, I met Pierre Billon on the tour of the French games, which was proposed to me to make the podium and who had liked my performance, before adding that he would talk to me Johnny. Later he told me that Johnny had listened and he would have said that I was “far more near”. This meeting that I hoped if she was not made to it is that it should not be done. I believe in destiny, but I don’t like the force. Today the success is there, but I keep my feet on the ground. What I want is to get back very quickly to the work, and prepare for a second album. No question to stay there.

Before leaving, Jean-Baptiste is full of praise with regard to Michel Mallory and says that he is thrilled to return to Corsica for the 3rd time, but certainly not the last.

At 36 years of age, Jean-Baptiste has all the future in front of him.