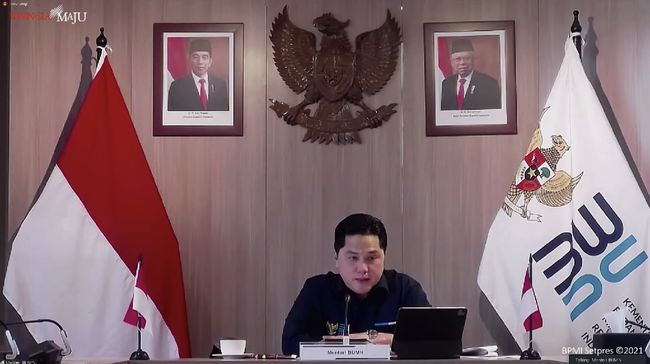 Jakarta, CNBC Indonesia – Minister of State-Owned Enterprises (BUMN) Erick Thohir said there were many games going on in the domestic sugar industry. This is one of the reasons why Indonesia is still very dependent on imports to meet its consumption sugar needs.

He said that one of the efforts made by the Ministry of SOEs was to encourage the establishment of SugarCo under the state-owned plantation holding, PT Perkebunan Nusantara (Persero) III/PTPN III.

“Well, these things will also be followed later by focusing on SugarCo, sugar which we have been importing for consumption. There are even games here and there,” said Erick in a virtual webinar, Tuesday (28/9/2021). .

Refocusing The business carried out by PTPN is also part of a comprehensive business restructuring, after previously being merged into one company under the holding.

In addition to the sugar business, said Erick, PTPN’s business will also be focused on palm oil commodities, especially in the current high price conditions which are considered to contribute to good performance for the company.

“Refocusing products on palm oil is one of them, and of course this is also a good price for palm oil, finally with restructuring,” he added.

As for SugarCo, it is a separate entity (spin off) PTPN’s sugar production business by forming a new company named PT Sinergi Gula Nusantara (SGN).

The company is targeted to get investors from the same line of business this year with an investment value of Rp 23 trillion. PTPN’s stake in SugarCo is 51%, while the other 49% will be owned by investors.

Later, SugarCo will have 35 sugar factories spread across Indonesia. The entire factory will be obtained from the 7 PTPNs that currently own sugar factories.

For this investment, the company targets to immediately get offers from new investors by the end of this year, for a sugar producer company owned by PTPN holding, Sinergi Gula Nusantara (SGN) or SugarCo. The company plans to release 49% ownership of this sugar factory.

The due diligence process is currently underway with potential investors. At the same time, the process of calculating the company’s valuation is also underway.

“It’s due diligence, they are [calon investor] will send a team soon. Before the 12th month, submit the offer,” said Abdul Ghani in a Hearing Meeting (RDP) with Commission VI DPR RI, Monday (20/9/2021).

Given that PTPN is currently in debt or credit restructuring, the company also needs permission from creditors to release this asset. Abdul Ghani revealed that the divestment permit process from the lenders is currently underway.

PTPN already holds a non-disclosure agreement (NDA) from a number of potential investors who will invest in this new company.

The entry of new investors does not rule out the possibility of collaborating with the Indonesia Investment Authority (INA).

Abdul Ghani said the presence of these investors was needed because the company is no longer able to invest with bank loans, in the context of the ongoing restructuring program.

Meanwhile, the need to revamp five sugar factories and revitalize one factory is needed with funds of no less than Rp 23 trillion.

According to the company, currently the sugar factory owned by PTPN has an asset value of Rp 17 trillion.