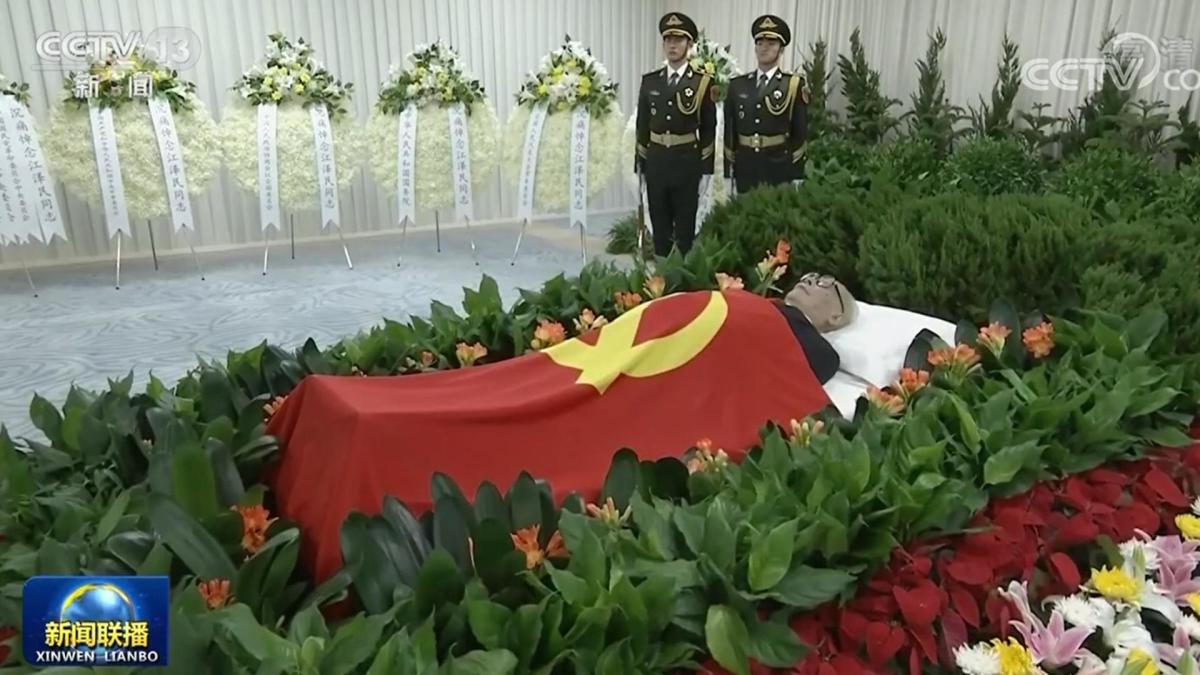 (Ling Media/Comprehensive Report) The body of Jiang Zemin, former general secretary of the Communist Party of China, was moved back to Beijing from Shanghai on the evening of the 1st. CCTV released footage showing that Jiang Zemin’s body inside the crystal coffin was wearing signature black-rimmed glasses. The specifications of Jiang Zemin’s funeral are compared with those of former leader Deng Xiaoping, but there will be no farewell ceremony for the body. The possibility of future burial in Beijing is extremely high.

Jiang Zemin’s body was escorted to the resting place, and according to the usual practice, it will be put in the People’s Liberation Army General Hospital (No. 301 Hospital). According to the “Comrade Jiang Zemin Funeral Committee” announcement, at 10 am on the 6th, the Party Central Committee, the Standing Committee of the National People’s Congress, the State Council, the National Committee of the Chinese People’s Political Consultative Conference, and the Central Military Commission held a memorial meeting for Comrade Jiang Zemin in the Great Hall of the People in Beijing. At that time, all Chinese citizens observed a three-minute silence. Sound the siren for 3 minutes wherever there is a siren, and sound the air defense siren for 3 minutes. But at the end of the announcement, it stated that there will be no farewell ceremony for Jiang Zemin’s body, nor did it explain how to deal with the body.

See also  The head of the anti-Covid task force in Israel: "The third dose of the vaccine also gives very high protection against contagion. Without it we would have been in lockdown for a month"

The failure to hold a farewell ceremony for Jiang Zemin’s body raised doubts. It was rumored on the Internet that Jiang Zemin had passed away before the official announcement of his death.

Seventeen days before China’s official media released the news of Jiang Zemin’s death on November 30, news of Jiang Zemin’s death was circulated. Qin Feng, the niece of former Chinese Foreign Minister Li Zhaoxing and Hong Kong Satellite TV reporter, posted on Weibo on November 13 that “the river is flowing eastward”. The river flows eastward,” but the post was subsequently deleted.

In the past, the arrangements after the death of the CCP leaders were not exactly the same. Mao Zedong’s remains were placed in the Chairman Mao Memorial Hall in Tiananmen Square, the ashes of Deng Xiaoping and former President Liu Shaoqi were scattered into the sea, former President Li Xiannian was buried in Babaoshan, former Central Committee Chairman Hua Guofeng, former State President Yang Shangkun was buried in his hometown.

Original URL of Ling Media: Jiang Zemin will not hold a farewell ceremony for his body, the probability of future burial in Beijing is high