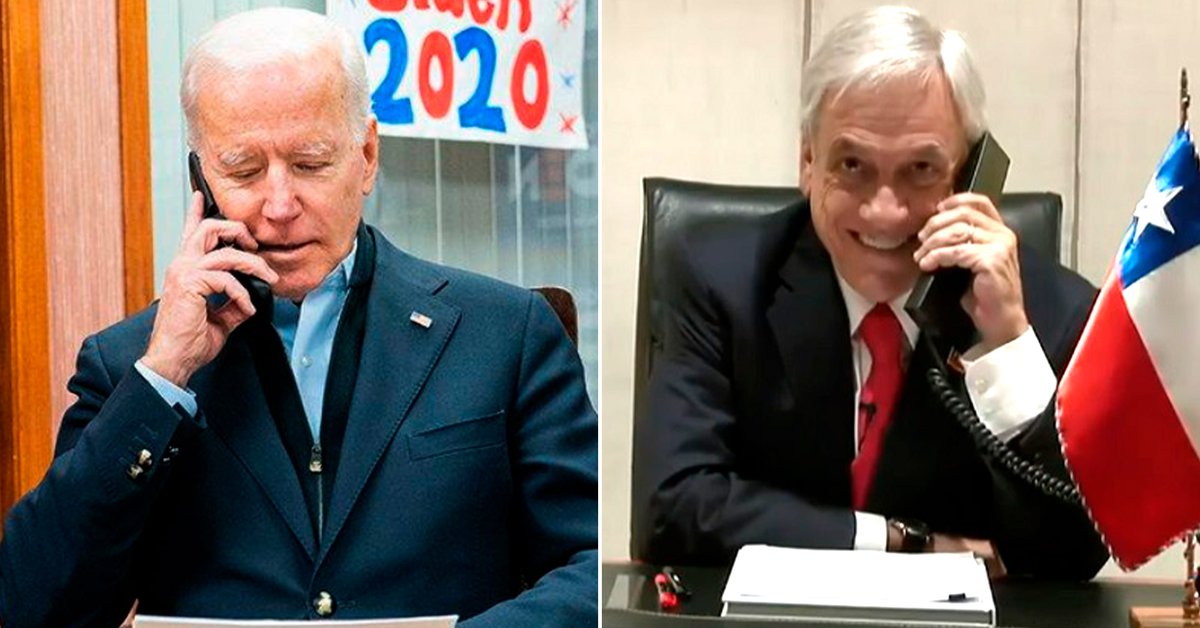 The president-elect of the United States, Joe Biden, spoke on Tuesday by phone with the Chilean president, Sebastián Piñera, and promised to help Latin America overcome the economic and health crisis caused by COVID-19. He also celebrated the decision of the Chilean people to draft a new Constitution.

Piñera is the first Latin American leader to have spoken with Biden by phone since his election was confirmed on November 7. Their conversation took place on the same day that the president-elect also spoke with the leaders of India, Israel and South Africa. Other heads of state who have already congratulated him are the French Emmanuel Macron, Canadian Justin Trudeau, the German Angela Merkel and the british Boris Johnson.

In his call with the Chilean president, Biden thanked him for his congratulations on his electoral victory “and expressed his deep desire to deepen the relationship of the United States with Chile “the president-elect’s office said in a statement.

The position contrasts with that of President Donald Trump, who continues to assure that the elections were fraudulent and that he is really the winner. Most of the Republican party has avoided recognizing Biden’s victory, indicating the need to await the completion of the lawsuits filed by the current president’s campaign.

A similar stance has been adopted by a number of heads of state, among them the Mexican Andrés Manuel López Obrador (AMLO), the Brazilian Jair Bolsonaro and the Russian Vladimir Putin.

IMMIGRATION AND CLIMATE CRISIS, PRIORITIES IN THE AMERICAS

“(Biden) congratulated President Piñera on Chile’s recent decision to update its Constitution in a way that will lead to a stronger and more equitable democracy.”notes the note. Chileans approved on October 25 by an overwhelming majority of more than 78% to repeal the Constitution inherited from the Augusto Pinochet dictatorship to draft a new Magna Carta after 30 years of democracy.

The statement of the transition team of the future Democratic president adds that, in the conversation with Piñera, Biden “also promised to work closely with Chile to help the Americas recover from the economic and public health challenges posed by the COVID-19 pandemic.”

The former US vice president, who will take office on January 20, also announced that he will work to “strengthen hemispheric institutions, manage regional migration and rebuild cooperation when it comes to facing global challenges, such as climate change.”

Biden said Tuesday that he has already spoken with 13 leaders from around the world, To those who are gradually returning the calls they made to congratulate him once the media projections confirmed his victory over the current president, Donald Trump.

“This is less about me than the circumstances. There is such a degree of enthusiasm and expectations (in the world) that we are going to have a hard time adjusting to it. But my main message is that the United States is back, and this is no longer ‘America alone’ “Biden said during a meeting with his foreign policy advisers and in a pun on the “America First” slogan used by Trump.

The first leader Biden spoke with on the phone was Canadian Prime Minister Justin Trudeau on the 9th. He has also been in contact with the leaders of France, Germany, the United Kingdom, Ireland, Japan, Australia and South Korea. as well as with Pope Francis.

With information from AFP and EFE

Want a sneak peek from President Biden? Take a look at their campaign

Joe Biden announced who will be his main advisers: “We are building a government that looks like the United States”