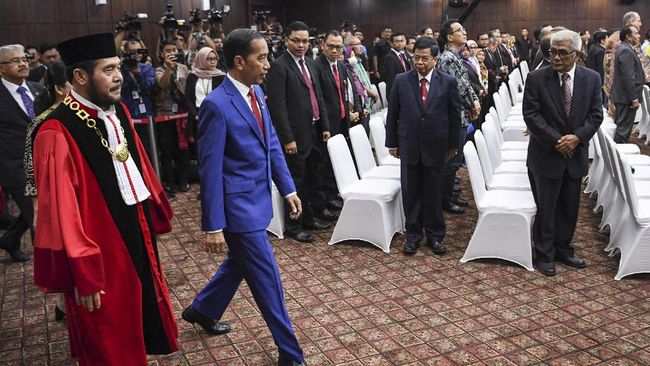 President Joko Widodo (Jokowi) will be the marriage guardian of his sister, Idayati, with the Chief Justice of the Constitutional Court (MK) Anwar Usman on May 26, 2022 in Solo, Central Java.

Head of the Banjarsari Religious Affairs Office (KUA) Arbain Basyar said Jokowi had been registered as the guardian of Idayati’s marriage to Anwar Usman.

“Later, he will be the one who will marry off (to become the guardian) himself,” said Arbain when met at his office, Thursday (19/5).

Arbain said Jokowi was legitimate to witness his sister’s wedding because Idayati’s father had died. According to Islamic law, if the father is absent, the guardian position can be replaced as grandfather.

“If grandfather is not present, the guardian is a sibling. The sibling of Mrs. Ida is Pak Jokowi,” he said.

“My witness has not checked. It should be an official,” he said.

Furthermore, KUA Banjarsari has currently prepared two Ijab Kabul texts for the bride and groom to read, namely in Javanese and Indonesian.

“Yesterday, I just asked for a text for the consent. I gave two, Indonesian and Javanese. Yes, I’ll prepare it. Later on, which one you want, Javanese or Indonesian, you just have to read it,” he said.

Furthermore, Arbain admitted that he had not received any information from the family regarding the dowry that Anwar Usman would give to Idayati. He is still emptying the part of the text of the consent form which should contain the amount of the dowry.