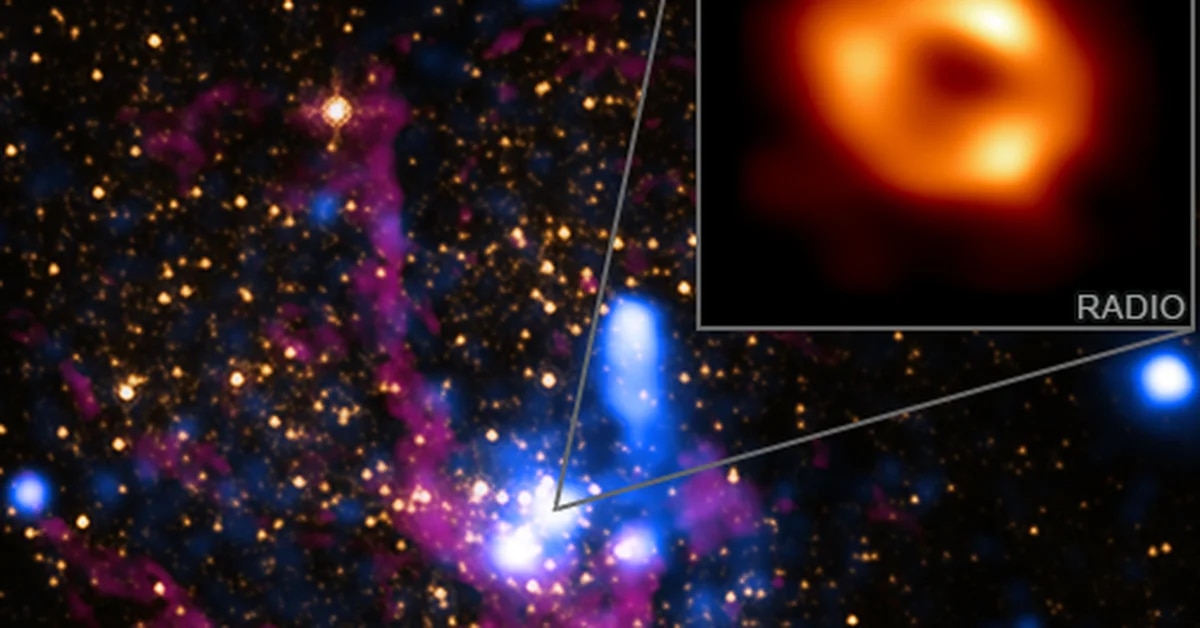 Astronomers believe that almost all galaxies, including our own, have gigantic black holes at their centers (Credit: NASA/CXC/A.Jubett/Chandra)

Last Thursday an image was released that marked the history of astronomy: the first photograph of supermassive black hole located in the center of our galaxy, the Milky Way, known as Sagittarius A*. As explained by the scientists European Astral Observatory (European Southern Observatory or ESO, according to its acronym in English)this achievement is proof that the same principles of physics operate at the heart of two systems of very different size, since a similar object exists in the distant galaxy M87which was portrayed in 2019.

Astronomers believe that almost all galaxies, including our own, have gigantic black holes at their centers, from which no matter or light can escape, making it extremely difficult to image them.. As the experts explained, gravity bends and twists light chaotically when it plunges into that abyss of superheated gas and dust that forms the black hole.

A 3D visualization of matter near a black hole, based on a computer simulation that incorporates the physics of flowing gas and the effects of magnetic fields and Einstein’s General Theory of Relativity. (Credit: Koushik Chatterjee, IHB, Harvard University/Chandra/NASA)

Black holes, meanwhile, are called stellar when they have a mass equivalent to three times that of the Sun, and they are classified as supermassive when their mass is equivalent to thousands, or even billions of Suns. In this case, Sagittarius A* (Sgr A*), named after being detected in the direction of the constellation Sagittarius, has a mass of about four million suns and is about 27,000 light years (9.5 trillion km) from the earth.

Black holes are large-mass, low-volume bodies in space that absorb any matter or energy located in their field of action, including light, which cannot escape their attractive force. With this action, these stellar objects it can not be observed and examined directly, although the matter that circulates around them can be detected before being engulfed.

The massive black hole is located at the center of the Milky Way galaxy (Photo: Twitter / @CIENCIA_UNAM)

“This image shows a bright ring surrounding the darkness, the telltale sign of the black hole’s shadow,” said Feryal Özel., the University of Arizona astronomer responsible for releasing this landmark image. “Light escaping from hot gas swirling around the black hole appears to us as a bright ring. Light that is too close to the black hole, close enough to be swallowed by it, eventually crosses its horizon, leaving behind only a dark void in the center.”, he added.

Its existence had been suspected since 1974 when an unusual radio source was detected in the center of the galaxy.. In the 1990s, several astrophysicists confirmed the presence of a supermassive compact object in that place, which earned them a Nobel Prize in Physics in 2020. The image that has been revealed this Thursday represents the first visual proof of that object.

This is what the black hole sounds like: This sonification (translation into sound) of the latest image of Sagittarius A* (Sgr A*) was done using a radar-like scan. Changes in volume represent differences in brightness, with material that is closer and moving faster corresponding to higher sound frequencies. (Credit: NASA/CXC/SAO/K.Arcand)

This historical photograph was obtained thanks to a project known as EHT (Event Horizon Telescope), which is made up of an international network of eight radio astronomical observatories, including one located in Sierra Nevada (Spain) and another in the Atacama desert (Chile). ). “We have two completely different types of galaxies and two very different masses of black holes, but when you examine their edges, those holes look remarkably similar.”, explained Sera Markoff, co-chair of the EHT scientific council, recalling the object identified in the galaxy M87.

In the words of scientists, this image was obtained after an observation that began in 2017. However, it was after five years of calculations and simulations carried out by more than 300 researchers from 80 institutes that this first image, since the black hole at the center of the Milky Way is small relative to other objects of similar size and because, in addition, there are clouds of dust and gases that extend over thousands of light years, which hide it.

Black hole and musical notes: Scientists managed to make a video in which infrared data is heard as low notes and dotted sounds. The brightest (and noisiest) region in the image is where Sgr A* resides (Credit: NASA/HST/STScI)

The two images that scientists now have, and their comparison, will allow the detailed study of the behavior of matter in extreme conditions, with plasma at “billions of degrees, powerful magnetic currents and matter that circulates at a speed close to light.” ” Professor Heino Falcke, former head of the EHT scientific council that produced the M87 image, explained to AFP.

The international collaboration project EHT (Event Horizon Telescope) is a system that created a virtual telescope the size of the Earth and that allowed the first supermassive black hole to be detected in 2019, in the galaxy M87, and which has now identified Sagittarius A*. It is a international collaboration, launched in 2015, bringing together 80 astronomy institutes.

It was about 300 researchers who had set themselves a challenging goal: to observe a black hole. An action that is, by definition, impossible; since no light can escape from it. The EHT got around the hurdle by detecting the cloud of very hot plasma swirling around the black hole before surpassing the Event Horizon, the place from which nothing can ever come out again, not even light, because of the strong gravity.

To accomplish these feats, astronomers had to overcome several obstacles. The cloud of matter surrounding black holes is only visible in a specific range of millimeter radio waves.and to be captured, a radio telescope is needed, a saucer-shaped antenna similar to the one used for satellite television, only much larger, since the sharpness of the instrument depends closely on the size, due to the gigantic instances and other obstacles.

In order to confirm his theory, scientists resorted to the principle of interferometryin which a network of antennas located in different parts of the planet observe the same sector of the sky at the same moment. Supercomputers combine the data obtained by the different radio telescopes, which allows obtaining an image as if it were obtained by a single antenna the size of the Earth.

The ESO team, made up of a team of 300 scientists from around the world, has today been able to demonstrate with images that Sagittarius A, 27,000 light-years away, exists (DAN WILKINS)

The EHT experiment took the exercise even further using interferometry but with an even larger basis (VLBI), i.e. forming a network of eight radio astronomical observatories that extend from Hawaii, in the Pacific, to Spain, passing through the United States; and from Greenland to the South Pole, passing through Mexico and Chile.

“The combined and synchronized data from the 8 observatories allowed us to build the image that we observe today and that goes around the world. Einstein’s general theory of relativity has so far failed to explain what happens in a black hole on the most infinitesimally small scale. The black hole is ‘the most extreme, chaotic and turbulent environment’ that exists”, said the German astrophysicist Heino Falcke.

“We were surprised by how well the size of the ring matched the predictions of Albert Einstein’s theory of general relativity.” Press release Geoffrey Bower, EHT scientist. “These unprecedented observations have greatly improved our understanding of what is happening at the very center of our galaxy and thus offer new insights into how these giant black holes interact with their environment,” he added.

Black holes were an unintended consequence of Albert Einstein’s general theory of relativity, which attributes gravity to the warping of space and time by matter and energy, like a mattress sinking under a bed.. His insight led to a new conception of the cosmos, in which space-time could quiver, bend, tear apart, expand, swirl, and even disappear.

In addition to Einstein, another of the scientists who set the course for research on these astronomical objects was Karl Schwarzschild, the first in identify the solution of the equations of Einstein. While, John Wheeler was responsible for make them known and popularize them; in addition to giving them the name by which they are known today. By last, Stephen Hawking was the expert who provided details about your properties y he conjugated black holes with quantum physics.

The universe is dotted with black holes, and many of them are the remains of dead stars that collapsed in on themselves and moved on. According to experts, there would be a black hole at the center of almost all galaxies, including our own., which may be millions or billions of times more massive than our sun. Astronomers still don’t understand how these supermassive black holes have grown so large.

There are different categories of black holes. The smallest are so-called stellar-mass black holes formed by the collapse of massive individual stars at the end of their life cycles. There are also black holes intermediate mass, a step forward in mass.

And finally there are the super massive black holes that inhabit the center of most galaxies. They are thought to arise relatively soon after their galaxies form, gobbling up huge amounts of material to reach colossal size.

Despite their ability to swallow light, black holes are the most luminous objects in the universe. Materials (gas, dust, crushed stars) falling into a black hole are heated to millions of degrees in a dense maelstrom of electromagnetic fields. Most of that matter falls into the black hole, but some of it is pushed out by enormous pressures and magnetic fields.

Such fireworks, which can outshine galaxies by a thousand, they can be seen throughout the universe; when they were first observed in the early 1960s, they were called quasars. Its discovery led physicists and astronomers to take seriously the idea that black holes existed.