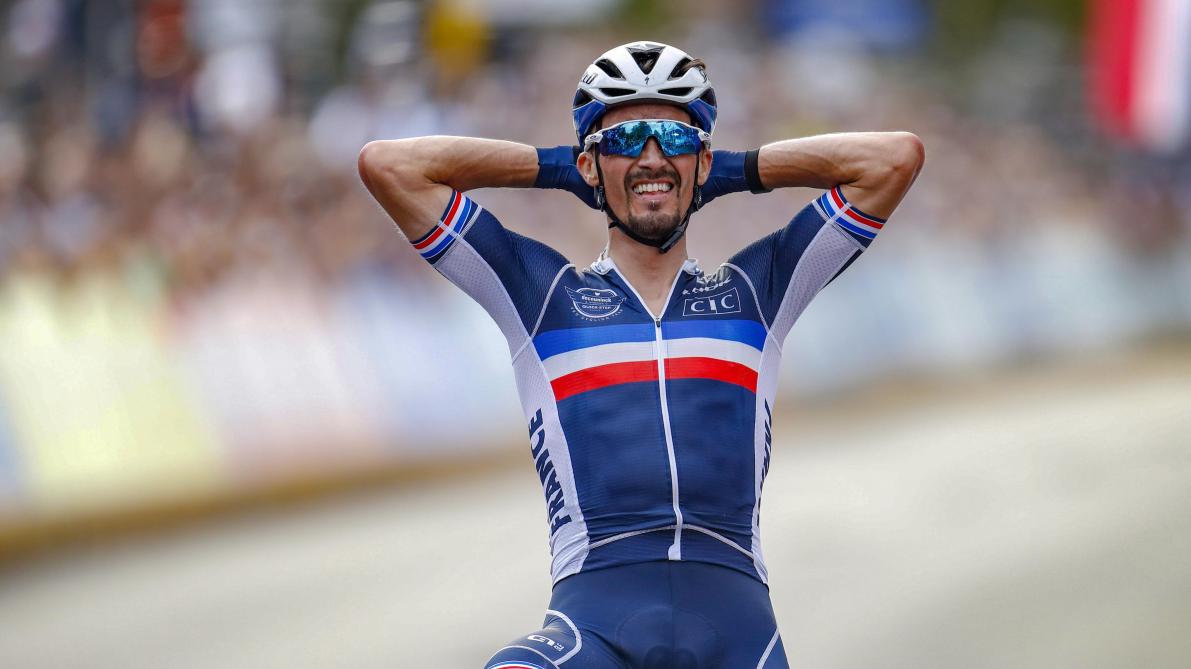 The Frenchman managed to keep his title of world champion with well-placed attacks 20km from the finish.

Julian Alaphilippe retained his title of world champion in road cycling. The Frenchman won the road race for the Worlds on Sunday alone after 268.3 km between Antwerp and Leuven. The Dutchman Dylan Van Baarle took second place, ahead of the Danish Michael Valgren, who deprived fourth-placed Jasper Stuyven of the podium.

Alaphilippe came out of a group of 16 runners 17 kilometers from the line, during the penultimate ascent of Sint-Antoniusberg. He kept 32 seconds on his pursuers.

After ten kilometers of racing, eight riders came out of the peloton: the Colombian Jose Tito Hernandez Jaramillo, the Ecuadorian Joel Burbano Coral, the Russian Pavel Kochetkov, the Austrian Patrick Gamper, the Irish Rory Townsend, the Estonian Oskar Nisu, the Swedish Kim Magnusson and Mongolian Jambaljamts Sainbayar. They arrived on the local Louvain circuit, after 56 km of racing, 6 minutes ahead of the peloton.

The French were very active at the start of the race. On the Smeysberg, after 90 km of racing, Benoit Cosnefroy placed his second acceleration of the day. Remco Evenepoel and Dane Magnus Cort Nielsen followed him to form a chasing trio comprising three race outsiders.

Swiss Stefan Bissegger reacted. This provoked the creation of a new group, with also Tim Declercq, the Slovenes Primoz Roglic and Jan Tratnik, the Danish Kasper Asgreen, the French Arnaud Démare, the British Ben Swift, the Dutch Pascal Eekhorn, the Spanish Imanol Erviti, Australian Nathan Haas, Norwegian Nathan Hoelgaard and American Brandon McNulty. This group came back to the Evenenpoel-Cosnefroy-Cort Nielsen trio. Fifteen riders therefore made up the group of pursuers behind the morning breakaways, who lost Coral along the way, while the Italians, trapped, had to ensure the pursuit in the peloton.

Stuyven at the foot of the podium

The Italian team, which had one of the favorites in its ranks, Sonny Colbrelli, brought the field back to the pursuers exactly at the halfway point. The escaped adventure ended a few kilometers later.

On the Moskesstraat, 66 km from the line, the leading group exploded. Evenepoel, Madouas, Bagioli, Van Baarle and Powless remained in front.

The cobblestones of the Bekerstraat saw Julian Alaphilippe pushing ahead. Wout van Aert and Jasper Stuyven remained attentive in his wheel. This caused a regrouping at the front, where a group of 17 riders formed, including some favorites or outsiders like the Slovenian Matej Mohoric, the Italian Sonny Colbrelli, the Dutch Mathieu van der Poel, the Briton Tom Pidcock and the Czech Zdenek Stybar.

With two laps to go, the lead was 1:50. Evenepoel let go 26 km from the finish. The attacks increased in the last 20 kilometers. Julian Alaphilippe attacked on the penultimate ascent of Wijnpers, imitated shortly after by the American Neilson Powless. The reigning world champion tried again 17 km from the line, on Sint-Antoniusberg. This time, Alaphilippe widened a small gap and could thus start the last lap alone in the lead. Behind him, a group of four ensured the pursuit: Stuyven, Powless, the Dane Michael Valgren and the Dutchman Dylan van Baarle.

Alaphilippe widened the gap while behind him his pursuers could not get along. The Frenchman did not ask himself a question. He arrived alone on the Geldenaaksevest and could savor the last mile before raising his arms to the sky.

Behind him Dylan Van Baarle settled the sprint for second place at 32 seconds. Michael Valgren completed the podium, ahead of Jasper Stuyven. Wout van Aert finished eleventh at 1:18