Skip to content
In the image, Julio Borges (EFE)


Julio Borges, named by Juan Guaidó Presidential Commissioner for Foreign Relations of Venezuela, denounced this Tuesday to the OAS that his country is approaching a “monumental fraud“In the parliamentary elections in December and called the”free world“To not recognize them.

“A monumental fraud is approaching in the coming days that cannot be indifferent to the region”Borges affirmed when speaking in an extraordinary session of the Permanent Council of the Organization of American States (OAS), held virtually.

Borges, who joined the meeting from Bogotá called to analyze the situation of Venezuelan institutions and the report of a UN International Mission on crimes against humanity, called for “set off all the alarms and make all the decisions so that the free world does not recognize the electoral fraud that Nicolas Maduro wants to commit”.

IT IS NOT ABOUT SUPPORTING GUAIDÓ OR NOT

For Borges, the important thing is to understand that the “Venezuelan drama is not ideological, it is not a drama of the left or a drama of the right“But it is”deeply a problem and a tragedy and a hecatomb and a human genocide”.

In this context, he considered that his country is in the “terminal phase” and called on the region to understand that this “Venezuelan genocide“It is not only a problem for your country but it is a” total threat to freedom and to the free world. “ 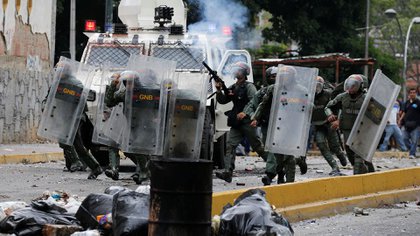 Image of a repression in 2017 (REUTERS / Carlos Garcia Rawlins)

In his presentation, Marta Valiñas, president of the Independent International Investigation Mission on Venezuela, pointed out that they have concluded that in Venezuela “serious human rights violations”Between 2014 and this year at the hands of members of the State security forces and the intelligence services of that country, both civilians and military.

“We have reasonable grounds to believe that some of these violations constitute crimes against humanity, because they were committed as part of a generalized and systematic line of conduct and in accordance with State policies,” he pointed out, referring to executions, among others. extrajudicial proceedings as part of the strategy to fight crime.

Francisco Cox, who is also a member of this mission, referred to the policy of “crush the opposition”, By the Bolivarian National Intelligence Service (Sebin) and the General Directorate of Military Counterintelligence (DGCIM), directed against“government critics with a prominent public profile“Or who were perceived as a”threat to the government”.

Cox mentioned among the crimes against them committed as part of this policy arbitrary detentions, torture, including sexual violence and based on gender violence, and pointed out that they found “reasonable reasons” to believe, after investigating more than 100 protests, that the detainees were victims of torture, cruel and degrading treatment.

“The treatment received was part of a policy and an attack on the civilian population”Alerted Cox, who attributed the arrests and torture in the context of protests to the Bolivarian National Police, the National Guard and the Sebin. 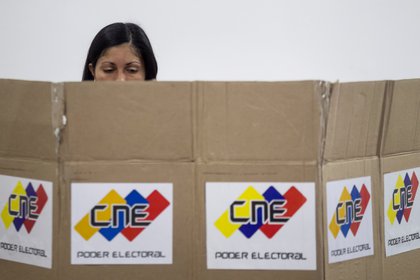 The parliamentary elections will be in December (EFE)

The executive director of Electoral Transparency, Leandro Dear, stressed, for its part, that Venezuela is approaching elections “no guarantees”, Next December 6.

The expert pointed out that as of “ignorance”By the Government of Maduro of the electoral results of 2015, that country “It has gone from a competitive authoritarianism to a closed authoritarianism”.

In this context, he pointed out that in order to hold “full” elections in Venezuela, it is necessary to build a rule of law, create professional and competent electoral bodies and eliminate the barriers that hinder universal and equal political participation, among others.

Querido considered that for the holding of democratic elections in Venezuela it is required that the National Assembly elected in 2015 be in charge of appointing the rectors of the electoral authority, the legitimate directives of the intervened parties be restored and the disqualifications that weigh on opposition leaders, among others.

MEXICO AND ARGENTINA AGAINST THE FORCE

During the session, the ambassadors of Argentina and Mexico declared themselves in favor of dialogue and against any action or threat of intervention.

“Mexico maintains its firm commitment so that Venezuelan society finds a negotiated and lasting solution through its own channel and through peaceful means. My country believes that any international accompaniment should be complementary to national efforts and always by way of dialogue ”, stated the Mexican representative to the OAS, Luz Elena Baños.

For his part, his colleague from Argentina, Carlos Raimundi, defended the principle of non-intervention and he warned about the risk of a “biased interpretation” when the focus is placed on a type of situation or a particular country.

The extraordinary session was requested by the Colombian mission to this organization, in conjunction with those of Brazil, the United States and Venezuela.