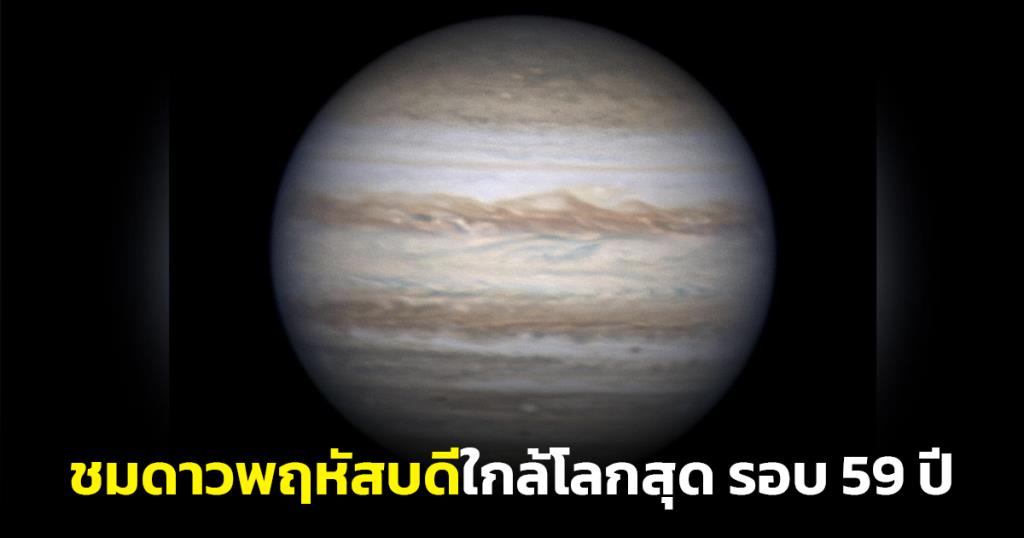 The National Astronomical Research Institute’s NARIT page shows Jupiter is the closest to Earth in 59 years, at a distance of about 591 million kilometers from Earth, and Jupiter will remain visible in the night sky until around February 2023.

On September 27, the page “NARIT, National Astronomical Research Institute” revealed the image of Jupiter closest to Earth in 59 years, recorded through a telescope with a diameter of 0.4 meters at the Observatory, Chaloem Phrakiat 7th Cycle Birthday Anniversary, Songkhla. Jupiter will be observed during this time, it appears bright in the east in the early evening, can be observed with the naked eye clearly. Throughout the night until dawn, the phenomenon “Jupiter closest to Earth in a year” on September 27, 2022 is considered the closest orbit to Earth in 59 years since October 1963, it is about 591 million from Earth. kilometer

On such days Jupiter can be observed since the sun goes down. until dawn If you look through a telescope Size 4 inches in diameter, magnified from 30 times or more, can see a band of clouds on Jupiter. and the four moons clearly Saturn also appears brightly next to Jupiter to the west.

After this, Jupiter will remain visible in the night sky until around February 2023 and will approach the Earth next November 3, 2023. In addition, at the end of 2022, there are many astronomical phenomena to follow, such as A total lunar eclipse on November 8, Mars close to Earth on December 1 and the Geminid meteor shower on December 14. For more information on interesting astronomical phenomena, please visit the National Astronomical Research Institute’s NARIT page.