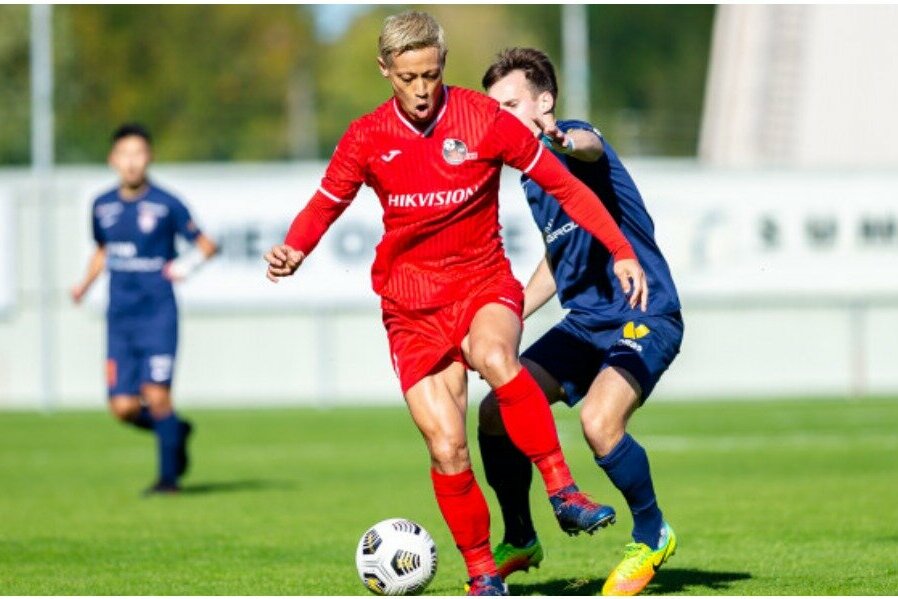 In the 30th round of the Optibet A League, Marijampolė’s Sūduva defeated Gargždai’s Bangas 4: 0 (1: 0), and the famous Japanese Keisuke Honda marked his debut in Lithuania with a goal.

At the beginning of the match, Sūduva had more control over the ball, but the first fire broke out right at the hosts’ goal. 13 minutes into the game Simonas Urbys managed a counterattack, but Ivanas Kardumas took a soft shot from the left flank that was easy prey for the alert keeper.

After this episode, the people of Marijampolė began to pose an increasing threat to the gates of Banga. His aim was initially tested by his debutant K. Honda, and soon Nicolas Gorobsov tried to throw Ignas Driomov, who had escaped from the goal area, from 35 meters, but he managed to save his goal.

The residents of Marijampolė broke the ice in 29 minutes. After a sharp pass by V. Slavickas, Olivier Rommens shot from the penalty spot exactly to the right corner of the goal. For Belgium, it was the second goal this season.

After the break, “Sūduva” felt more comfortable creating attacks, and I. Driomov had to block dangerous blows more than once. However, the shot went wide. A prompt block by Jordano N’Kololo saved the home team that time.

Victor Basadre’s students started crushing their opponents at the end of the duel. In the 85th minute, Nicoas Taravelis perfectly executed N. Gorobsov’s corner kick and scored his debut goal in the ranks of Suvalkie. Alexandros Gargalatzidis increased the lead for FC to 3 – 0, getting a head onto a hooked ball from the right.

The victory for the leader of the championship “Sūduvai” (61 points) allowed to increase the advantage from Vilnius “Žalgiris” to eight points. Wave (25 points) remains ninth.