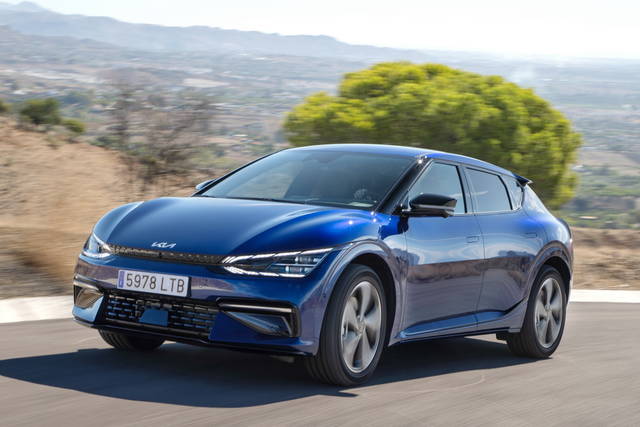 The Kia EV6 it is a medium-large electric crossover (it is 470 cm long, one more than an Alfa Romeo Stelvio just to give an idea) and it is the first Kia to use the E-GMP platform designed for electric vehicles only. The battery is flat and mounted in the floor, which has reduced overhangs and a long wheelbase (a good 290 cm). All the Italian versions have an accumulator of 77.4 kWh effective, which accepts 250 kW in direct current: finding a column of this power, in about twenty minutes you can go from 10 to 80% of “filling”. The rear-wheel drive variant has 229 hp, costs 49,500 euros and the highest declared range (528 km). Then there are the 325 hp 4x4s, with official distances ranging between 484 (this is the case of the test car) and 506 km depending on the set-up and prices from 53,000 euros. And finally the GT (€ 69,500), which will arrive in the coming months and which with its 585 HP promises a 0-100 in just 3.5 seconds. This is also the only one that as standard can transfer energy from the battery to the outside (up to 3.6 kW, like the home meter): useful when camping, or to recharge the electric bike when you are away from common sockets.

All the Kia EV6 they have full LED headlights and adaptive cruise control, as well as a 7-year or 150,000 km warranty and a valid multimedia system with double 12.3 “screen (one is for the dashboard): it is the one known and appreciated on the most recent Kia and Hyundai. It combines responsiveness, ease of use, ease of customization and a wealth of features and is one of the best you can find on a car today. Only the GT Line (like that of the text) have diode matrix headlights as standard, level 2 semi-autonomous driving (the maximum allowed by law in Europe), head-up display with augmented reality and “climate” with heat pump (when it heats the air it consumes less electricity than electric heaters). In addition, to the monitoring of the blind spot they add the function that projects images of what is on the sides of the car (captured by the parking cameras) on the dashboard when the direction indicators are activated: a solution that is as simple as it is effective.

They thought it well

If out there Kia EV6 it is low (for the type of car) and streamlined, inside it is quite airy and shows well-studied ergonomics. Between the armchairs (widely adjustable, also in the support of the thighs) there is a large console that presents, at your fingertips, the commands for travel and a convenient charging plate for mobile phones; leaving a space underneath to store a backpack or bag. The controls are easy to find and operate: in the center of the dashboard there are two wheels for the “climate” and the audio and you switch from one function to another via a button (perhaps the only slightly cumbersome aspect of the whole) . The buttons on the steering wheel are also large, physical and intuitive and the positive picture continues in the rear seats. The space in width and length is high (but unfortunately, like many cars with batteries in the floor, the legs are a little too bent) and there is no shortage of air vents on the uprights, charging sockets on the seat backs and a real household electrical socket at the base of the sofa.

Did I boot? lights and shadows

Unlike the Hyundai Ioniq 5, with which the Kia EV6 shares the mechanics, here the sliding sofa is absent: at most you can earn a few liters by putting the sofa back “upright”, going from the declared 490 liters (10 less with the more powerful hi-fi) to 511. The compartment is not small, but it is also true that several rivals offer a few tens of liters more. Not to mention that the extension in height is not much. On the other hand, the GT Lines come standard with “intelligent” electric opening of the tailgate: approaching the car from behind with the key in your pocket, it opens by itself. Under the front hood there is also a second compartment, of 52 liters (just 20 on the 4×4, and not even of a regular shape): a bit uncomfortable because it opens only by pulling a lever near the pedal board and there is also a second lid. to be opened separately, but can still be useful for storing charging cables.

Made in Korea, the Kia EV6 destined for Europe have been taken care of in the structure by the branch of the Old Continent. Mechanically, in front we find common McPherson suspensions while behind a refined five-lever multilink architecture. No electronically controlled shock absorbers, discarded mainly for cost reasons, but those with diversified response for the type of frequency were still chosen (in a nutshell: they are softer on “dry” roughness and less yielding in slow movements, as when the curved car on a flat bottom). The result is a car that gives little to the roll while not being uncomfortable. Only on marked obstacles such as very high bumps, the absorption is not of quality. But we are still on decent values ​​and it could hardly be done better, given the low-shoulder “rafts” that fit sport-type tires (Michelin Pilot Sport 4S Suv which, however, will not be on production cars). The limits of grip are high, with the car that never puts you in apprehension even if driven aggressively and even with the traction control off. And, despite the long stride, it doesn’t lack agility either. Thumbs up also for the soundproofing, even on the rough asphalt of the Spanish motorways where we were able to drive the car.

Brakes well but has little memory

The steering response is linear, which is never heavy but is neither particularly direct nor transmits much information to the driver, and to the engines. The accelerations are vigorous and progressive and, despite the mass of about 2 tons, overtaking is performed that would be “risky” with conventional cars with much more horsepower: thanks to the immediate response of the electric units. The regenerative braking of the Kia EV6 (when in release the electric units are dragged by the wheels and produce energy) it can be set via the paddles on the steering wheel on three levels plus the one-pedal mode (which the house calls i-Pedal): with this function the brake-motor is like this marked that you drive only by modulating the right pedal, leaving the mechanical brakes only to emergencies or almost. A small mole? If you want to use it all the time, the i-Pedal must be reset every time the car is started because the EV6 does not “keep it in memory”.

ADVANTAGES
> Habitability. Inside there is a lot of “air”, especially for those behind.
> Interior. They combine design, space and practicality, thanks to physical controls, many charging sockets and many “clever” solutions.
> Multimedia system. Difficult to find defects: the screen is large and responsive, the software rich and intuitive and the graphics “fresh” and easily customizable.

DEFECTS
> Absorption with 20 “. The EV6 is certainly not an uncomfortable car, but passing over the most marked retarders you “dance” a little.
> I booted up. For the size of the car, the one behind is not large and is also low and without a double bottom (underneath is the engine). Uncomfortable and small the front one.
> I-Pedal control. It is easy to operate but if you always want to use it it must be reset every time you start the car.