Kiev protested against Russia for sending baby food in the Donbass

The Ministry of Foreign Affairs of Ukraine sent a protest note to the Russian authorities because a humanitarian convoy was "illegally transferred" to the "temporarily occupied" Donbass. On this on his Twitter page I wrote representative of the Katerina Zelenko department.

According to Kiev, this convoy is already the 87th in a row. In a statement, Zelenko called him "pseudo-humanitarian". The Ukrainian protest note indicated that the Kremlin was violating the Minsk agreements. The department also invited Russia to "adhere to its commitments".

The humanitarian convoy of the Russian emergency ministry arrived in the DPR on the eve of October 17, KP Donetsk said. Several tons of baby food were brought in trucks. According to the DPR's Ministry of Emergency Situations, a total of 48,000 sets of baby food were brought to the self-proclaimed republic, aimed at children from one to three years. The incoming cars were unloaded in Donetsk warehouses, according to the DPR Ministry of Emergency Situations


Convoy of peace: how humanitarian aid was brought to the Donbass 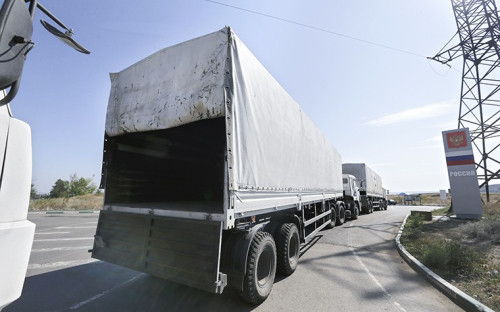 The first humanitarian convoy from Russia to the Donbass was sent in August 2014 after a corresponding order from Russian President Vladimir Putin. Russia and Ukraine have agreed at length on the shipping order. Furthermore, it was considered the option for trucks to cross the border section in the Kharkov region controlled by the Ukrainian border service. However, Ukraine refused to let him in, saying that Ukraine would only accept shipments from the Red Cross.