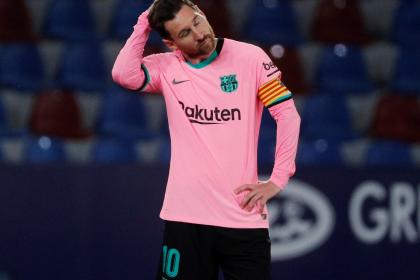 Is Lionel Messi’s long-awaited renewal at risk? The very Spanish League says it!

LaLiga president Javier Tebas warned that the Argentine may have to leave FC Barcelona due to the salary caps required by the tournament.

In an interview with La Sexta, the manager was clear when answering if he saw Messi playing LaLiga next season: “I don’t know. If there are no exits, it’s impossible.”

What exits are you talking about? It so happens that Messi’s renewal has taken so long because its cost raises the wage bill above the limits. Considering very high salaries such as those of Griezmann, Coutinho, Dembelé, Ter Stegen and others, to give a few examples, the issue is unmanageable in Spain and before FIFA.

According to Sport, the president Joan Laporta has already convinced Messi to lower his aspirations and distribute the token that he should receive for the next two seasons as a club player in installments, just before he goes to MLS for his retirement. At that point the club offers to continue linked but in functions that are not decided. But still no cash has been made with the outputs.

The club for now has loaned Júnior Firpo (to Leeds, for 15 million), Jean Clair Todibo (Nice, 8.5 million), Francisco Trincao (loan to Wolwerhampton) and Mattheus (loss). But it’s not enough. “One thing is to exceed the salary limit and another that they can incorporate or renew players with the 1×4 rule, for every four euros they save, one euro can be incorporated,” explained Tebas.

See also  World tennis returned after four months and the first winner is an Argentine: Podoroska won in a tournament that has a case of coronavirus

And what is the cap? “Let us remember that the salary limit of a club is the result of subtracting sports expenses from income. Taking into account that the Blaugrana club has seen its income reduced by 300 million due to the effects of the COVID pandemic, at this time it has to reduce the wage bill by around 30 percent, which currently amounts to just over 600 million, “explained the Catalan newspaper. For now they are far away and that will delay, even more, the renewal of Messi.