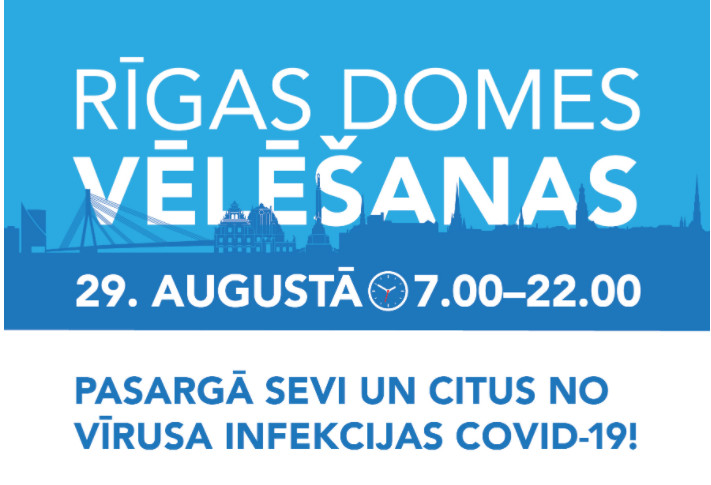 At least a third have not yet decided which party to vote for, because it is really very difficult to choose. Politicians across the spectrum have become so distraught and failed that many are disgusted rather than ardent. However, it is definitely necessary to go and vote, because otherwise it will be much worse – the high gentlemen will decide that they can continue in the same spirit, because the electorate is a dumb mass that sees nothing and cannot appreciate anything.

The political process in Latvia and Riga has turned so badly that the “Russianness” or “Latvianness” of political parties is still inadequate. It corrodes thinking like acid, making it difficult to judge candidates on their competence in sewer lids, trees, school roofs or rubbish bins. Although the issue of elections should be about the city’s economy, politicians like to push to the fore topics and an environment in which they feel more comfortable and where there is no responsibility – history, foreign policy. Scares the audience with messages about idiotic reforms in taxation, health or education, but then comes as rescuers and heroes fighting against their own threats.

According to a long tradition, the National Union, which has a well-established circle of staunch supporters and which could do nothing in the campaign, feels best in elections, because the number of seats in the council cannot increase or decrease significantly. It is likely to have about the same number of seats as before – not very large, but enough to hope for power and positions.

In the opposite wing, however, everything is no longer as simple as before. Now there are some competitors in the “Harmony” niche, who, even if they do not enter the city council, will bite a piece of it. Some voters may be confused when they see the New Agenda list and think that it is now the right one to vote for. The Latvian Russian Union intensively advertises in the target audience and attracts those Russians of Riga who live in Putin’s information space and sweetly remember the Soviet times.

A voter who does not accept these three lists is also confused and does not know what to do. The coalition parties forming the government do offer such young people, but there is a reasonable suspicion that they are nothing more than dolls of party bonsai and curtain sponsors.

Party bonzes have always done this as cynically deceiving the electorate, immediately after the 13th Saeima elections, showing their true face – ridiculing doctors and teachers with unfulfilled promises to increase salaries, sevenfold increase their funding from the budget, using Covid-19 in an undemocratic way. push through the law of administrative territorial reform. Thanks to government parties, the population is under constant stress from the ever-increasing power press – new restrictions, penalties and inadequate payments are emerging wherever you look, of which the OIK is just one of the spending lines. The government is wise to raise taxes further because it cannot figure out any other way to fill the treasury. At the same time, everything is being done to prevent investors from coming to Latvia, production from developing, transit, transport and logistics from collapsing. The local government has been expelled from the board of the Freeport of Riga and only representatives of ministries have remained, and the government has already proved that it does not know how to manage there – the volume of transshipped cargo has decreased by a third.

In the harshest days of the Kovida panic, the government banned thousands of people from work, leaving them without money, but only the elect received any state support. Under the guise of Covida, billions are borrowed according to incomprehensible criteria, and the purchase of masks and medical equipment is also interesting. The parties without any shame dismiss professionals from their positions and seat their relatives, party members and those close to the party. There, even Nils Ušakovs and Olegs Burovs, with a list of all ugly scandals, look like light lambs side by side. Is it not the case that the loudest scamers about corruption in the city council are themselves the biggest corrupters? Can there be illusions that the same political forces will act in a different way in the Riga City Council?

See also  Do you also have a yellow dust layer on the car? No, that is not due to Sahara sand

Unfortunately, however, the time of illusion is

because party ratings show that it is human nature to forgive a politician, even if he mocks and spits in his eyes.

The coalition’s five parties, if you can believe the ratings and if you don’t count the half-collapsed KPV LV, have a pretty good chance of rolling.

Can the ratings be believed? Can’t believe it! Only God can be believed.

Ratings are opinion polls conducted through surveys. When you see ratings, you have to add your mind and appreciate that society is not homogeneous – they are undecided, they are jokers, they are shy, they do not reveal the right choice, they are hesitant, they change their minds, there are ten different informative bubbles in the Internet. the trolleybus or the market have completely different thoughts and priorities. Sociological firms use similar methods and methodologies in part, but it is not the same for everyone. Unfortunately, their work is impurely used to manipulate public opinion. This time, it is especially propaganda that there is no need to vote for those parties that have low ratings – that is how the voice will be cast on the ground and in that spirit. Unfortunately, the Latvian public media have just been quite openly on the path of the ruling coalition, and there is no more objectivity or solidity. Probably, for those voters who do not see the point of voting for government parties, one of the alternatives is the Greens and Farmers Union (ZZS), which has not been in the Riga City Council so far and has been operating in many other Latvian municipalities for many years. Understandably, competitors will not suffocate and suffocate when they feel the increase in the influence of this party. It is normal. But abnormal is one of the wrong ways to do it. While other parties are memorizing numbers and facts in order to stand out more brilliantly in the closing debates of Latvian Television’s pre-election, ZZS is forced to look for lawyers to try. About what? The thing is that LTV, in order to serve the government coalition, tries to make it so that the ZZS is not in the council or at least has as few seats as possible. Television has drafted the criteria by which some parties are invited to a debate and others are not. Those with a rating below 4% remain on board. Although one sociological company shows ZZS 6%, but another – 7.8%, television has chosen the rating of the one company that shows the least for this party as a criterion. An LTV employee has told the party that its representatives will not be invited to television. ZZS then has nothing left but to threaten with court actions. Maybe in the end ZZS candidates will still be invited, but the black work has already been done – while other athletes are preparing for the 100-meter sprint, a runner in a ZZS shirt must run a circle with barriers first to get to the starting point. The rulers like to criticize Russia and Belarus, but the understanding of democracy is not much different. The course is on Brezhnev-era Central Television, which showed only one correct line. And Latvia lacks such methods of recalling rivals as not registering candidates for elections without any real legal basis.

Anyway, let’s wake up on the morning of August 29 with good thoughts and start influencing Riga municipality! There is no way to choose from. Let’s wish for a shameless propaganda brain massage in spite of it! This is the only way to influence. After that, such opportunities may not exist for almost five years.