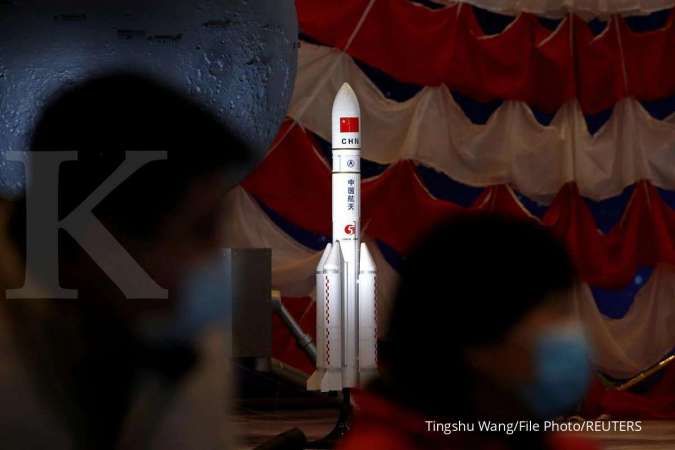 ILLUSTRATION. A model of the Long March 5 Y5 rocket from the China Chang’e-5 Mission lunar exploration program is displayed at an exhibition inside the National Museum in Beijing, China March 3, 2021.

KONTAN.CO.ID – BEIJING. In a bid to tackle the threat of a catastrophe from outer space, Chinese researchers plan to send more than 20 of the largest rockets to practice deflecting a giant asteroid that could hit Earth at any moment.

Film-style asteroid deflection method Armageddon this seems to be starting to get the attention of space scientists because in principle it is quite possible to do it.

Reported from Reuters, researchers at China’s National Center for Space Science, have simulated the destruction and deflection of an asteroid with a domestically made Long March 5 rocket.

Researchers found that 23 Long March 5 rockets could deflect a large asteroid from its original path by a distance of 1.4 times the radius of Earth. The condition is that all rockets must hit the asteroid at the same time.

Their calculations were based on an asteroid named Bennu, which orbits the sun, which is as wide as the Empire State Building.

In size, the giant asteroid belongs to a class of rock that has the potential to cause regional or continental damage. Asteroids stretching more than 1 km will have global consequences.

The Long March 5 rocket is key to China’s short-term space ambitions. These rockets have performed a number of important tasks, from delivering space station modules to launching probes to the Moon and Mars.

China has successfully launched six Long March 5 rockets since 2016, with the last one causing some safety concerns as the remains re-entered the atmosphere in May.

Rated as a good idea

Professor Alan Fitzsimmons from the Research Center for Astrophysics at Queen’s University Belfast, said the fictional asteroid-destroying method was a pretty good idea.

“The proposal to continue research on making one large kinetic impactor to deflect asteroids, is a rather good concept,” he told Reuters.