Paulo Abrao, secretary of the Inter-American Commission on Human Rights, during an interview. There are 61 complaints about the Brazilian leader for abuse of authority in the workplace that the agency did not investigate (Reuters)

“We’ve been having a bad time for a long time“, said to Infobae an employee of the Inter-American Commission on Human Rights (IACHR) when he was asked about his time at the head of that body of Paulo Abrao, the executive secretary who led it for the last four years and created an unprecedented internal division in the history of the institution. Under total anonymity for fear of retaliation, the woman insisted: “This is a relief”.

With “relief”, the victim of labor abuse referred to the decision that was taken in the week to prevent the questioned leader from continuing in his functions. This Friday, the secretary general of the Organization of American States (OAS), Luis Almagro, defended his veto to Abrao, claiming that it has “61 complaints”And that the entity he directs has done nothing to clarify them.

Almagro has blocked the renewal of the mandate of the denounced Brazilian leader, in force until August 15, despite the fact that the commission itself had agreed in a divided ruling that it would continue for four more years, until 2024, without giving rise to an investigation of the serious accusations against him. “The news about the veto of Abrao was a vindication“Said another executive who survived the”lies”That the old boss was trying to impose and who also opted for the off the record.

“We love the Commission and Abrao is not going to do it any more harm“Commented another woman with 20 years of seniority in the body who claimed to have suffered”isolation” and the “humiliation”Constant on the Brazilian side. At such a level that she was about to be admitted for psychiatric reasons. “This decision implies a recovery in confidence in the OAS”Added the lawyer with extensive experience in human rights. The messages among the workers who suffered four years of “nightmare” multiply: “An old colleague called me in tears telling me that the fight was finally worth it.”.

Almagro, who had already argued his decision days ago publicly, has explained that he does not have “no interest”In electing the secretary of the CIDH, but ask that this person “have personal, moral and professional suitability for the performance of their duties”, Something that, in his opinion, is not fulfilled in the case of Abrao.

The Secretary General of the Organization of American States (OAS), Luis Almagro (EFE)

”In no way will I incorporate or reincorporate any person on whom 61 complaints hang“, He added, giving details for the first time of the accusations that weigh on the current leader:”Conflict of interest, differential treatment, serious setbacks in the transparency of the processes, retaliations and violations of the code of ethics, impunity for complaints of sexual harassment, to name a few”.

Almagro has reproached the CIDH during “more than a yearDo not make an effort to prove the innocence of Abrao and that even “practically immediate”Express your desire to renew the person in charge of the commission. This inaction, he pointed out, “shows a very serious functional situation”.

The head of the OAS He has said that this case has made him think about the victims of workplace harassment and how “the system makes them invisible, mutes them, crushes them”. “How the accused moves the system, how the system covers him regardless of anything and even less the rights of the eventual victims”, Has asserted.

The attorney who spoke with Infobae about the years of Abrao in front of the Commission noted that his “voices were invisible“And that he was surprised that no one internally wondered what could happen to”the victims”Since it was an organization that defended human rights. “I suffered internal persecution, public humiliation, constant degradation, isolation and withdrawal from my tasks … all this abuse led me to a deep depression, to have suicidal ideas”.

Among the harassment mechanisms that were denounced, the mistreatment and isolation to which historical employees of the international organization were subjected stood out. “Abrao lied, he lies systematically. It created a wicked work environment. He is a master of manipulation. And when you confronted him with the numbers he wanted to adulterate, he defended himself by saying that we disrespected him. Immediately afterwards, the statements and tweets with the wrong numbers were issued, despite everything“Said a source. 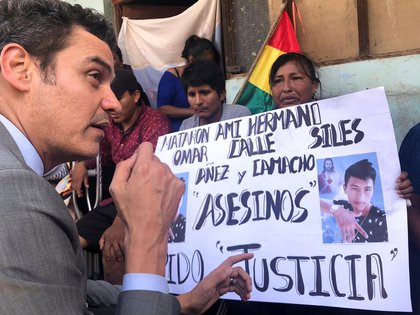 Paulo Abrazo in Bolivia, during marches in favor of human rights (Reuters)

“He lied so much that he said his recent vote had been unanimous and it was not,” added another worker who has lived in Washington for 15 years. “He got very angry when you confronted him with the false information you proposed. At the beginning of 2017, in a meeting in which many of us participated, when a historical director of the institution marked everything she said in the wrong way, she exploded, took her arm and yelled at her to be quiet”.

Almagro came out in defense of the employees of Abrao that presented the complaints and corporate responses from other institutions that came out in support of the challenged leader instead of trying to delve into the accusations.

Thus, it has ensured that organizations like the UN High Commissioner for the Rights Humans, Human Rights Watch (HRW) and International Amnesty “ignore basic labor rights“With his interventions in this case, claiming that”corporate and denial responses are not the best way to give justice or guarantee Human Rights”.

For the diplomat, it is not only about “complicity passive“, But”concealment active”. “All this in the name of something that has never been or will never be at stake: the autonomy and independence of the IACHR.”, He added.

(With information from Europa Press) .-

Latin American activists denounced the human rights violations of the dictatorships of Venezuela, Cuba and Nicaragua